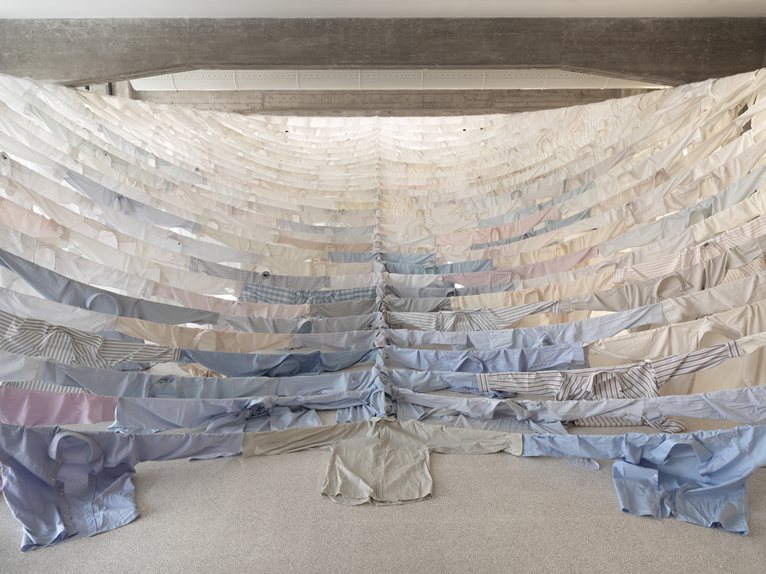 Conceived specifically for the former factory of Max Mara fashion company, now housing the Collezione Maramotti, the large installation Are We Still Going On? by Kaarina Kaikkonen follows and accompanies the compositional structure of the building, an interesting example of brutalist and organicist architecture from the 1950’s.

Watch the video about ‘Are we still going on?’ 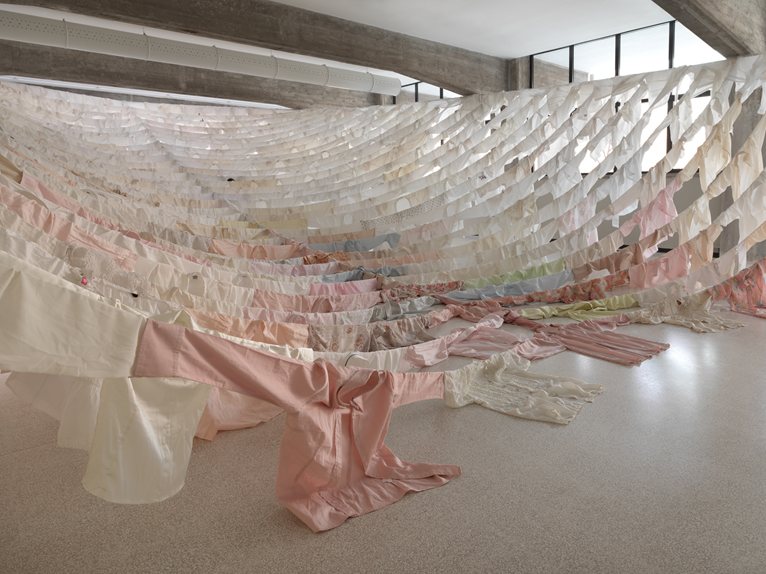 The old entrance to the factory − where the artwork was created − is ideally divided into two areas; the horizontal beams in reinforced concrete linking the pillars, not only provide the space with an architectural rhythm, but also become part of the artist’s work. 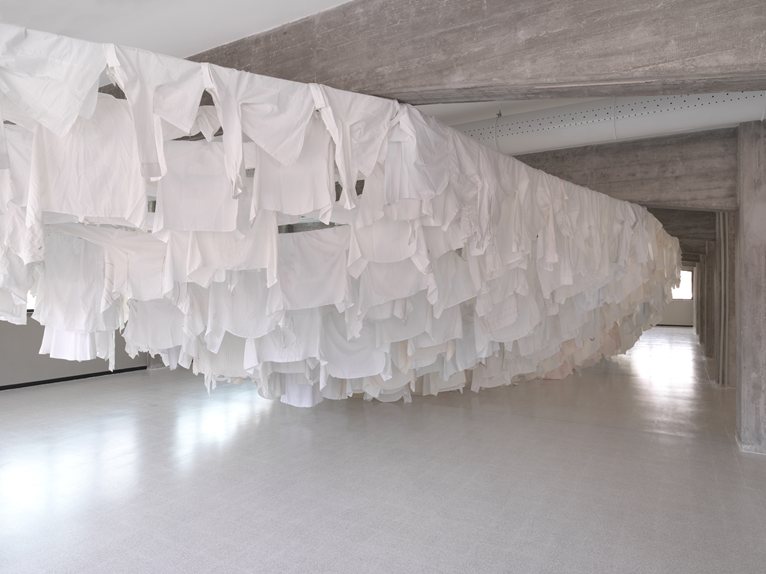 The installation is composed of two symmetrical structures evoking the skeleton of a large boat. The plain hull is subdivided into two sections developing from the ceiling down to touching the floor, with the same half-circular compositional rhythm created with garments tied and knotted together. As for the colour choice marking the two complementary structures, the garments evoke a symbolic dialogue between the masculine and the feminine: lighter on one side; with colder hues on the other. 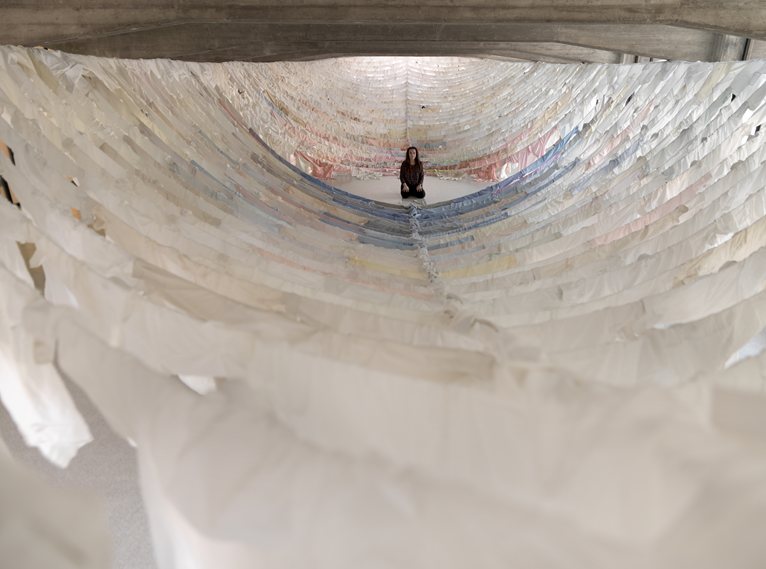 The whole ensemble exudes a colour combination of harmonious beauty.

In Kaikkonen’s works, objects become alive and speak to us of stories, of people. They also – and specifically – talk of her. They evoke frailness, but also hope and regeneration. They seem to evoke in viewers an emotional, personal experience, and at the same time a sort of mirroring, an identification in the community. 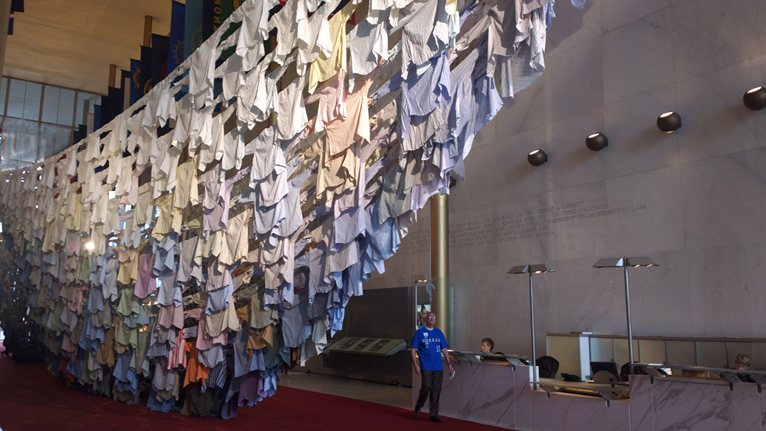 The big installations represent a community of passing-through voices, in a dialogue with nature and social spaces, in their being the story of each and every one; a story openly conveying a universal feeling each of us may identify with, and draw what is perceived most intensively. 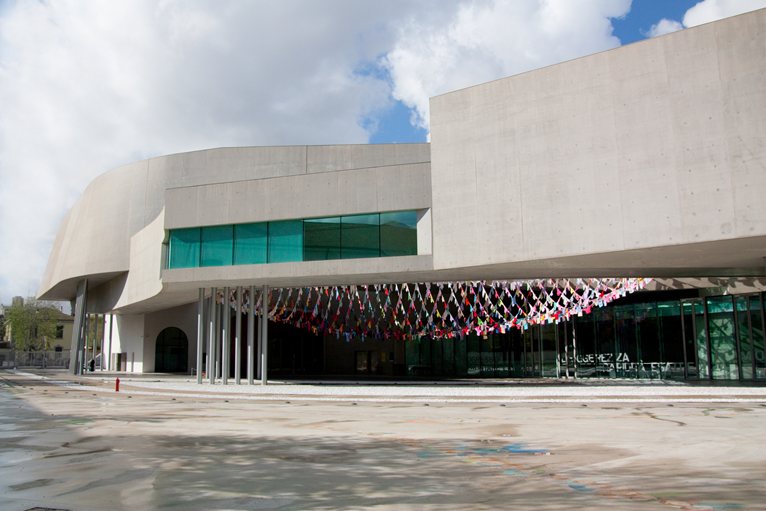 Alongside the monumental features of her works – always strongly imbued with the environmental and architectural elements surrounding them – there is also a core linked to the impermanence and frailty of materials somewhat pointing back to the frailty of human beings. 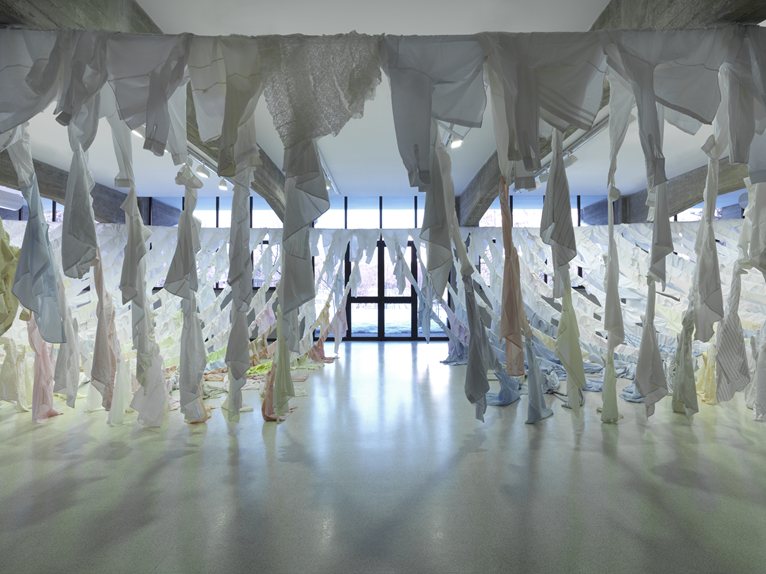 During the preparation of her work, the artist will also hold a lecture titled Memories, about her installation and her work in general, with the participation of Italian and foreign educators and scholars in visual art education. The talk has been organized in collaboration with Reggio Children. The exhibition runs until April 21th 2013.