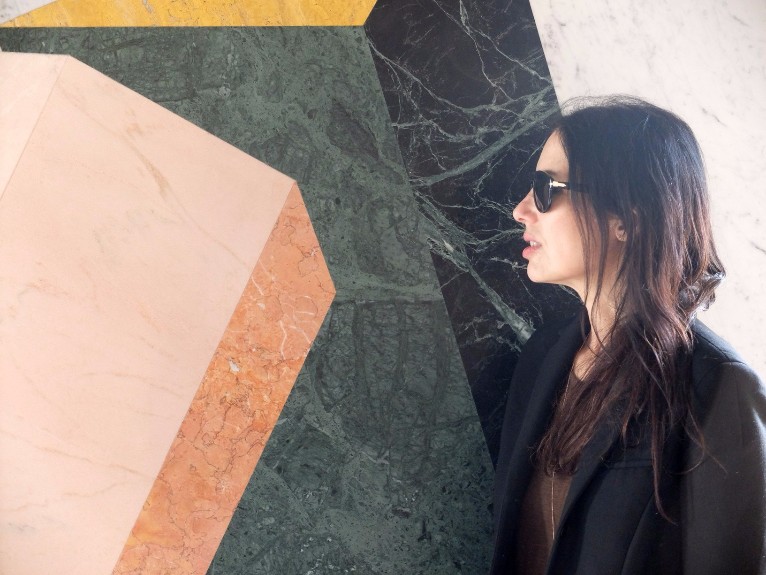 Natural light fills a flat in a nineteenth-century building on Via Solferino. It’s Gabriele Salvatori’s new Milanese place. It’s in the same courtyard where the company’s showroom is. As the showroom, just a flight of stairs away, Casa Salvatori interprets art and stone as mutual extensions.

Elisa Ossino, the designer, perfectly expressed this concept with an idea which is a summary of the years of cooperation with Salvatori.

“Elisa knows Salvatori’s style very well – Mr. Salvatori explains – and she just knows how to make my personal taste real. It was natural choosing her as a partner to design the interiors”.

The idea to let architects and designer meet originated Casa Salvatori.
‘It often happens that a professional relation becomes real friendship. It’s one of the best things in life. Work is diluted in a smile. The day comes to an end and why not? Let’s hang out together. I thought it could be nice to have a cozy and relaxed space where to host friends, have a chat, eat and play some music: my second love. Someone suggested that house warming brings luck and I couldn’t wait: let’s do it now!”. 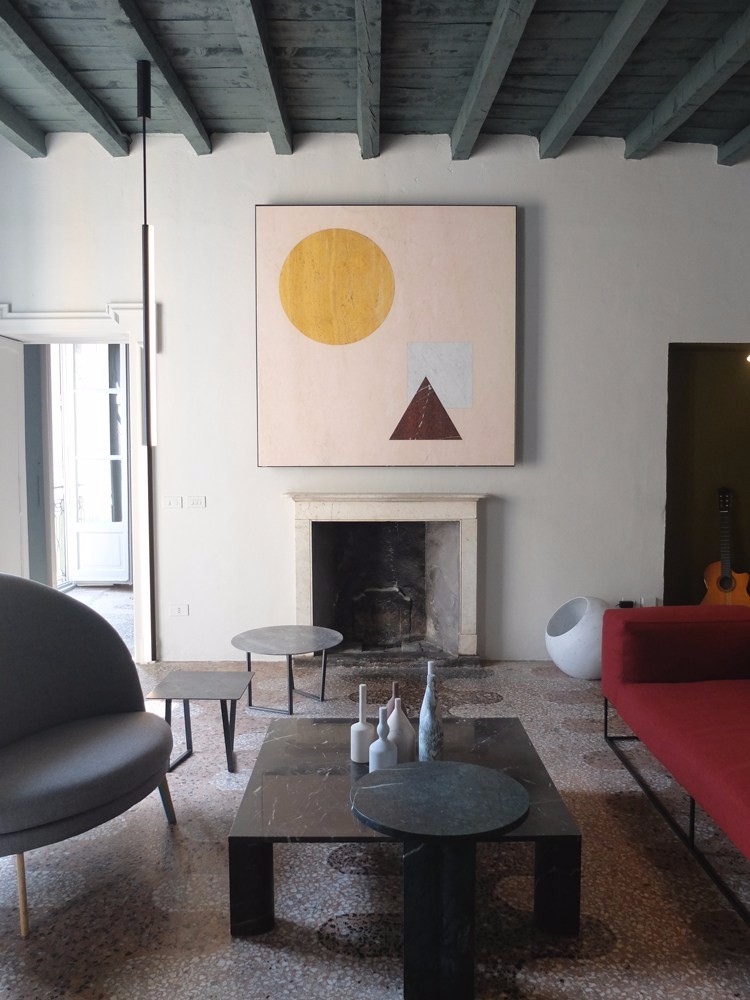 The same approach moved Elisa to invite us to get to know this space, telling us in detail about her designing choices.
“Gabriele Salvatori – she says – gave me this project to work on: “I’m leaving for the States. These are the keys. It’s up to you now”. He liked the project draft immediately, and that’s how we started”.

It’s the first intervention that tells us about Salvatori’s history tied to stone, marble and the constant research that the company carries out on these materials. The geometric patterns and the continuous contrast between cold and warm tones that fill up the house are the results of a proof of concept using marble and stone as big canvases to be painted. 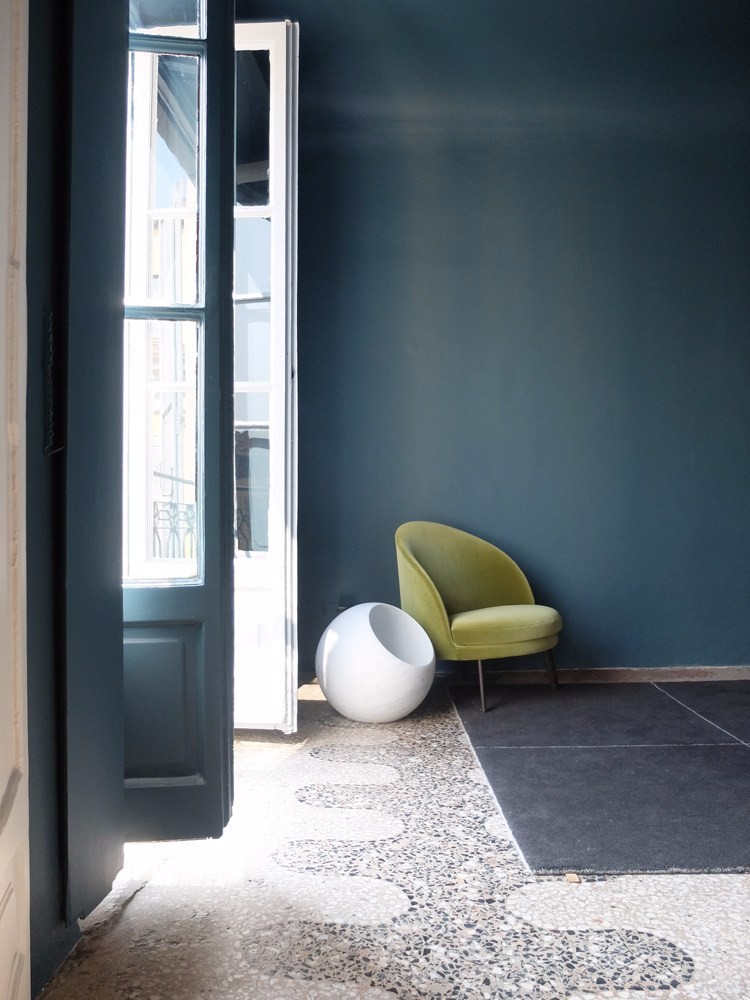 In fact, Salvatori’s history narration begins with two big panels hanging on the wall in the first room which reinstate in a contemporary way the inlay work technique thus becoming real three-dimensional paintings.

“These geometric tableaux – Elisa explains – were made with water cut and glued marble pieces. A complex choice regarding crafting and for the slabs because I wanted to use light, mid tone, and dark colors to confer this three-dimensional effect as if light hit the tableaux sideways”.

Another important research was done on color for this project.
“Since the house tells us about Gabriele’s lifestyle, he’s passionate about music – Elisa says – further research was put into chromatic effects because it seemed to me the most convivial way to welcome friends in music.” 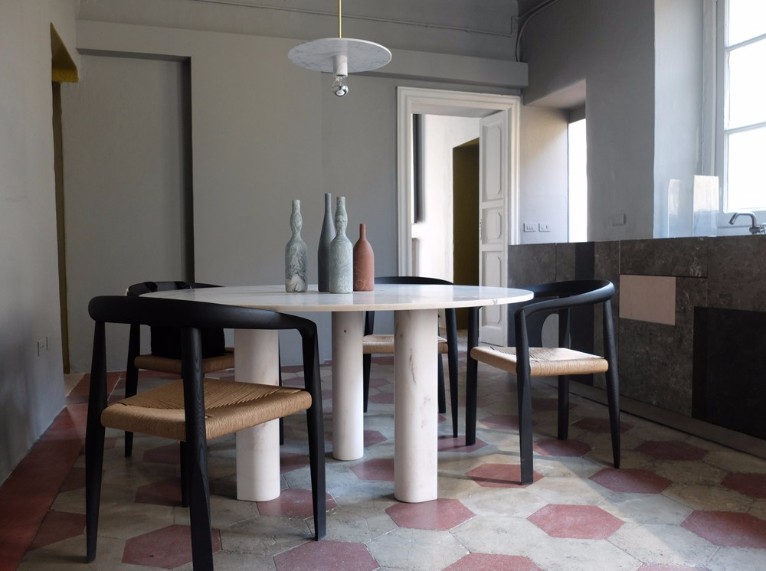 The flat’s classical style, highlighted by pre-existing elements such as the fireplace in the living room and the original marble aggregate flooring and it is thus transformed by a vibrating palette in which warm and cold tones are in continuous contrast.

The palette starts from the ceiling of the first room. The beams were brought back to life after the removal of an old false ceiling. They were painted green: a color used on the next wall and in other rooms in different nuances. In the dining room a brick colored ceiling, in contrast with the green tones of the walls, recalls the stone flooring and it connects with the pink hallway which in turn is in contrast with the tile pattern. 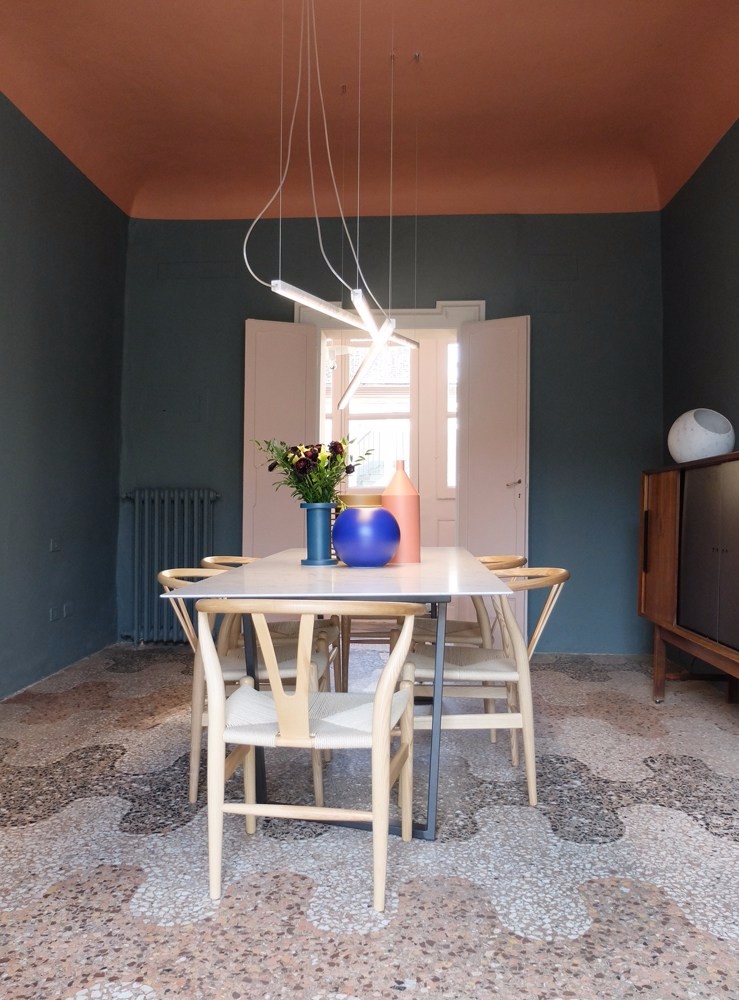 It’s an intensity crescendo that goes on to the bedroom which becomes a blue box with vivid green grids.

The kitchen design arises from the idea to show how versatile marble is.
“Also the kitchen - Elisa comments – is the outcome of a quite complex design research. The kitchen appears to be hyper-minimal. Actually, it hides careful designing aimed at building a kitchen with really thin surfaces”.

The kitchen block, which recalls the geometric patterns in other parts of the house, is treated as a canvas where the Avola Stone and the Gris du Marais are combined with Carrara and Portugal Pink marbles. 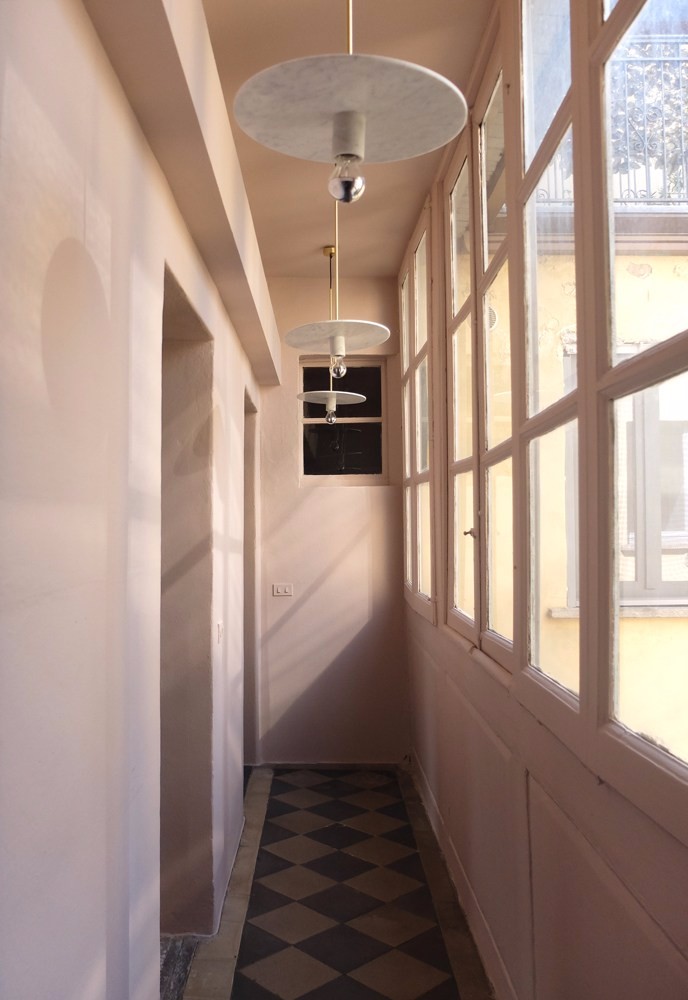 The bathrooms present some typical Salvatori textures. Just like Tratti, designed by Elissa Ossino herself, which comes with several modules and an insertion of black iron or brass. 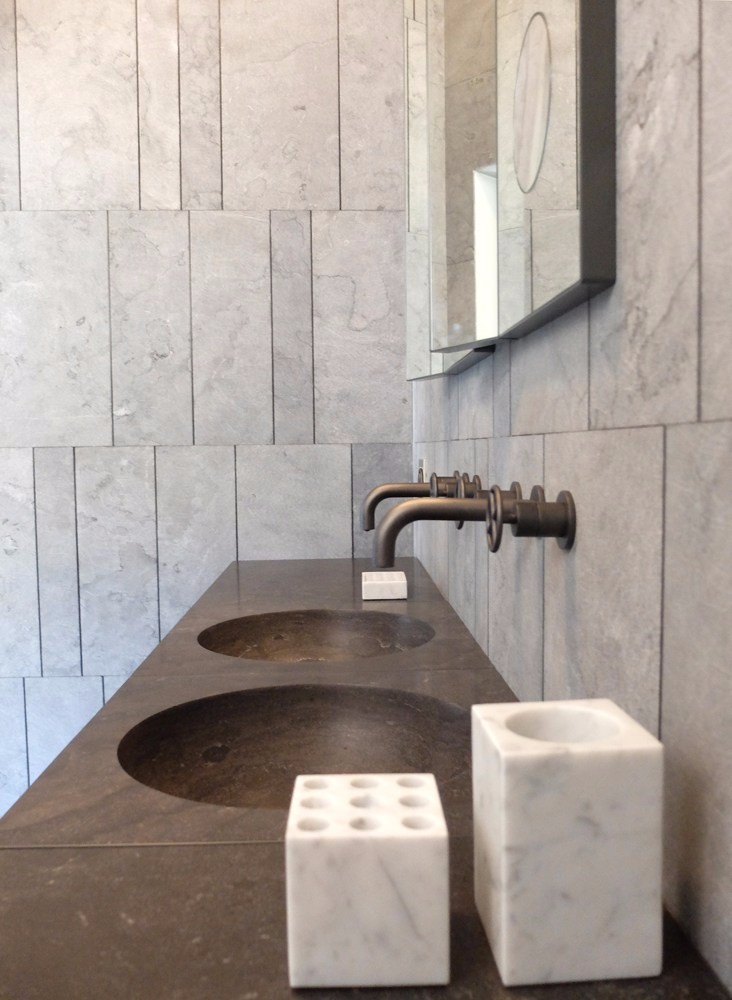