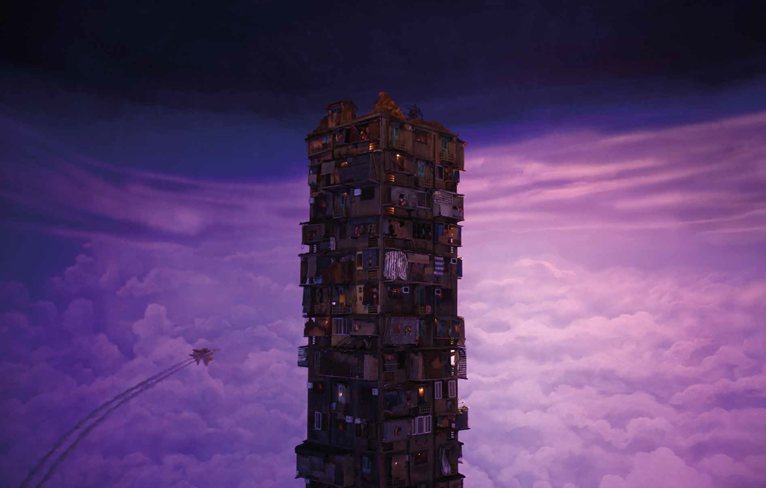 "Cities, like dreams, are made of desires and fears, even if the thread of their discourse is secret, their rules are absurd, their perspectives deceitful, and everything conceals something else." Marco Polo

Like Marco Polo stitching together pieces of other people’s memories of cities he has never visited, Nguyen Manh Hung creates sculptures of cities that waver between a lost past and a possible future. Living together in paradise 2009 is a three-metre-tall sculpture of an apartment block whose tenants’ makeshift renovations are clearly visible, while the lower floors are concealed by thick layers of white fluffy cumulus clouds.

Nguyen’s use of found materials adds to the sense of dislocation created by the presence of clouds. Global cities are looking
increasingly similar with the same group of starchitects commissioned to repeat their signature structures in steel and glass. Meanwhile, slums across Asia, Africa, and South America are characterised by their use of corrugated iron and tarpaulins, as seen in Living together in paradise. 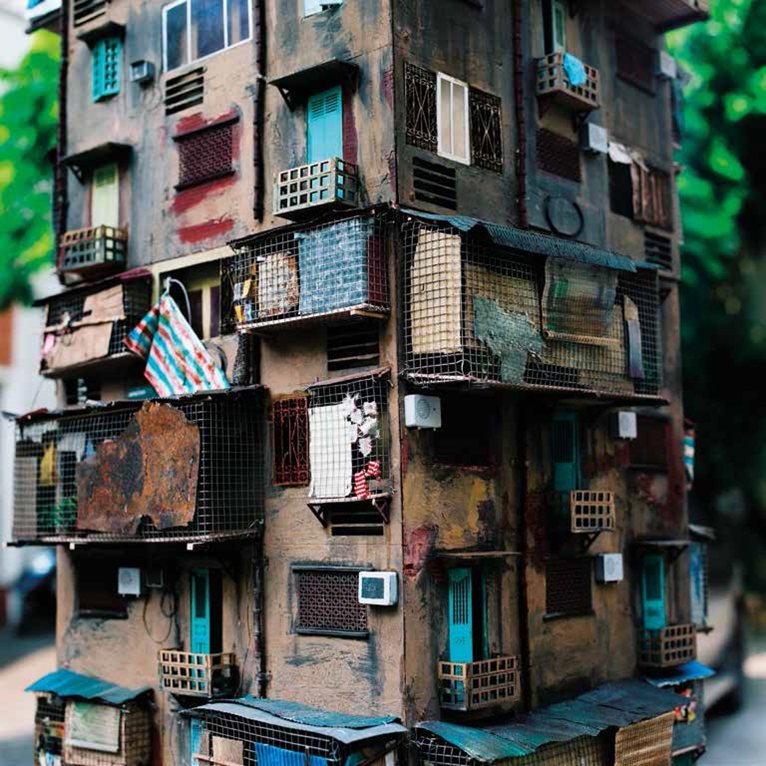 Similar to the way Marco Polo envisioned cities unseen, the French influenced Vietnamese unit block, with all its eccentricities and
embellishments, is preserved in the imagination of the traveller and the tourist. Nguyen notes, however, that there are very few examples left intact in his country, as the government’s measures to conserve them have come too late.

The Soviet influence on North Vietnamese architecture can be seen in many of the apartment blocks in Hanoi, especially the khu tap the (microrayon). With their four or five levels and shared kitchen and bathroom facilities,4 they were often operated by the government who allocated two or three families to a single unit.

Balconies were commonly extended to create additional rooms. Resembling cages, they were referred to as chuong cop (tiger cages), and in Living together in paradise, they can be seen on multiple levels of the structure. Nguyen describes his experience of growing up in one of these Hanoi apartment buildings as similar to that of village life: everyone knew everyone else’s business, residents took over public areas for their own private use, and gardens bloomed on every ledge and balcony touched by sunlight; small upgrades to the general living conditions took place in every millimetre of available space. 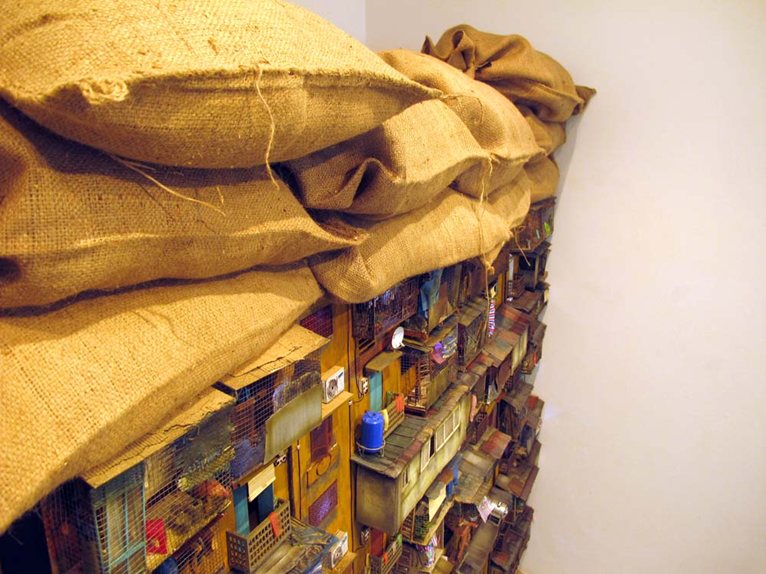 While the design of cities, and their slums, is becoming increasingly generic, it is through an examination of the way these spaces are inhabited that we find unique elements. Nguyen’s work is less about representing the architecture of Vietnam than it is about how the Vietnamese inhabit their cities. In spite of the major developments that have taken place throughout Vietnam since his childhood, Nguyen suggests that the average tenant continues to colonise even the smallest space available to them, ensuring many twenty-first-century buildings do not look that dissimilar to those of the past.

Nguyen refers to these structures as ‘vertical villages’ to draw attention to what he perceives as Vietnam’s inability to shed its rural past, so its people inhabit their cities as they do their villages — people regularly meet up to gossip around the vegetable patch, although today’s urban equivalent tends to be precariously balanced on narrow ledges and windowsills. With this in mind, Nguyen often represents a market garden, equipped with village gate and piles of straw, on the roofs of his apartment buildings. It is a way of foregrounding the desires of his ‘vertical villagers’. In this sense, Nguyen Manh Hung creates images of cities that try to balance the uneasy alliance between past and present, which he sees as precariously coexisting in contemporary Vietnam.

"Vertical villages" is included in the Asia Pacific Triennial of Contemporary Art in Brisbane,  the only major exhibition series to focus exclusively on the contemporary art of Asia, the Pacific and Australia, that runs until 14 April 2013.