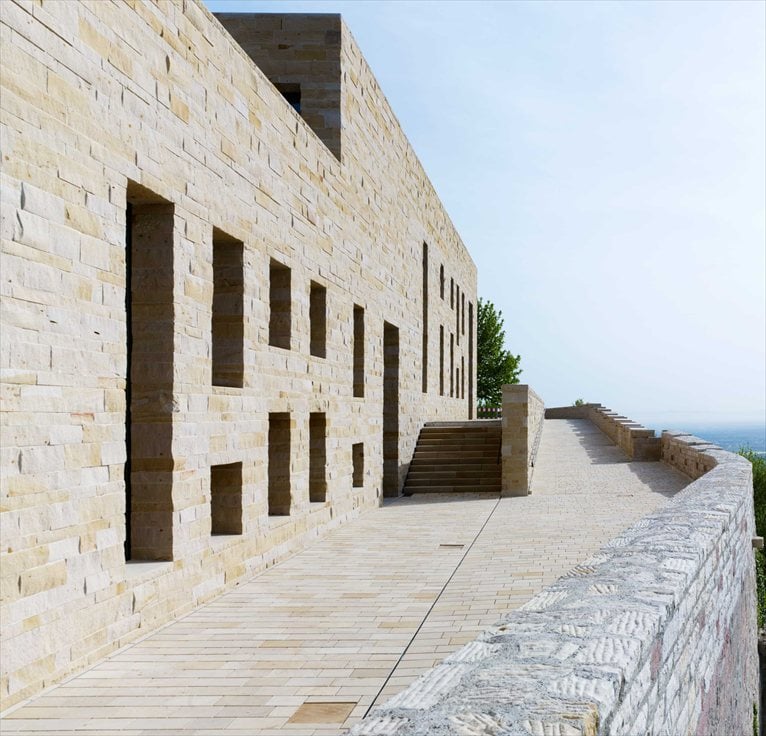 The jury was won over by the respect shown by Max Dudler for the old and its flawless combination with the new, a feature of this building ensemble. The jury of curators, architects and architectural critics, chaired by Roger Diener, voted unanimously for the sensitive extension work undertaken at the historically important castle.

The jury praised Dudler’s architectural intervention as “exhibiting a flexible repertoire of form, neither doggedly adhering to the present day, nor being unduly held back by the past, enhancing the castle’s appearance through the new architecture’s inherent vitality and flexibility” (Roger Diener), “a continuation of the European urban project through the creation of a magnificent public space” (Peter Cachola Schmal), “timelessness within a protective layer which both frames and reinforces” (Meike Weber), as well as “contemporary architecture that is neither reconstruction nor mere repair work” (Lars-Christian Uhlig).

“Within the rigidity of the stonework, Max Dudler finds an architectural form which transcends fashions” (Christian Richters), “creates an effortlessly sculptural extension” (Claudia Meixner) and “a persuasive embodiment of the concept of ‘building on history’” (Christof Bodenbach).

Alongside 21 other outstanding examples of contemporary architecture in Germany and buildings by German architects, Max Dudler’s Hambach project appears in the German Architecture Yearbook 2012/13 as the winner of the DAM prize. The yearbook is published in connection with the awarding of the DAM prize and features Max Dudler’s conversion and extension of Hambach Castle.

Max Dudler appeared in the German Architecture Museum’s Yearbook as early as 2010 for his Jacob- and Wilhelm- Grimm-Centre at the Humboldt University, Berlin. Containing 216 pages, the comprehensive DAM Yearbook 2012/13 is published by Prestel-Verlag in both German and English editions. It contains a forward by the editors Peter Cachola Schmal and Christina Gräwe as well as two essays: by Bernhard Schulz on the conservative tendencies within contemporary architecture and another by Stefan Klos on “white elephants”, the problematic legacy of large sports buildings. The publication is available in bookshops and as a museum edition in DAM. Members of the Friends of DAM Society are eligible to receive a complementary copy of the yearbook at the museum counter.

Max Dudler has been nominated for the European Union Prize for Contemporary Architecture – Mies van der Rohe Award 2013 for both his Hambach Castle project and his visitor’s centre at Heidelberg Castle.