Impromptu matches between artists and architects from different generations who share a passion for drawing have been held for five years by A.A.M. Architettura Arte Moderna. Each match provides a drawing that comes from the two-player contest on the same sheet. “Duets/Duels.Draughts matches on drawing” this is the title of the distinctly innovative project established in 2008 from an idea of Francesco Moschini and Francesco Maggiore.

In each duet you can see the authors' attempt to communicate through images from their own cultural or formal repertories and in many cases it represents a language of recognizable signs.

The initiative, which has so far generated a corpus of twenty precious and unpublished works, envisages a series of matches between emerging architects, painters and sculptors and those of international renown.

The aim is to induct to a reflection, almost anachronistic, on the extemporary construction of the forms and on their beauty born in design.

Currently he is a collaborator of Prof. Arch. Francesco Moschini for the teaching of Architectural History and Contemporary Art History at the Politecnico di Bari.

He collaborates with Francesco Moschini's Foundation, with Gianfranco Dioguardi's Foundation, and with A.A.M. Architettura Arte Moderna, which invited him to participate in the project “Duets/Duels.Draughts matches on drawing”.

He won the Premio Giovani Architetti 2009 promoted by Accademia Nazionale di San Luca. The same year he participated in the exhibition “Architettura incisa” organised by Istituto Nazionale per la Grafica. 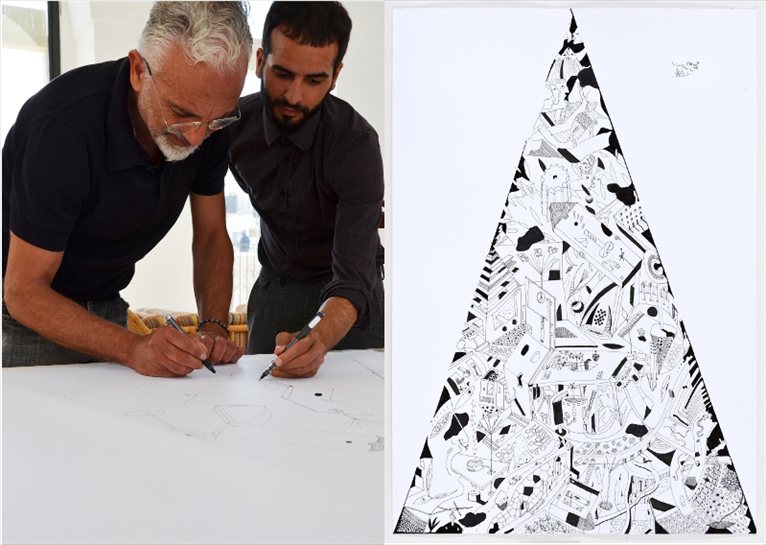 He collaborated in seminars, lessons, cinema events and exhibitions.

His works are in the collection of Maxxi, the National Academy of San Luca, the National Institute for Graphics, the AAM Architecture Modern Art.

He works as architect and designer. He is the author of reports and articles dedicated mainly to art, photography, and he is editor of "Quaderni di Varia Cultura" promoted by Dioguardi's founation with Eng. Francesco Maggiore.

He also made pictures and illustrations for books, newspapers and posters.

A rich repertoire which has allowed A.A.M. Architettura Arte Moderna to establish a series dedicated exclusively to “Duets/Duels.Draughts matches on drawing” within its collection of drawings.