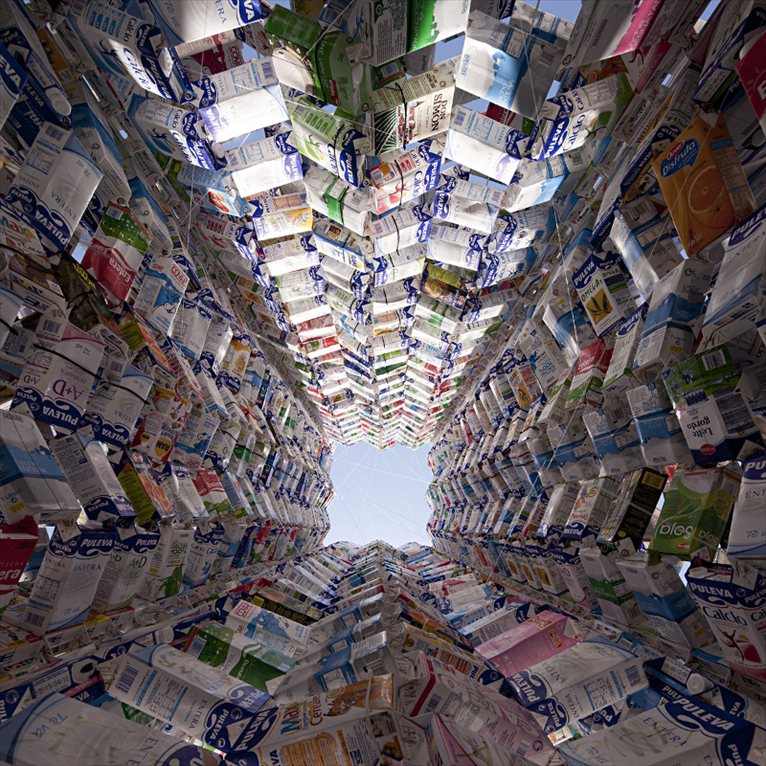 The Briks Pavilion created by Cuac Arquitectura with Sugarplatform was intended to sell off "The biggest construction made with bricks" as a consequence of the Worldwide day of recycling as part of a series of national and international events to raise someone's consciousness of the importance of the treatment of the destroyed and the garbage produced by the human being in relation to the protection of the eco system. 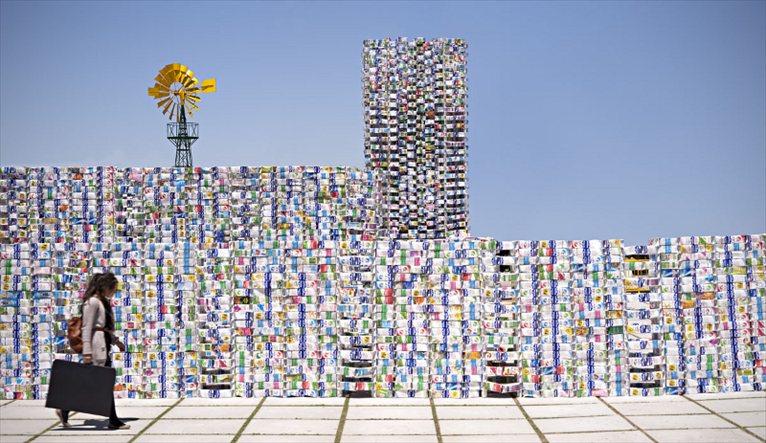 The project starts up in the used cardboard of milk. An intense informative display at several high schools of the city of Granada we got close to 45,000 containers for the realization of the pavilion, space constructed exclusively with this element. 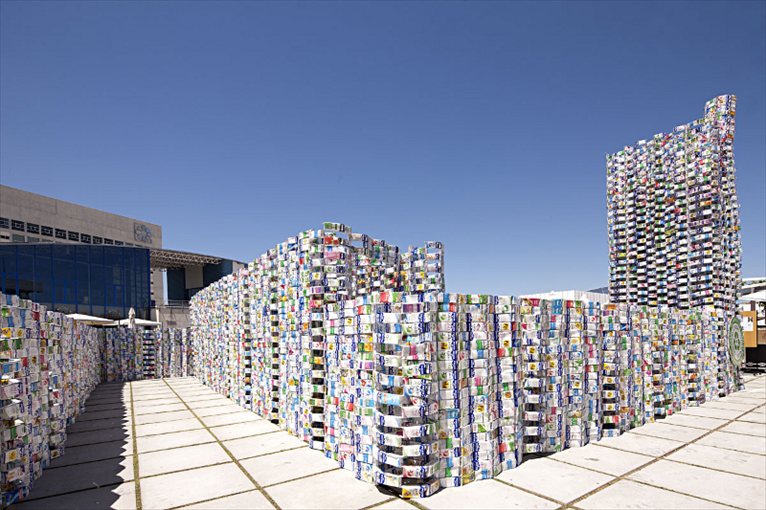 A new constructive system starts in the briks's joints , made with simple and resistant material which do not impede the later recycling of the pavilion : The staples and bridles would enable to holding the one-piece eyelashes with the other one forming angles of 135.

The system would give priority to minimize the number of necessary type elements with the bigger possible versatility. They created 2 units of self-supporting modules t: The wall, as the piece bases solid with its window variant (to give transparency and to leave to pass light )and the tower, like piece nucleus that joins two pieces host lineally or in the perpendicular.

It has definitively to do with a Milk Kit  that, like pieces of a LEGO, and enable the bigger facility of put-up in the record time of 2 weeks. 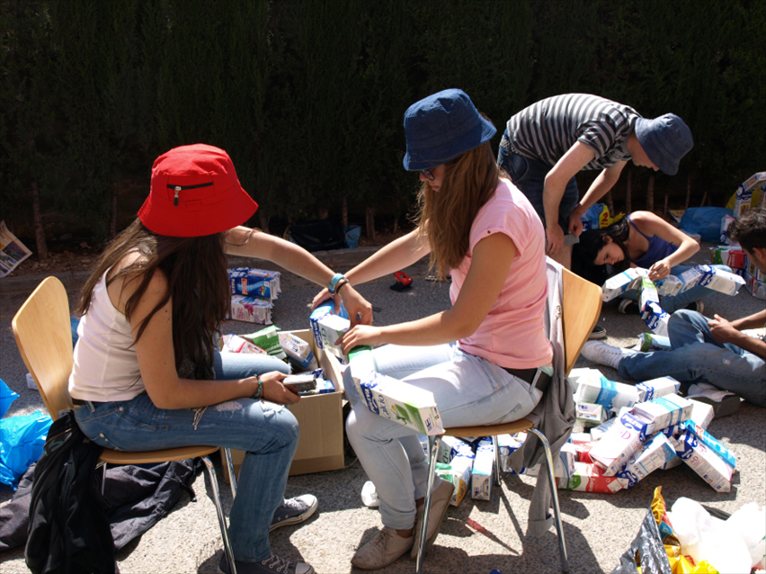 The School of architecture of Granada would take over, thanks to 120 students from the 1st YEAR, of the construction in several phases. 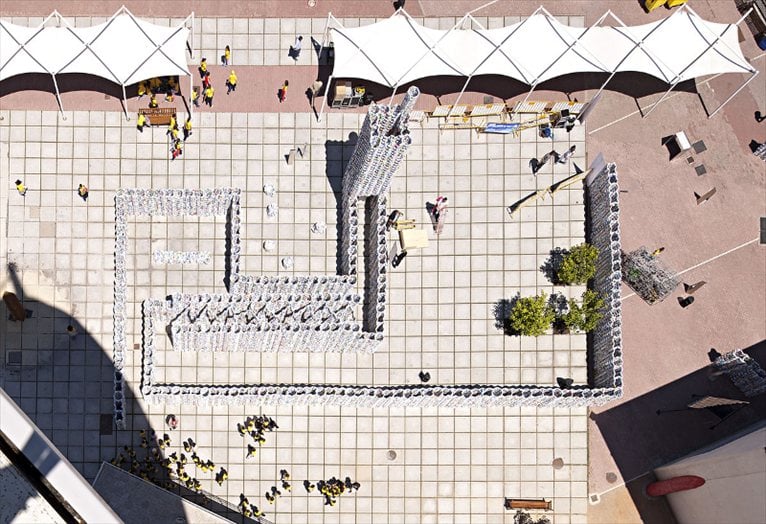 The first stage, which takes 15 days, consisted in the pre-put-up of elements at the school for a later transportation to the event's place where it would proceed to the definite putting together. 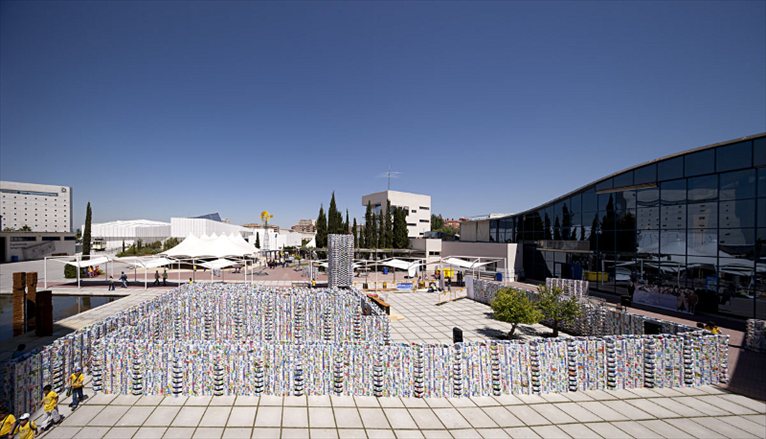 From very simple construction instructions, each student group had to manufacture 3 piece (one of each kind). In that way it was gotten in a week to gather at the architectural school the 300 modules that were assembled for the manufacturing of the pavilion. 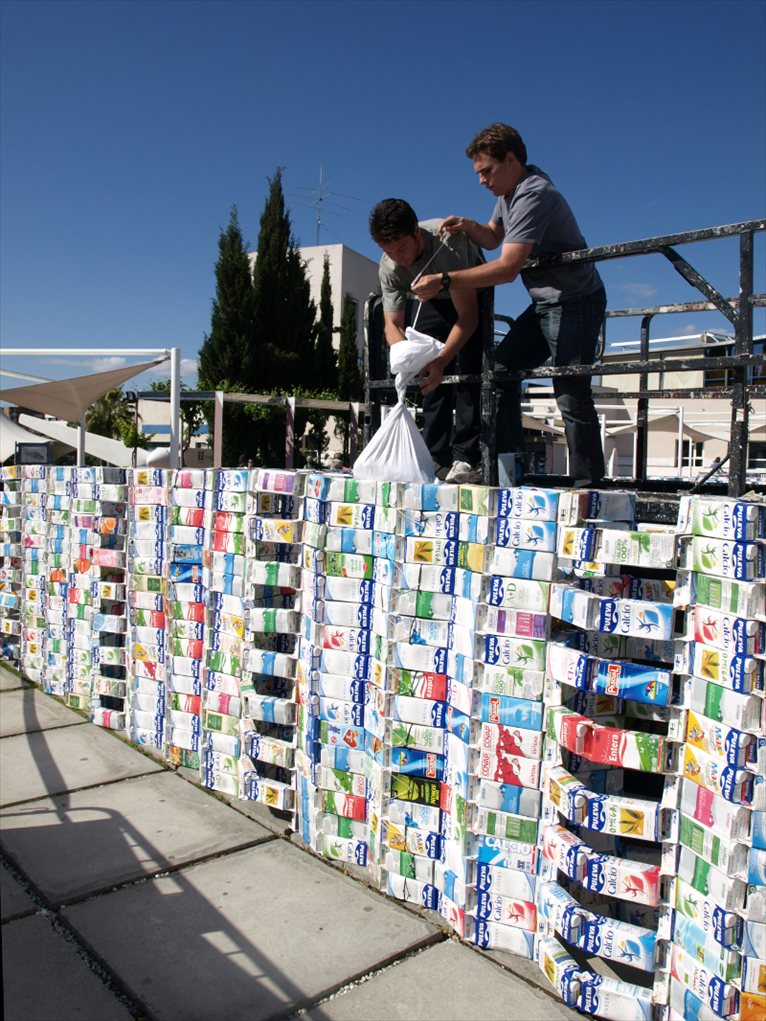 In a second phase, during 3 days , already in the Park of Sciences where the event took place, the pieces stuck imbedding them some in other ones, and shoring up the walls with bags of sand in his base creating a counter-weight against the wind and the possible pushes.

Like a lobby to the inferior access of the Park tower lookout, the pavilion is developed as a some kind of labyrinth creating a variety of internal spaces: Patios of several sizes that collect the existent woodland, different passages with varied heights sometimes covered with beams in the shape of branches of Tetrabriks and a tower of 7m that gathered light and shades through his walls of window blind.