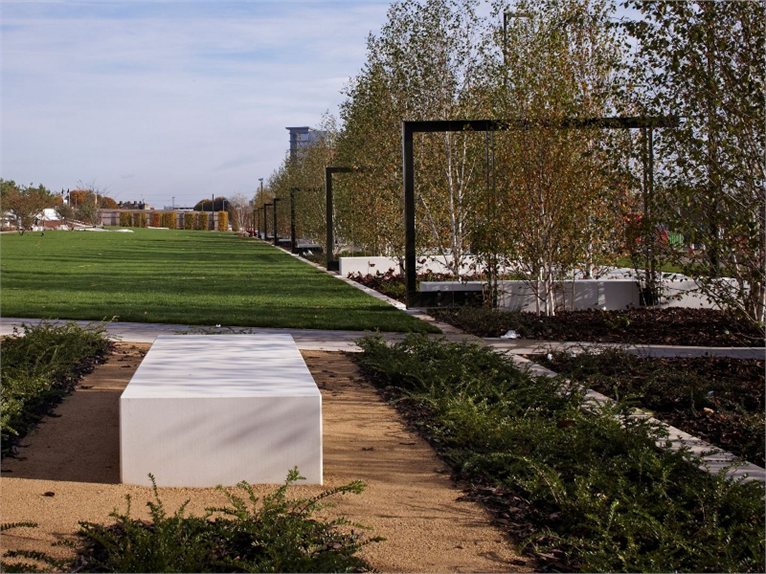 Patel Taylor architects recently completed work on Eastside City Park: the first totally new park in Birmingham for over a century. The London firm, who successfully emerged from two stages of an international competition as the winners of the commission, had no intention of letting this extraordinary opportunity to revolutionize the heart of the second largest city in England slip away from them.

The Eastside district of Birmingham, crossed by the new park, is currently undergoing major redevelopment works. The overall cost, when completed, will be about 8 billion pounds in ten years and will create 12,000 jobs (8,000 of which during the construction period). This great project is part of an even broader renewal plan called Big City Plan.

The design of this important piece follows in the same rational and geometrical vein of the neighbourhood. A sequence of defined spaces frame fragments of nature and parts of the city in a rational and very pleasant path. It could be said that in this case the English style garden seeks a blend with the control of the typical nature of Italian style gardens.

The density of this stratification changes (as the meaning changes) depending on whether you pass through the park lengthways or crossways. Walking through the park lengthways we are presented with a continuous narrative, while in the shorter dimension the effect is one of a pleasant and unexpected green break. In both cases, the areas of the park offer a pleasant variety of topographical, historical and formal connections with the city.