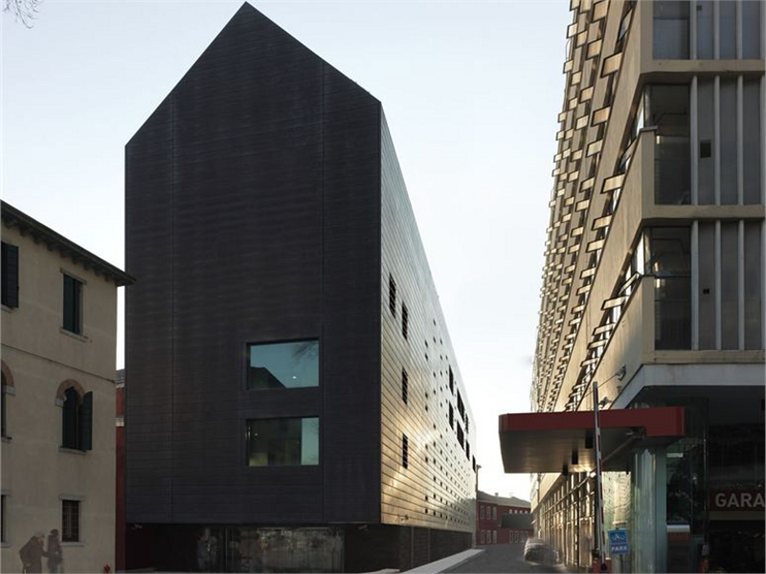 It was officially opened last July and has already won the Gold Medal to Italian Architecture for Public Customers. It is the new LCV. Law Court Offices in Venice designed by Italian architects C+S Architects - Carlo Cappai and Maria Alessandra Segantini.

The project, which won an international design competition in 2002, provided an opportunity to return an inaccessible area to the city. The complex of the former tobacco factory in Piazzale Rome will become the new courthouse in Venice, combining all judicial offices, which are currently located in several historical buildings.

“The project process was complex, as is usual for large public works in Italy” say the designers. “Without wishing to enter into details of the long bureaucratic and administrative process lasting the ten years in which the work was carried out, the building that we present is the first to be completed. It is a blade that is grafted in the only gap existing in the project area overlooking Piazzale Roma. It is the large entrance hall needed to distribute the flows that regenerate an important part of the city of Venice. At the same time, it is the infrastructure that allows the system of existing buildings to be regenerated”.

The first issue that we worked on is the manipulation of the program offering the hybridization of a public building that was at the same time an infrastructure.

Indeed, two floors of the building house all the technological systems (central heating and cooling) that will allow the reuse of the entire system of the Tobacco Factory. The volume also hosts (upper floors) offices of the surveillance court, registries and archives.

The large entrance hall, open to the city during the day, will host commercial spaces (tobacconists, bars, shops) stimulating the system of public spaces (interior courts and small squares) restored to the urban fabric of Venice.

The second theme of the project regards the scale of the work and the system type. The size of the building compares to the urban scale both with the great void of Piazzale Roma, being located on the opposite side to the bridge of Calatrava, and with the generous size of the void of nineteenth-century buildings of the former tobacco factory, large volumes of spatial suggestion, mainly characterized by a Zenith lighting system.

The new volume has a simple and compact form, typologically it is a contemporary tesa manipulated in height to connect the skyline of the volumes of multi-storey car parks to the urban system of the nineteenth-century industrial tesa.

Towards Piazzale Roma, the volume does not rest on the ground.

A five metre long cantilever on Piazzale Roma becomes the entrance: a shadow that welcomes the flows, redirecting them into the new system: a compression exploding within a space of seven floors lit from above, over which there is a metal ladder, which leads to all floors of the building that draws the front to the San Marco garage with a sequence of small openings, like a string of coded characters that dot the façade.

The third theme of our work involves the material. The material we use for the external cladding is TECU pre-oxidised copper: in Venice copper is the material that characterizes the roofs of monumental buildings. In this project, the material becomes a metaphor representing the institution, the 'court of justice' and that welcomes people in a bright and transparent area like a large manipulated and extruded roof. The process of pre-oxidation of copper evokes the way in which time acts on the surfaces with a process of subtraction of material. Material, in addition to the program and the system typology, is manipulated to immediately introduce the building in the Venetian time which it belongs to. In spite of its generous dimensions, the building looks almost like its shadow, a tesa between history and modernity.