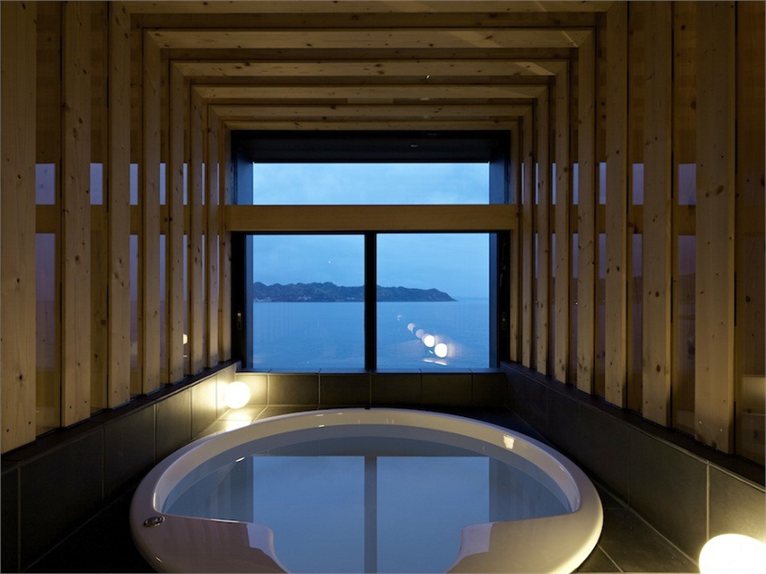 Takeshi Hirobe's architectural office was called upon to design a house overlooking Tokyo Bay, Villa SSK in Chiba, just a few kilometres from the Japanese megalopolis, but in a surprisingly intact natural setting.

The designers were particularly impressed by the ocean and the verticality of the coast that rises towards the rocky mountain that frames the landscape. The building is designed like a “bridge” between the dark and jagged profile of the mountains and the imposing expanse of the ocean.

“Architecture ought to be rooted in the place it occupies.” “The architectural form of this building somehow emerged during the long process of analyzing and studying the location” explain the architects.

“Although – continue the architects – the design process was supposed to have entailed a frantic accumulation of decision-making and choosing between possible options, the finished building gives one the strange, lingering impression of it having been constructed according to some law or other.”

The new building does not look anything like the nearby buildings, starting from its colour. Another alienating element is that this “tunnel towards the landscape” has virtually no right angles between the walls, the floors and the roof.

The functional program includes spacious living, dining and kitchen areas, a bathroom (in which the bath probably has the best view from the house) and a guest room. In addition, there is also a special room that the owner requested so that he can see his beloved car (we do not know what car it is, so you are free to imagine what it might be: I imagine the 1950's Ford “Grease Lightening” from the film “Grease”, because of its sharp rear edges).