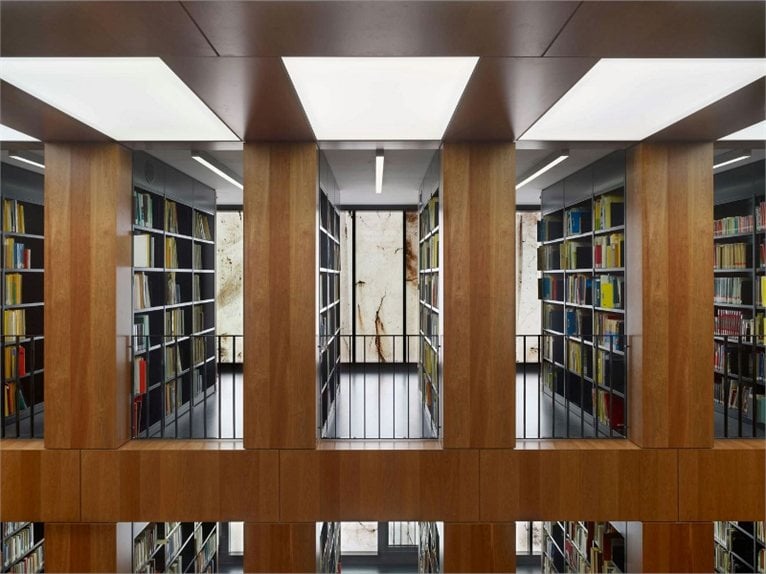 The main building of the Folkwang University, the academy of music and arts in the North Rhine-Westphalia region, was built inside the old Benedictine monastery of St. Ludgerus in Essen-Werden, which was used as a prison, in 1811, with the French occupation. During the 18th century, the complex had been transformed into a princely baroque residence, arranged around a magnificent courtyard, the “Cour d'honneur”. The new Folkwang University Library by Max Dudler, who won the competition in 2006, is positioned on the south side of the court, in place of a 19th century Prussian military hospital demolished in 1969.

The new construction encloses the south side of the courtyard with an imposing crystalline structure, whose texture is meant to give an idea of the façade of the old French prison. Dudler conceived the building on the basic idea of a 'museum showcase', but at the same time designed a monumental building with a monolithic volume.

The design of the façade has been produced in collaboration with photographer Stefan Müller: each individual panel, which comprises the cladding, reproduces the illusion of being in front of a stone material, thanks to the use of a particular photographic technique applied to glass.

In this way the shadows of those who are behind the façade can be seen and the natural light filters inside the library. At night, on the other hand, the outside of the building overlooking the courtyard also lights up.

The glass façade is fixed to the supporting structure of the building made of reinforced concrete by means of a system of uprights. The size and position of the concrete columns depends on the proportions of the internal shelving for the volumes kept in the library.

These pillars are clad with the same cherry wood as that used for shelves and furniture, but not all were designed as bearing elements: inside the cavities of some of these, there are the pipes of air-conditioning systems.