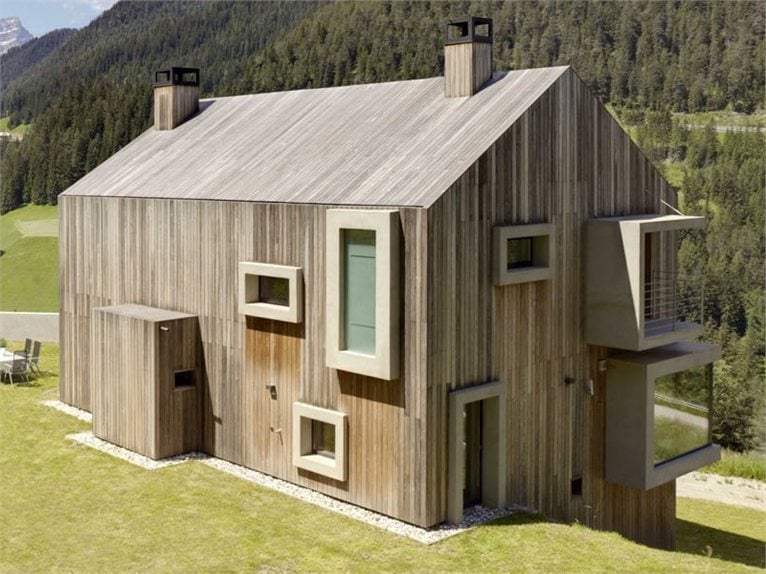 Casa Prè de Sura, designed by casati - hub for architecture and research from Innsbruck Austria, is an original remake of the traditional wooden chalets that are dotted over Val Badia. The elementary volumes are almost entirely covered in heat treated ash strips and are interrupted only by the irregular windows dotting the façades (and part of the roof).

The windows are sometimes so large and deep as to be “liveable” you can sit or lie on them enjoying the view. Other times they are very thin and at floor level, so as to appear mysterious unless you change perspective. These are the windows dedicated to the younger inhabitants of the house, who can find a relationship “to measure” with the green or snow covered meadows surrounding the house.

What seems like a quirk, a concession to trendiness, is, in reality, the main element of the building and of its relation with the landscape. By directing attention, guiding the eyes of whoever is lying in bed or crawling on the floor, the house opens up to the landscape according to a tradition that originates as far back as the Italian Renaissance.

The construction rests (unfortunately) on reinforced concrete foundations, although its structure is almost entirely wooden with the exception of a central wall, which has no structural function and which is made of “rammed earth”. This wall is made up of layers of earth in a traditional technique rediscovered and brought back into vogue, especially thanks to the work of Martin Rauch, the Austrian builder who is guru of this technique which is also a philosophy of life.

Apart from having the characteristic naturally pleasing striated effect, the wall is also a regulator of moisture in the house, absorbing it when it is excessive and releasing it when needed. Its materiality and weight create a pleasant contrast with minimal and geometrical precision of the rest of the structure, opening like an “inner window” onto another kind of nature to be experienced.