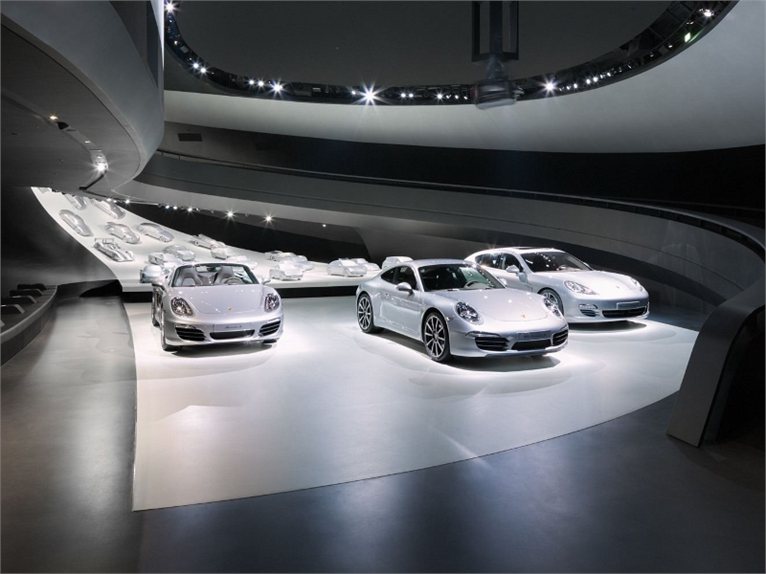 A few weeks ago, the office of Henn Architekten celebrated the opening of the Porsche Pavilion in the so-called Autostadt in Wolfsburg, home to Volkswagen group cars. For the first time since its opening in 2000, the park has opened a new structure that expresses the importance of the most renowned German car manufacturer, Porsche, within the Volkswagen group.

The pavilion looks like a modern covered amphitheatre whose steps gently go down towards the water of an artificial lake which in turn reflects the sleek shape of the roof. This is made of dull white steel with aerospace technology and juts out towards the lake for twenty-five meters, surrounding the amphitheatre as a protective valve and also contributes acoustically. The fluid and dynamic exterior style is also found in the interior, smaller of course but with a precious balance (as well as in the collection of brand new sports cars).

Henn Architekten, German design studio based in Munich but with branches in Beijing and Shanghai, has a true specialisation for architecture related to the automotive world. As mentioned, the Porsche Pavilion is the latest addition to a theme park designed by the same Henn Architekten office at the end of the 1990's, initially dedicated only to Volkswagen, having found a home on the site of an old abandoned manufacturing facility.

The new facility is located opposite the Volkswagen pavilion, right across from the central axis of the park, and symbolizes the common destiny of the two car makers, together since birth. Indeed, not everyone knows that the first Beetle was designed by Ferdinand Porsche, founder of the car brand, after an incredible life marked sadly by Nazism.