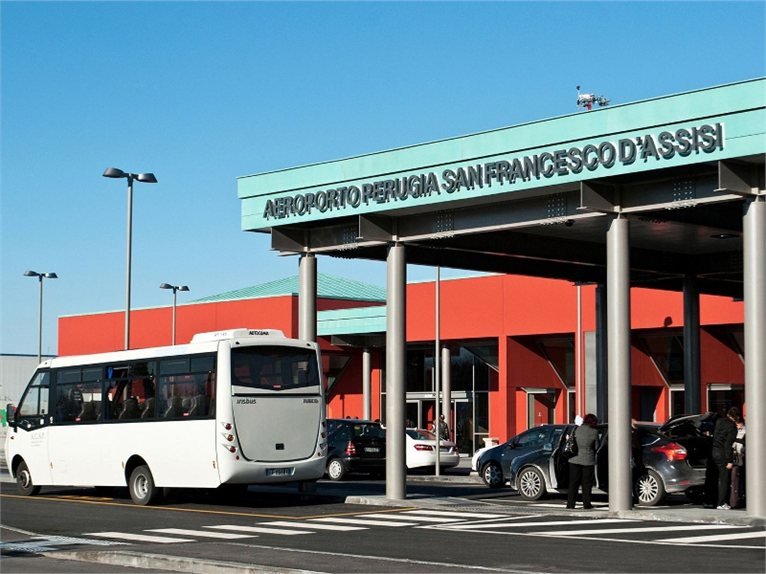 Just ten days after the death of the 'lady of architecture' Gae Aulenti, the New Airport of S. Francesco d'Assisi, in Umbria has been officially inaugurated. The structure is located within an area of high historical and landscape value as it is between the cities of Assisi and Perugia.

Eight halls made of reinforced concrete with a rectangular plan, a pitched copper roof tending towards green, occupying an area of 4,700 square meters, incorporating the structure of the old terminal. The new internal layout envisages waiting rooms, a café, a restaurant, a conference hall, an exhibition hall and arrivals and departures areas. A central shopping mall develops over two parallel rows, with an independent rear office area.

The Gae Aulenti Architetti Associati project also envisaged the external organization of the green areas, the expansion of parking areas, areas for setting down and picking up passengers and the layout of the runway connections. The recently constructed Fire Department building, an airport services building and a customs access.

The new airport has actually been operating for a few months and has made it possible to increase the number of destinations thanks to the addition of cities including London, Brussels, Milan, Bergamo, Barcelona, Palma, Ibiza, Olbia, Cagliari, Trapani, Tirana, Rhodes, Crete and Sharm El Sheikh.

During the inauguration Catiuscia Marini, President of Regione Umbria local government, expressed her satisfaction for the opening of a work of “extraordinary strategic interest for Umbria, but also for the national air transportation system, with a key role of encouraging the development of both tourism and of the general economy of our local area.”

At the same time, Marini reserved an affectionate farewell to Gae, who passed away during the night between October 31st and November 1st: “Gae Aulenti was a great friend of Umbria, a land that she deeply loved and knew well and has created and designed this structure, demonstrating a rare ability of knowing how to respect the environment and the landscape in which an infrastructural work must be installed. A task that, in the case of this airport, inserted into the impressive scenery of the Assisi plain, was even more difficult and complex.”