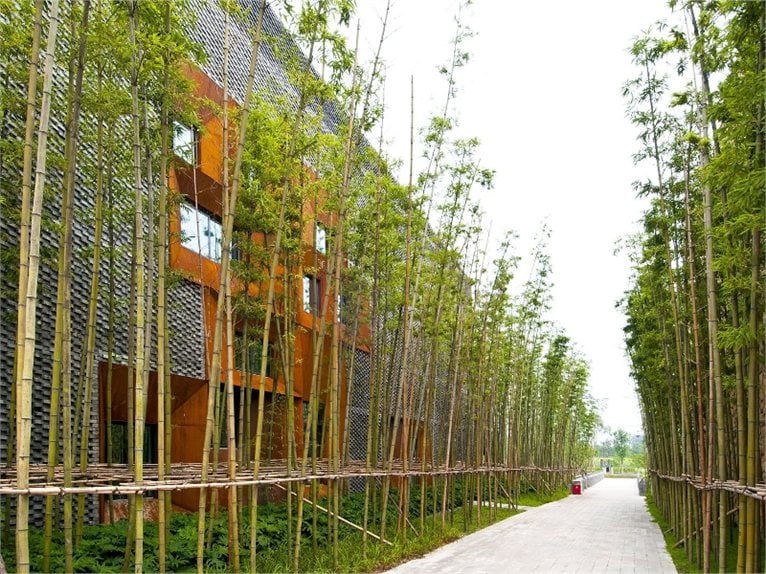 The project layout, based on the traditional Chinese courtyard house, creates a series of exhibition galleries inside a single building. The structure, divided into several rooms of varying sizes 'wrapped' around seven courtyards, creates a series of open spaces within the deep floor plan.

Spatially, the aggregation of courtyards inside the larger building complex becomes a network of spaces connected to one another by multiple routes. The sequence through these 'precincts' creates a series of spaces at multiple levels in which you can look through the courtyards, from inside to outside and vice versa.

The centre of each courtyard maintains a rectilinear geometry, while the perimeter of the building has irregular edges. The geometry of the roof is highly variable and is composed of a series of sloping roofs that create alternating “peaks” and “valleys”.

Various passive energy strategies have been developed as an integral part of the design. The concrete and brick walls create a significant thermal mass to regulate the temperature changes during the day. The configuration of the spaces around the courtyards provides an important contribution of natural light, thus reducing the need for artificial lighting during many hours of the day. The strategies for natural lighting and passive cooling inherited from the traditional courtyard house are reworked in this contemporary context.

The perimeter walls of the structure vary in height from 11 to 15 meters and consist of grey bricks produced locally on which Corten steel fixtures have been put. The brickwork emphasizes the tectonics of the brick as a construction module and the oblique geometries of the building. All the bricks are pointing in the same direction, what varies is the angle of the perimeter walls. This difference creates a texture oriented so that the east and west façades are smooth and the others have a 'jagged' look.

The use of local materials and construction techniques to create a simple but culturally important project, has created the overall result of an exhibition hall that fits into the building context of Chengdu, drawing from the assets and providing a unique and contemporary, flexible and sustainable space for international exhibitions.