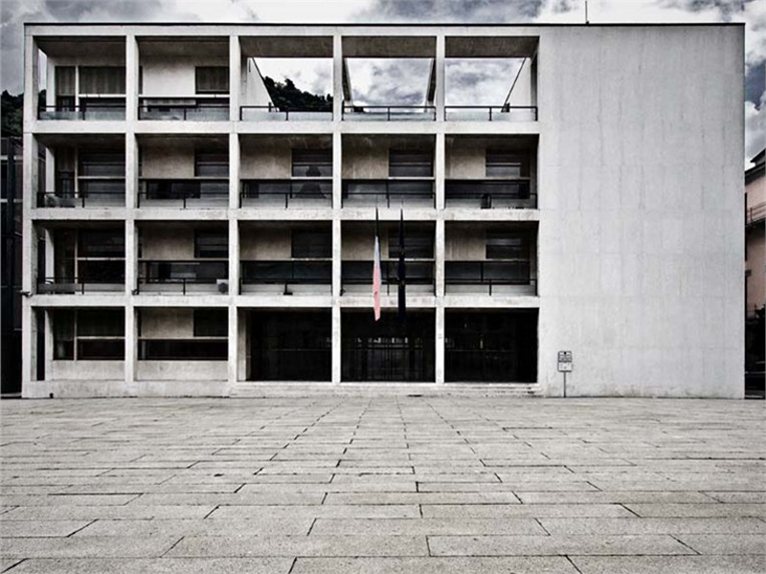 Photo note: The artist, Alfredo Jaar, in a 2006 interview, regarded Terragni’s Casa del Fascio as the “perfect memorial to Gramsci.” Jaar used the building’s blank right facade (originally left uninterrupted for propaganda) as a canvas for projecting a sequence of images about Gramsci. As Jaar noted: “Here, the fascist building is transformed into Gramsci’s grave. My trip is thus complete, the circle closed, and Gramsci’s indomitable faith in humanism and the hegemony of intellect is still alive. People were, I think, touched and empowered by my concept of transformation of the former headquarters of Fascism in Como into a commemoration and celebration of Gramsci. It was hopefully a true manifestation of everlasting resistance to tyranny and death.”

The Indicator is back!

In reading Gramsci’s Prison Notebooks I am struck by his lack of irony and pretense. It is not a resistance to humor per se. It is a restraint. A will to power that puts everything in the urgent light of sincerity.

True. He was writing from prison. But it’s more than that. He was writing what he believed. There is no escape valve of irony in his text. He was, and is when you read him now, in your face, holding you and daring you to veer away. What he is writing is not to be taken with a wink. He commands humor in his language but the humor drives a sustained sincerity, a concern for humanity—including his own humanity.

Perhaps he is simply resonating a style more common to the early twentieth century. Or, perhaps we read this as resonance under present pressures. Or perhaps, because of our context, it is signaling a need for a return to more sincere, honest modes of writing. The New Sincerity.

Maybe it is time to turn away from irony, cynicism, and the flamboyant affect of comedy—what so much blogging has become.

Irony is for better times, when a certain playfulness can override what is truly at stake for humanity. I think the most recent death of irony in the west was 9/11. That certainly killed it for architecture, anyway. That and putting an architectural lens on the so-called developing world.

Beyond a privileged celebration of it from afar, there is nothing ironic about spatial, material, and economic upheaval. In this sense, postmodernism, as the narrative frame of irony, was dead before it even got off the ground. Reality is simply too wild an animal to tame.

There is simply no cultural air left for the pervasive self-referencing, ironic mood of architectural discourse. The blogosphere is suffocating. How can we breathe again? Or, in terms of intellectuals like Gramsci, it is a choice. How do you write what you believe in? How do you put yourself in prison and how do you get out?

There is no room for irony in architecture anymore. The stakes are too high. Massive spatial and economic implications, good and bad, have rendered it impossible to use the cloaking device of mere style to hide the implications of what we do. We are beyond styles. Architecture affects too many people, including its practitioners, to be joked about or taken lightly.

This is not to say writing cannot challenge or be dangerous to architecture. But it must not fall into the trap of irrelevance. Irony and writing for entertainment value are such traps. These modes lost their significance with the proliferation of architecture blogs of every stripe, the carrying forth of so many voices that now produces a wall of static.

Blogging about architecture can encourage a reckless building up of each and every thought, lending such significance to every idea that the weight of the discourse becomes an impenetrable mass.

Blogging is what happens when there are no editors, internal or otherwise. What we must strive for is writing. And in this we may again find ways to discuss architecture.

Perhaps this happens only when the audience (though I am aware of you now) is suspended in silence, the machines (though I am on my laptop), rendered simple writing machines. We turn inward and rely on the tools of the intellectual, which includes solitude.

This is not to say we cannot laugh at ourselves or our profession (there is much to laugh about if we can maintain a sense of humor). But the writing of architecture must hold architecture as a subject of significant cultural import that contains within it the balance of our own existence. This entails, of necessity, a measure of sincerity, or writing what we truly believe in without the self-reflexive need for a wink or slapstick.

After all, when we write about architecture we are writing about ourselves. It clarifies who we are. You are reading us and the architecture within us. This goes well beyond mere “social media”.

This is media and mediation. Without which the architecture, though not diminished, is less than it could be. We architectural writers bear a heavy responsibility to the subjects we write about and to ourselves.

To write with sincerity about architecture means to implicate it in our current epoch of trouble and opportunity. As well as to implicate it into our own lives. This requires a suspension of easy, pseudo-intellectual irony, and a resistance to any false artifice of humor.