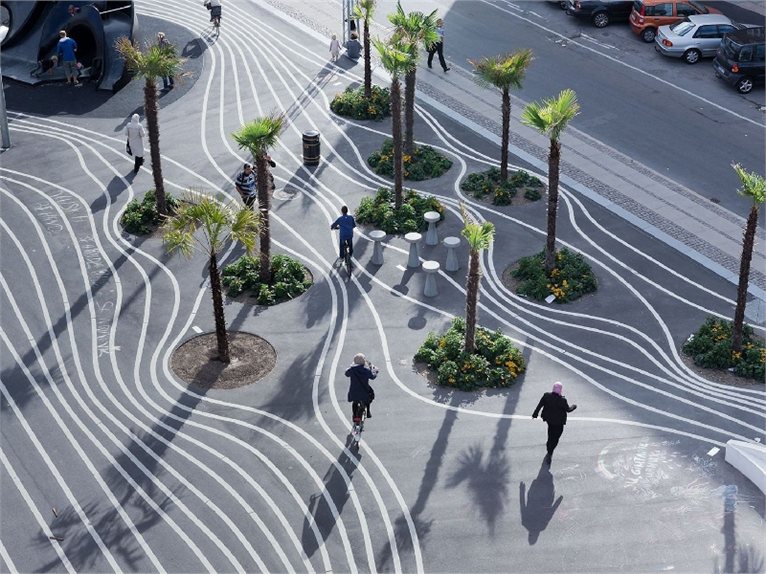 Superkilen is an urban park of 30,000 square meters in Nørrebro, the most multi-ethnic neighbourhood of Copenhagen, the result of collaboration between the architects of BIG - Bjarke Ingels Group, the landscape architects of TOPOTEK1 and visual artists Superflex.

The designers have responded to the request of the municipality of Copenhagen to create a city park that favours integration by inviting the residents to participate in the project. However, far from a condescending populist attitude or from believing themselves “deus ex machina”, the designers descended amongst the inhabitants to listen to the needs and wishes of a “colourful and multi-ethnic” neighbourhood but also to some extent alienated from city life.

The result is an experience that in terms of proportions and unity has few equals in Europe, especially because it does not involve “setting up” a part of the city for an occasion of particular international visibility (Expo or what have you). It is more a “normal” process of redefining functions around the different needs of the inhabitants, or rather around “different” inhabitants.

The unusual design team came up with the idea of moving historical pieces and urban reality from all over the world into the new park: each of the 57 ethnic communities of Nørrebro had to be represented in the park by at least one object. Through the newspapers, radio, the Internet ... residents were asked to suggest functions and items of street furniture for the future Superkilen.

The result? An octopus-slide from Japan, rainbow bike rack from Finland, sidewalk bollards from Ghana, benches with annexed advertising from Brazil... The list of objects installed in the park is long and includes items some way between the kitsch and the provocative but it seems perfectly in line (in fact in some ways over the line) with the theme of this year's Venice Biennale. Has work started on building the Common Ground?