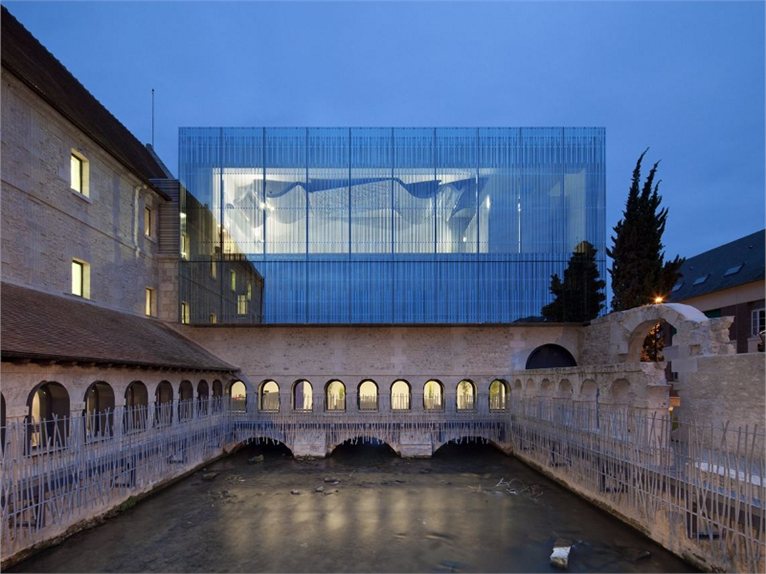 Opus 5 architecture office with their École de Musique Maurice Duruflé offer us two journeys, opposing yet not incompatible, one into the past and the other into the future.

The ancient convent of the Penitents, in the city centre of Louviers in Normandy, is an outstanding example of "cloister on the water", consisting of a complex set of layered constructions. The intent was to convert it into a functional but at the same time "attractive" new school of music, capable of exploiting its unique historical backdrop without sacrificing the modern requirements of space and equipment.

The project has, however, raised considerable controversy, even in a country traditionally open to change (and revolutions). The programme of work was, on admission of the architects themselves, “heavy” and implied considerable changes, both to the building and to the reconstruction of damaged parts which predominate over existing ones.

The result is a compact design where the new parts dominate the ancient elements, although it is still the historic building that governs the system and suggests the solutions. For example, the South wing houses the main element of the program, a crystal casket containing the concert hall, appearing over the remains of its walls but "linking it" to a complex play of mirrors.

The historical parts are reflected in its walls and then find the illusion of a continuity that had been lost for centuries. At the same time the façade makes up the building with the natural elements, reflecting their surroundings and the ever changing sky.