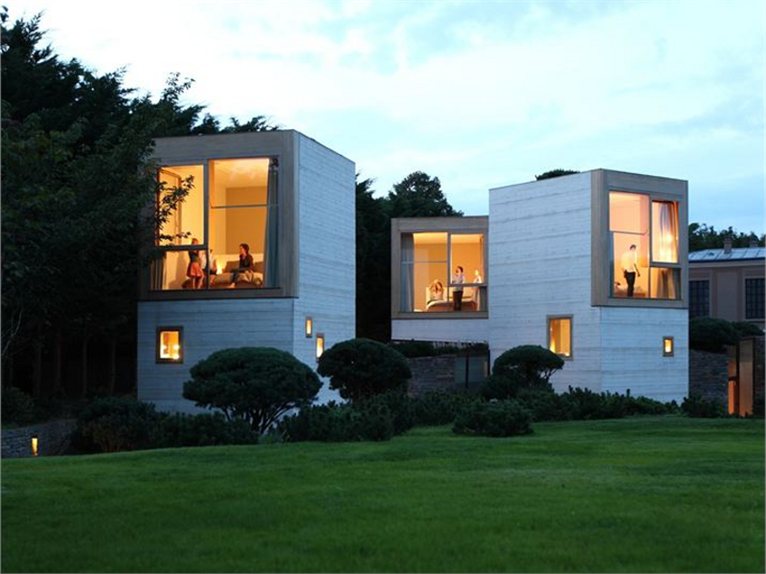 The extension of an orangery in Yvelines, less than half an hour by car from the centre of Paris, became an opportunity for Christian Pottgiesser's architectural office to break down the concept of single-family house and reassemble it according to an original and stratified scheme: this is Maison L.

The house was designed for a couple and their four children and consists of five towers made of fairfaced reinforced concrete that rise from a lower base. Each volume has a dedicated sleeping area, arranged on three levels: dressing room on the ground floor, bathroom on the first and bedroom on the top. The space is deliberately minimal, around 8-10 m2 per floor, only the owners' tower is slightly bigger and has a roof garden.

The ground floor is very large. This common area connects the individual elements in a fluid manner, in contrast with the rigid geometry of the towers, and its curved walls have an external cladding of dry stone. The appearance of the intervention as a whole resembles a small Mediterranean village, for the layering of elements, the massive volumes and for its merging with nature that seems about to (re)conquer the small village.

Considering the quality of the composition, important comparisons can be ventured, the first is to Louis Kahn who, after his stay in Rome, began to devote himself to what he called "inhabited ruins." As in the work of Kahn, the use of "rough" and scanty materials is warmed by closing elements, the doors and windows that reveal "civilization" in their warm tone, their being not only inhabited, but also comfortable.

The second comparison is with the work of Carlo Scarpa. In place of the alleged ineffability of Scarpa's works or worse still philological and a little pedantic imitations of them, it may also be useful to point out the Scarpa-like elements in the work of an architect who maybe knows very little about the Venetian master. We do not find here the meticulous research of detail but the slip of the walls in order to create alignment and openings "significant" and will mark the passages, such as " breaking " a scale, so that it could not be mechanically and without cover think about it.