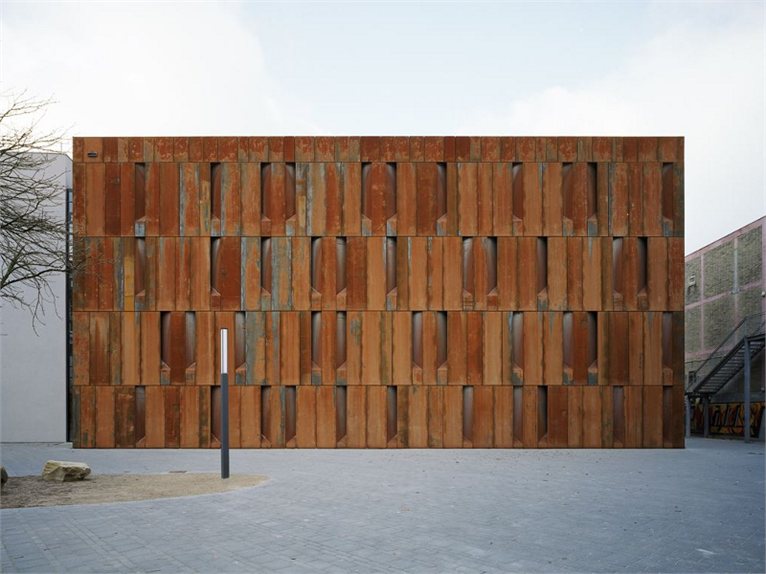 German architects Scheidt Kasprusch Architekten were the winners of the 2005 contest organised by the municipality of Essen to reorganise the city's historical memory within a historical building in the centre, which had never been completely reconstructed after being bombarded during the second world war.

The Haus der Essener Geschichte (the house of the History of Essen) was called upon to contain the documents of the city's archive with the relevant administration, the library, an auditorium and a museum entirely dedicated to its recent history.

The primary need was to completely recover the Luisenschule, a true monument of the city's history built in 1906 and later expanded after the war but, as mentioned, never fully reconstructed after the bombings. The new functions could have been well integrated into the original structure, however, to make room, a new archive to house up to 17 km of rack was required.

The new building closes the urban side of the original structure and is connected with the 1950's extension by a glass walkway. The façades of the new archives are covered with Corten steel, a reference to the history of the Essen steelworks. But this is not the main reason that led the designers to choose this material: Corten continuously changes appearance and seems to blend well with the passing of time, communicating a certain sense of continuity at the same time.

The structure of the openings playfully reflects the flexible furniture used by the racks inside. Such high and inclined ventilation openings contribute to reducing the direct sunlight and to support the circulation of the air due to their different positions. No mechanical conditioning system is, therefore, necessary.