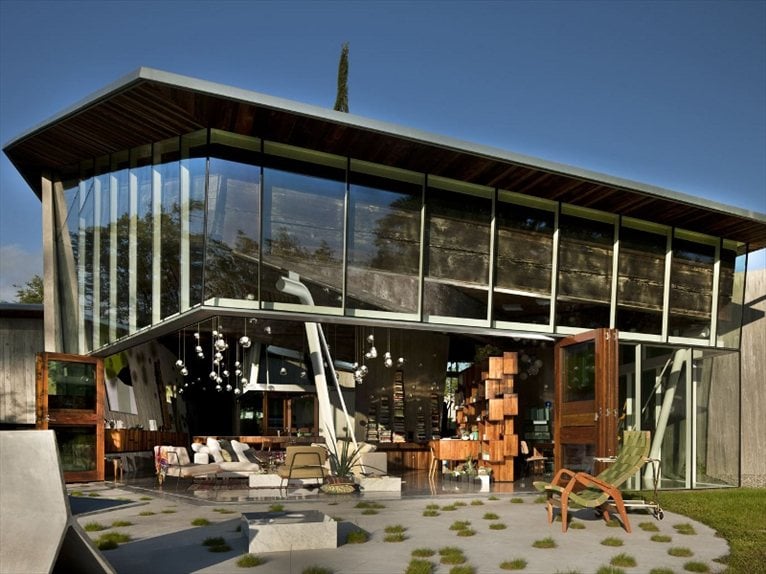 23.2 House, designed by renowned Canadian designer Omer Arbel, is a single family house built on a gentle slope in the Vancouver countryside. The house is located between two old forests which provide two 'open-air rooms', each with its own 'ecology' and different lighting conditions, the house is located at the point of 'maximum tension' between these two habitats and creates a kind of transition.

The house project began from the old wooden beams deposit which had been salvaged from a series of burned warehouses, all of different lengths, sections and and some of which of surprising proportions (up to 20 meters in length and 90 cm in depth).

The basic concept involved preserving the beams, designed as "sacred artefacts in their current state", which were used without any kind of manipulation or treatment.

Due to the different dimensions, the architect designed a geometry that could accommodate all types of beams while making the spaces readable and usable. The result is a triangular geometry that allows each inner room correspond to an external one.

A system of steel columns, supporting the wooden structure and located at the rear of the environments, has been used to make the corners, where the wooden beams converge, stand out. Large accordion-type door systems were introduced in these open corners so that the entire façade can completely disappear.

For the interior, Omer Arbel has created a collection of vintage prototypes and limited editions of '60s and '70s Vancouver designers who never became famous, but which formed the embryo of the modern movement in Canada.