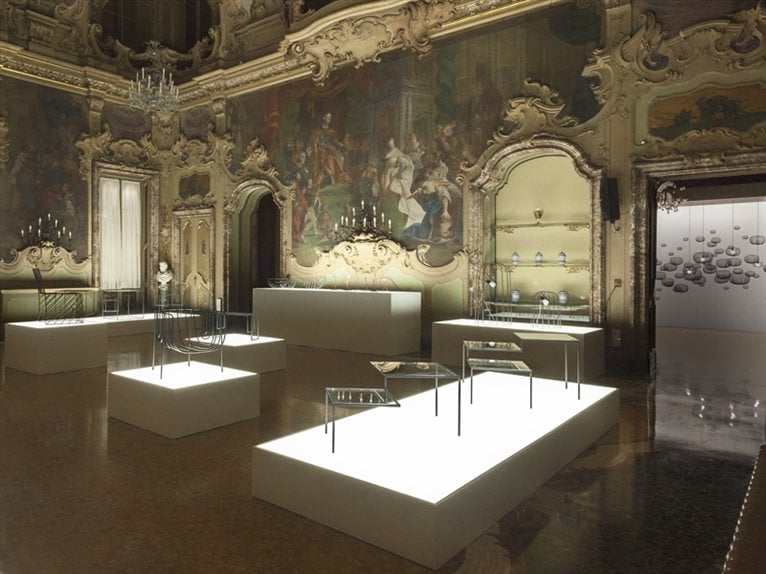 “To live together in the world means essentially that a world of things is between those who have it in common, as a table is located between who sit around it; the world, like every in-between, relates and separates men at the same time.”

The Japanese firm Nendo, led by thirty-four year old Oki Sato, Wallpaper Magazine’s “Designer of the Year 2012,” could not have chosen a better opportunity than Milan Design Week to celebrate its tenth year of activity. Far from any intention of complacent self-congratulation, the solo exhibition “trial & error”, that graced the piano nobile of Palazzo Visconti from 17th to 22nd of April, instead of a sterile exaltation of objects designed by the Tokyo team, assumed the form of a 360° story about the space around them.

This is confirmed by the location choice, the seventeenth-century Palace commissioned by the Spaniard Carlo Bolagnos, not far from Piazza San Babila, whose interiors strongly contrast with the pieces on exhibit. The splendor of the Visconti rooms speaks to the studio’s formal lexicon which is reduced to its essence, the murkiness of the setting is livened up by the brightness of the furniture and the Rococò redundancy of marble and stucco is attenuated by the lightness of the minimal forms. Attention is focused on the empty space that is around the objects, which intertwine with an intricate web of not-only-visual relationships with the surrounding space and the audience, making the atmosphere vibrate. The dynamic linear structures of the products are not just the result of a process of dematerialization which focuses on the essence rather than on appearance, but are above all a praise to agility and encourage visitors to move through the space.  In mounting its retrospective, Nendo never gave up on the ever difficult challenge of communicating the intangible: by stimulating the emotional interpretation of the public, they investigate the margin of inter-Action of the design. 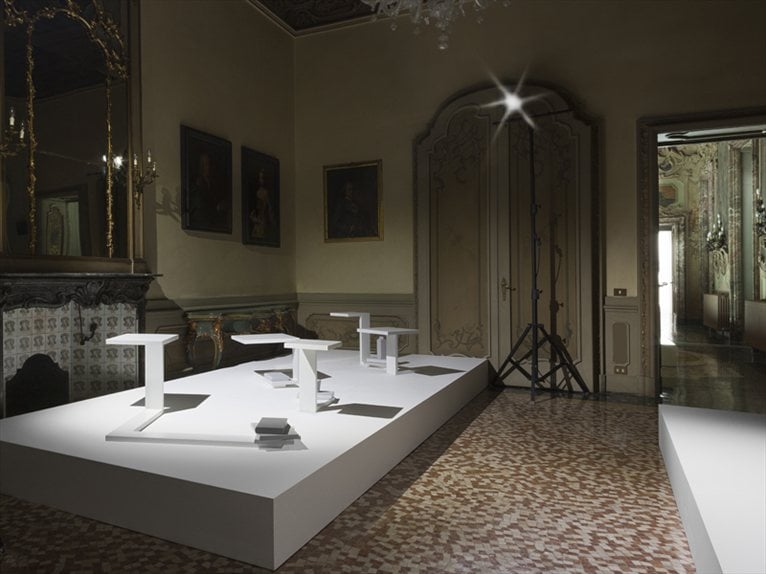 In the last ten years, the studio has produced more than 200 individual designs, a polyhedric repertoire including glass, furniture, lamps, seating, and modular systems.  New prototypes and limited editions scatter the five halls of the Baroque palace. The items in the firm’s newest collection, “1%,” include products such as the win-tea cup, the top-tea set, the blockvase, the stack-sake set, and the shrink-plate. Each item in this collection is limited to 100 copies, a choice which one may interpret as an effort to increase the value of each piece while praising a minimalist design.  In an era in which we feel overwhelmed by mass production while simultaneously fiercely critical of the contamination between art and design, “1%” identifies the solution: in media stat virtus. Neither few nor millions, but a hundred; the perfect number, according to the Japanese firm, to enjoy the idea of owning a part of the entire production. This collection illustrates that the fleeting border between the fields of art and design is easy to cross, and it’s not just a matter of numbers.

As Oki Sato said several times, although his creations have a deep aesthetic effect on their audience and establish a strong emotional bond with them, he is not an artist and does not create something from what he intuitively finds beautiful or interesting. There must be logic and meaning. Sato’s process of creating does not start with a white canvas, but with a problem to solve. The fragile beauty of his designs is more a result than a criteria, and this is what secretly links his inexhaustible creative vein to the architecture field. 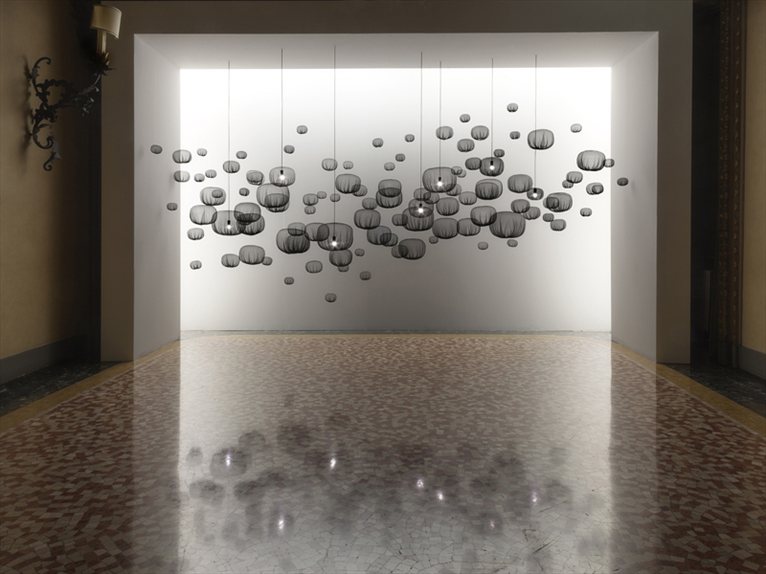 In addition to “1%,” the exhibition brings together pieces from five other collections of furniture designed and developed over a series of solo exhibitions: the modular shelving system known as “Scatter Shelf” (Friedman Benda Gallery, New York, and Carpenters’ Workshop Gallery, London and Paris) is a black shelf made from thin strips of black acrylic  sheets; the “Farming-net” lamps (Carpenters Workshop Gallery, Paris, 2012) are made from agricultural nets originally used to protect produce from harm; the carbon fiber collection “Visible Structures” (High Museum, Atlanta, 2011); “Thin Black Lines” (Philips de Pury at the Saatchi Gallery, London, 2010), the series of seating and furniture whose structures are defined by a simple, dark line; and the specimen edition “Object Dependencies”, which further questions the relationship between furniture and other objects by way of weakened and dynamic pieces that require additional support from objects in order to increase their stability or alter the way they function. The leitmotif of the objects on display is a measured and rational elegance that does not trace its roots in an exclusively cultural factor, but is the fruit of an uncommon sensitivity and intelligence. 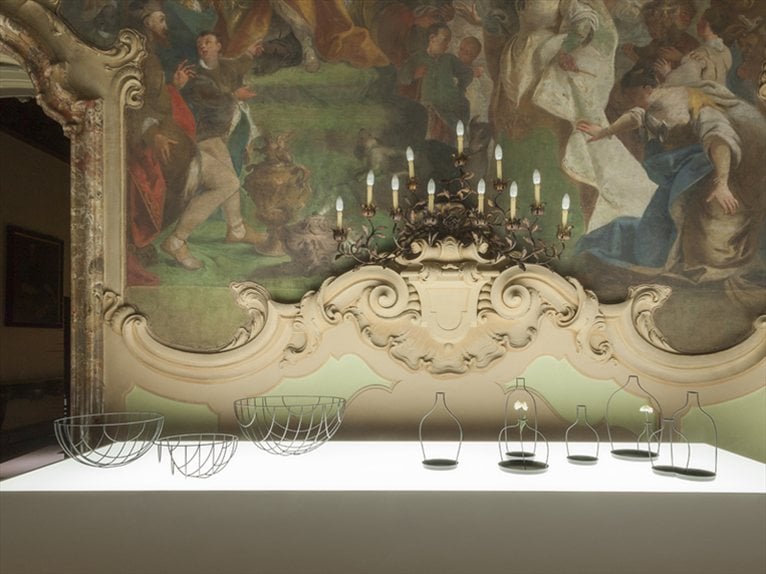 “trial & error” is a programmatic title that perfectly suits the non-stop empirical research of a firm known for its eclecticism. The attention to detail and the will to deeply investigate the properties of the most different materials in an attempt to obtain formal and unpredictable effects have been the research territory of this design studio from Tokyo. Nendo dedicated the exhibition to the attempts and the mistakes in which its designers have invested, and invest daily, in order to feed their production.  Furthermore, it is actually Nendo’s passion for experimentation and courage to dare that makes it possible to find a further connection between the bizarre, late Baroque decoration of the historical residence and the unusual shapes of imaginative and delicate beauty proposed by the studio.

“trial & error” was an exhibition which looked beyond the confines of shape and which found its identity in the space that envelopes bodies, that osmotic band of relation which should be cared for. 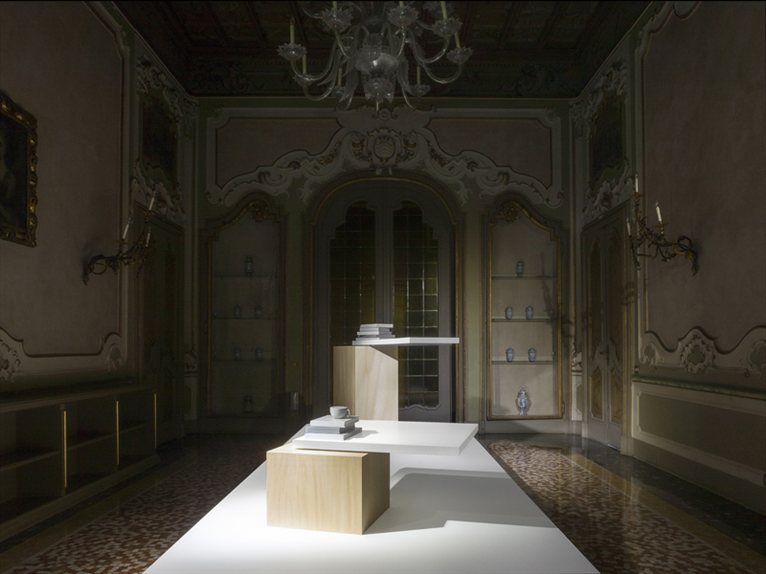