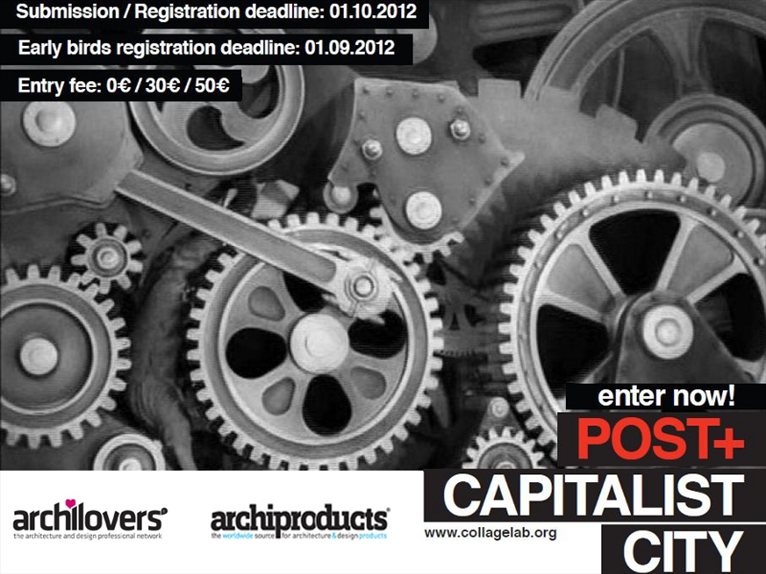 After the first competition POST+CAPITALIST CITY "Shop" (for which the winners will be announced on 1st August), CollageLab has just published its second competition in the Post+Capitalist City cycle of competitions called  POST+CAPITALIST CITY "Work". The call for ideas is for prospective thinking in terms of urban planning, architecture, political, social and economical spaces in a global scale.

In times when machines are more profitable than men, urban centers are adapting their structures towards information and services. But can those new growing sectors satisfy the global demand? How will cities reorganize themselves after this shift where flexibility and competition in work reach new levels?

The psychological dogmas that formed the industrial society many decades ago, like loyalty and lifelong commitment to an enterprise, were replaced with the fear of job loss, the guilt of being jobless, or the question of how far you would go – geographically and ethically – for a job. Does our urban future lie in everyone becoming an entrepreneur, or in sharing collective knowledge in Open Source projects? Can we find new ways of producing and working? How will the global enterprise be able to produce sustainable levels of work through motivated workers, when nowadays humans are seen as resources and not workforces? How will the work of the future be measured, when the production of perceived, speculated value has no theoretical limits? Can work finally be released through technology? And finally: What are the possibilities for our cities? Apart from “job-sharing” and co-working spaces, what could be transformed spatially to change towards a sustainable working culture?

Here is where this competition for ideas comes into play. It is open to students, architects, urban planners, designers, artists and all active thinkers who want to submit their ideas and share their visions to the world – any ideas which are urban and prospective. You can think about a global solution for urban conditions on a world scale or talk about your own street corner! Both are interesting!

The selection criteria will consider the final design proposal as the hypothesis taken by the entrants.

As this competition tries to develop critical and concrete ideas to a hypothetical situation, the entrants are invited to define the context (political, economical and geographical, including if needed a time schedule) in which their proposal has to be related to be credible and optimized.

Groups can enter as many projects as they like.

The entrance fee for for early birds is 30 Euros (until September 1st) after that will cost 50 euros, although candidates from countries which are heavily indebted + Countries from the Eurozone officially in crisis will not pay anything.

The winning entry, judged by a jury made up of the editorial office of Collagelab and an invited guest with significant influence in architecture and urban planning, will win 65% of the entrance fees collected (after tax and expenses) while the second placed winner will win 35% of the final amount. There will also be honourable mentions for particularly meritworthy proposals while a selection of projects will be featured on the collagelab website and also on Archilovers, who are media partners for the competition.

Collagelab is a collective for research in architecture and urbanism and was founded in 2011. It investigates past and future space strategies as well as on-going developments of the built and non-built ideas, that represent society in time and space. It brings its on-going ideas to life by means exhibitions, competitions, workshops and other publications.

You can download the full brief on Archilovers here or visit the collagelab website to submit your proposal and obtain more information here.