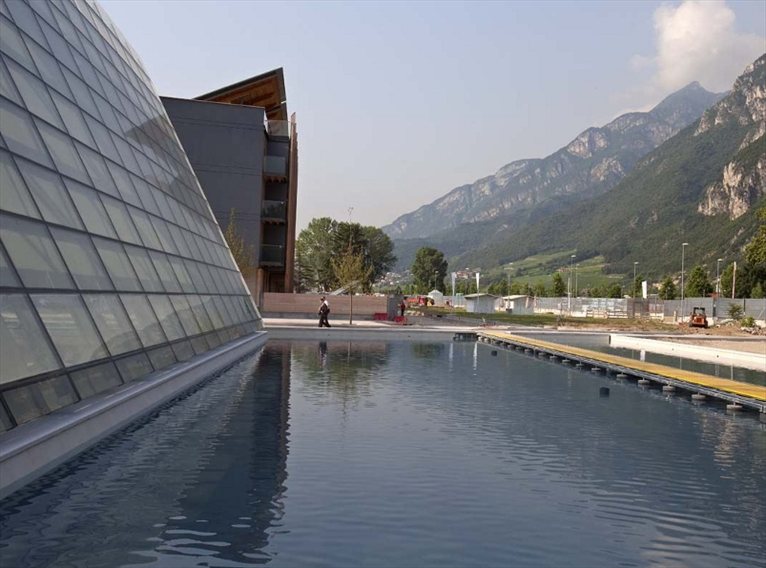 The opening is scheduled for next summer, but work on the interior design has already begun. We are talking about the MUSE - Museo delle Scienze in Trento Italy, the Science Museum designed by RPBW - Renzo Piano Building Workshop and handed over to the community on 29th June.

“When you finish a project - said Renzo Piano – it is an emotional moment for an architect, from that moment on, the project is no longer yours. We have been working here for ten years and these ten years have been important; there is cohesion and enthusiasm here. We managed to complete this building on time and within the budget, almost a miracle. But this is not the end of the project; today we hand over the spaces to the city and to the Museum, so that they can be filled with content. The real challenge begins now”.

The urban context of the new museum comes within the project concept of the work on the ex-Michelin areas, of which it represents the social and cultural core and the centre of collective interest. The urban design concept of the whole project focusses on recreating a real piece of the city in this area, with its articulations and its functional complexity.

The total volume of the area is divided into 11 “blocks”, progressively named from letter A to L, in which commercial, residential and tertiary functions are located, as well as those activities of public interest. Along with the park, they “embrace” the whole new quarter also physically, becoming at the same time important urban attractions for the whole city.

The architectural idea came from the search for a correct balance between the need for flexibility and a precise and coherent response in the shapes to the scientific content of the cultural project. A museum in which the major themes of the exhibition are also recognizable in the shape and in the volumes while maintaining a very flexible layout of spaces, typical of a new generation of museum.

The architectural form thus arises not only from the volumetric interpretation of the scientific content of the museum, but also from its relation with the surrounding environment: the new neighbourhood, the park, the river, the Albere palazzo. All these inputs then physically take shape through a freer declination of the architectural elements that make up the rest of the neighbourhood in its other tertiary, residential and commercial functions.

The building is made up of a sequence of spaces and volumes, of solids and voids, lying on a large body of water on which they seem to float, multiplying the effects and the vibrations of light and shadows. All is held together, at the top, by the large flaps of the roof, which enhances the shapes, making them recognizable even from the outside.

The project stands out for its stylish, futuristic profile, a tribute to the peaks of surrounding mountains. Inside, a spacious covered plaza welcomes visitors and separates the public area of the building from the area reserved to the staff. The work spaces include offices, research laboratories, workshops, warehouses for the collections and exhibitions, archives of the library and technical spaces. The exhibition halls, the kid's area, the conference room, the laboratories, classrooms, a tropical greenhouse, the library and bar are located in the public area. The total area of the building measures approximately 12,000 square meters.

The architectural project has been designed with particular regard to environmental and energy saving aspects. The building has a centralised and mechanised utilities plant, which uses various sources of renewable energy (particularly solar energy, using photovoltaic cells and solar panels, as well as geothermal energy by exploiting geothermal probes for heat transfer).

In construction, locally sourced materials have been preferred (concrete and verdello stone cladding) so as to reduce pollution from transport and rapidly renewable materials, such as bamboo, for the floors of exhibition areas. Wood is employed for the structural elements. Thanks to the partnership with the Distretto Tecnologico Trentino, the project has undergone the procedure to achieve LEED® Gold level certification.