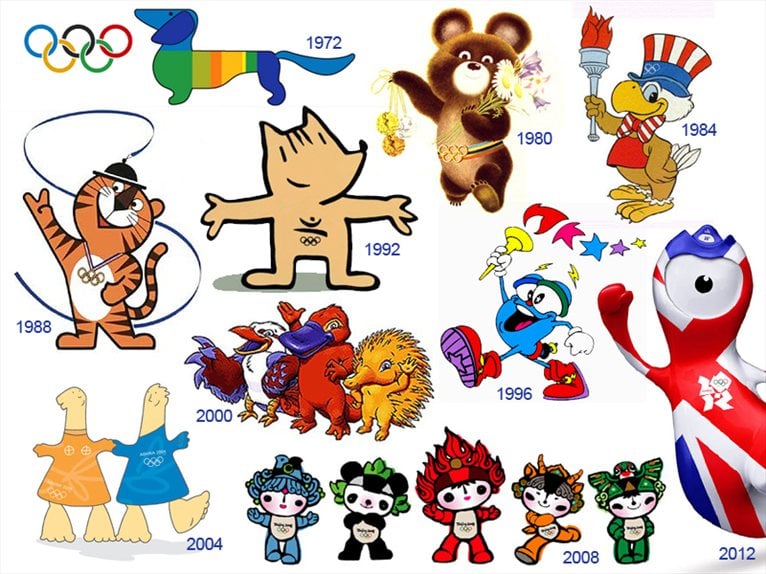 The Olympic mascot is a character, usually an animal native to the area or occasionally human figures, who represents the cultural heritage of the place where the Olympic and Paralympic Games are taking place.

Since the 1972 Olympics in Munich, Germany the Summer Olympic Games have had a mascot, a Dachshund dog called Waldi. A popular breed in Bavaria, it represented the attributes required for athletes - resistance, tenacity and agility.

The first major mascot in the Olympic Games was Misha, designed by the children's book illustrator Victor Chizhikov for the 1980 Summer Olympics in Moscow. The bear was the national symbol of the Soviet Union.

The symbol of the United States, a bald eagle is the mascot of the 1984 Olympics in Los angeles. The mascot, called Sam the Eagle, was designed by Disney Legend Bob Moore. He also shares the name of Uncle Sam, another American symbol.

Hodori and Hosuni were the mascots of of 1988 Olympics in Seoul, Korea. Two tiger cubs (very commons in Korean legends) designed by Hyun Kim.

Cobi (designed by the famous artist Javier Mariscal) was the official mascot of the 1992 Summer Olympics in Barcelona. He is a Catalan Sheepdog in Cubist style inspired by the masterpieces of Picasso.

Izzy, the first computer-generated mascot, was the official mascot of the Atlanta 1996 Olympics. Named Whatizit (What is it?) at its first introduction the animated character with the ability to morph into different forms was a departure from the Olympic tradition in that it did not represent a nationally-significant animal or human figure.

The official mascots chosen for the 2000 Olympics in Sydney were Syd, Millie, and Olly, three typical animals of Australia representing respectively water, land and air. Syd the Platypus was named for 'Sydney', the host city for the Games. Millie the Echidna was named for 'Millennium'. Olly the Kookaburra was named for 'Olympics'. They were designed by Jozef Szekeres.

Athena and Phevos, designed by Spyros Gogos, were the Olympic mascots of the 2004 Summer Olympics, held in Athens. The pair are one of the few examples of anthropomorphic mascots in the history of the Olympics. They are inspired by an ancient Greek doll and their names are linked to ancient Greece.

The Fuwa (literally "good-luck dolls") were the mascots of the 2008 Summer Olympics in Beijing. The five names form the Chinese phrase "Beijing huan ying ni" (北京欢迎你), which means "Beijing welcomes you". Each representing an Olympic ring and Feng Shui element. The designs were created by Han Meilin, a famous Chinese artist.

Here we are! Wenlock and Mandeville are more than just two drops of steel with cameras for eyes... they are the official mascots for the starting 2012 Summer Olympics and Paralympics being held in London, United Kingdom. Wenlock (the blue-one) is named after the village of Much Wenlock in Shropshire, which hosted a precursor to the modern Olympic Games in the 19th century. Mandeville (the red-one) is named after Stoke Mandeville, Buckinghamshire, where the first Paralympic Games were held, in 1948. Both represent the the UK's start of the Industrial Revolution.