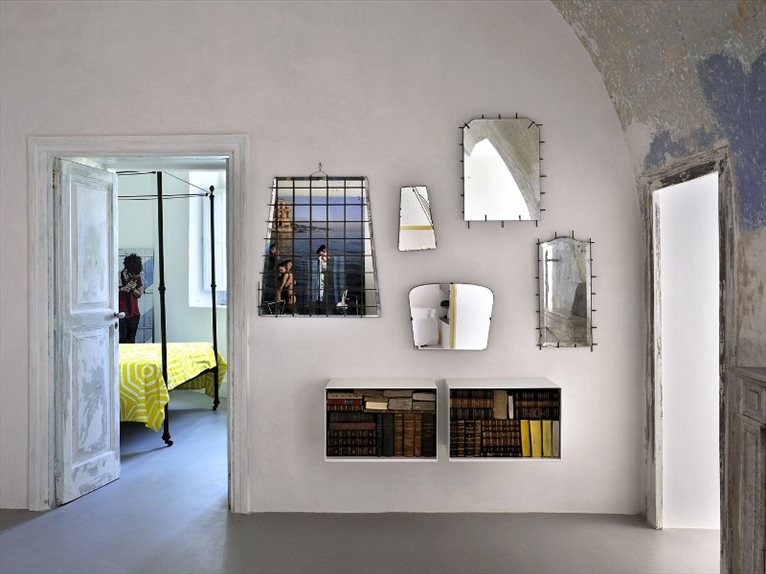 Experiencing Capri in its authenticity, discovering the most characteristic aspects of the island was the starting point of the architectural project of the Neapolitan architect Giuliano Andrea dell’Uva for Capri Suite, a quaint house which offers its guests the services and the comfort of a hotel suite.

The old structure, located in the heart of Anacapri, a pretty village situated at the foot of Mount Solaro, is located in the spaces once attached to the convent of the church of San Michele. The loggia, overlooking the lovely internal courtyard and that once connected the church of San Michele to the convent, is now the area where breakfast is served: the natural stone wall treated with whitewash – a typical technique of the island's architecture – reveals the stratification of the structure over the centuries. The contrast is given by the furnishing, design icons from the mid-twentieth century designed by Gio Ponti and by the lemon yellow colour, which is the dominant colour theme in the house.

A low passageway in the wall connects the loggia to the living room, the contrast between the old structure and new work is decisive and strong.

The original lime colours, different shades of azure or turquoise, found under several layers of paint, provide the backdrop to the modern furniture, creating a striking stylistic contrast. Behind the desk made in 1958, and designed for the Olivetti factories in Milan, the work-performance of the Neapolitan photographer Luciano Romano, which represents an attempt – by the artist – to reconcile the city of Naples and its inhabitants; the living room of Caprisuite, a play on perspective reflects the work in a series of old mirrors positioned on the opposite wall, which transform, to the eyes of the person looking, into windows open on the sea.

Behind the linen sofa, the colour theme of yellow returns, with the work of Gaetano Pesce positioned on an iron stand; an imaginary door divides the wall and the strong colours of the room, in front a low 1980's table designed by Paolo Piva and an old 1960's garden chair.

The living room leads onto the two suites, a smaller one overlooking a garden, was once a kitchen where you can appreciate the Caprese lime-coloured ceiling, over the late 19th Century four-poster bed, a hand-painted quilt made by the historic Neapolitan company of designer Livio de Simone, which incorporates the designs of a collection presented at Moda Mare Capri in 1972, the linen fabric, also by Livio de Simone, returns in the adjoining bathroom, trapped in glass where it acts as a wall cladding.

The other larger suite overlooks the courtyard: a minimal canopy bed with a quilt made of the same Livio de Simone fabric, in a different colour variant.

Exploiting the thickness of the walls, a concrete bath has been created where you can abandon yourself after a long day at sea, or in winter, to the warmth of the adjoining iron fireplace.

What surprises the guest of this room is the great bathroom made in the ancient loggia of the cloisters of the church of San Michele: Neo-Pompei frescoes emerged from the walls and contrast with the large slate coloured resin shower.

A particular feature of the structure is undoubtedly the courtyard, which recalls those of the old buildings in Spain or Greece, a space created over the centuries by the stratification of the bordering buildings. Vases with agaves and prickly pears, typical wild plants of the island, are positioned like books in a macroscopic bookcase.