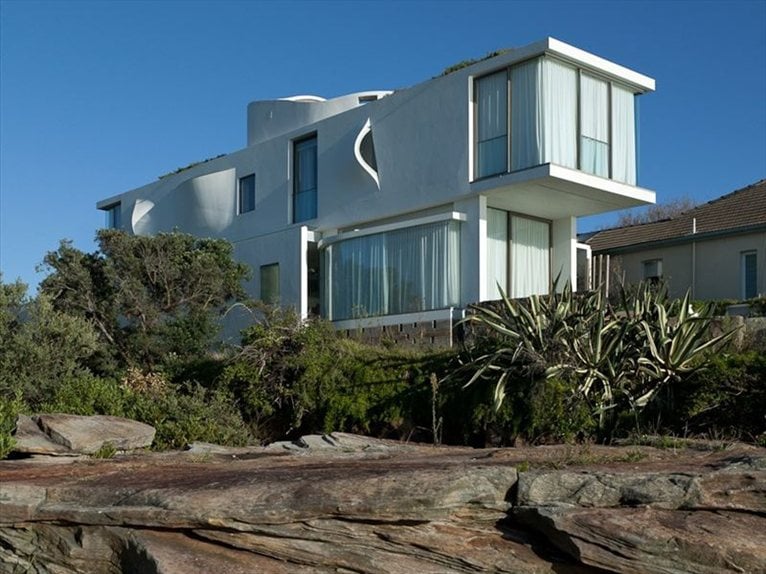 The Seacliff House has been built on a site that offers a spectacular view of the ocean, the adjacent national park, the cliffs and the headland south of Sydney. The Australian firm Chris Elliott Architets, curator of the project, had to cope with a series of issues related to the site, which despite its scenic qualities, is subject to strong winds and thunderstorms.

They, thus decided to opt for a design solution that can accommodate the peculiarities and limits of the place, including the very long and narrow shape of the lot. The building is tall for reasons of privacy, but the ground floor is presented conceptually like a kind of transparent platform, open towards the landscape and has a compact nucleus containing a staircase, bathrooms, laundry and pantry which create a minimal visual impediment.

The basement level is conceived as a sort of grotto, that blends water, rocks and natural light, obtained by digging and removing part of the rock itself. However, the theme of water, recurs in more than one element and at various levels with a swimming pool, a shallow reflecting pool with a bridge and an outdoor bath. Similarly intense rays of light penetrate the interior spaces as if they were cracks in the rock.

The sleeping level is designed as a linear and comfortable block, with a series of openings which give a glimpse of the outside according to the various combinations of the internal shielding.

The external surface of the house is punctuated by a series of 'spoon-shaped' openings, which define the particularity of the intervention, with the dual purpose of letting in natural light and offering exclusive panoramic views.