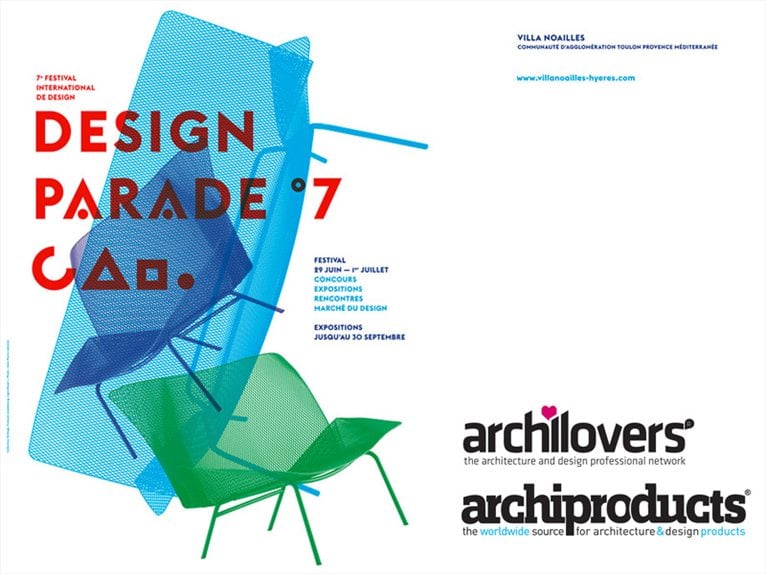 This Friday evening (29th June) the 7th international festival of Design – Design Parade 7 gets under way to the backdrop of Villa Noailles in Hyères on the Côte d’Azur overlooking the bay of Hyères.

The villa was commissioned by the de Noailles family in 1923 to modernist architect Rob Mallet-Stevens. The owners Charles and Marie-Laure de Noailles were art collectors and enthusiasts of modernism and sponsored a series of artists and designers who were also responsible for much of the interior design of the house: Salvador Dali, Lipchitz, Giacometti, Chareau, Jean-Michel Frank. The owners were also cinema enthusiasts financing three masterpieces: in 1929, Man Ray’s surrealist film “Les Mystères du Château du Dé”, which was filmed in the villa, then in 1930 Jean Cocteau’s first film “Le Sang d’un Poète” and Luis Buñuel and Salvador Dali’s second film “L’Âge d’Or”.

The Festival brings together exhibitions and exchanges around an international competition open to young designers. The 10 finalists were selected by the Jury in May and will be present at the festival. In a manner similar to its fashion and photography festival, Design Parade enhances the assistance that Villa Noailles provides to young artists and unites designers, industry professionals, journalists and the public.

This year Archilovers and Archiproducts are delighted to be official media partners of the festival in keeping with their support for design events worldwide and we will be bringing you the results of the competition as they are announced.

It all kicks off on Friday evening with a welcoming cocktail and the opening addresses followed by the opening of the palm trees and tropical plants market which will continue for the 3 days of the event. Then throughout Saturday and Sunday there will be workshops, exhibitions and meetings with designers including industrial designer François Azambourg, who is president of the Jury and will announce the winners of the design contest on Sunday afternoon. The winner of the “Grand Prix” will receive a series of prizes, including not only a monetary reward (a 5,000 euros grant), but also research residencies, participation in workshops and a solo exhibition in Villa Noailles next year. A public prize will also be awarded to the candidate chosen by the audience present during the festival’s three days.