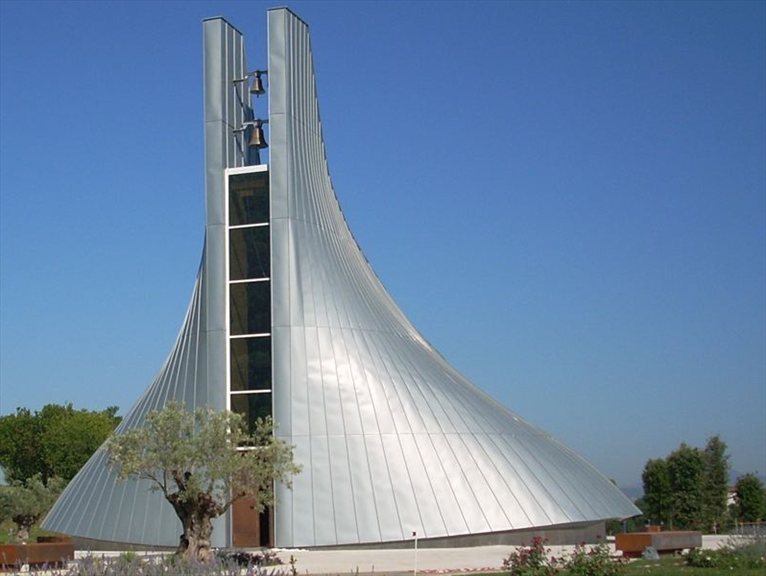 Last Saturday, June 23 a new project designed by Pininfarina Extra Turin, the Cappella Gentilizia (Noble Chapel) commissioned by entrepreneur Raffaele Perrella, but also open to the public, was opened at "Madonna della Stella" in Riardo, in the province of Caserta, Italy.

Located outside the town cemetery of Riardo, the building was constructed on land owned by the client covering about 500,000 square meters and also including the Manor house and the Perrella family's farm: the whole private park is listed to protect the natural beauty of the land on which the chapel is built.

The envelope of the work, which draws inspiration from the gentle hills, restores the image of a tent that starts from the top of the bell-tower to cover not only the burial niches but also the spaces for praying and liturgical celebrations.

The idea of suspending the tent-sculpture is accentuated by the presence of a pond around the elliptical shape of the chapel, which is raised with respect to the churchyard floor.

The sinuous zinc-titanium sheet envelope is interrupted by a window which starts from the bell tower and splits along the base perimeter of the work, with the figurative intention of letting in light from above and at the same time leads the entrance up to the sky.

The main entrance to the chapel is located to the west with panoramic views over the surrounding landscape, while the secondary one points east, facing the hills and the wood and with an oak tree deliberately positioned opposite the entrance.

All the interior details and furnishings of the chapel, from the cross with the tabernacle, to the altar, the font, the organ, the chairs were designed by Pininfarina design office, which has tried its hand for the very first time at sacred architecture.