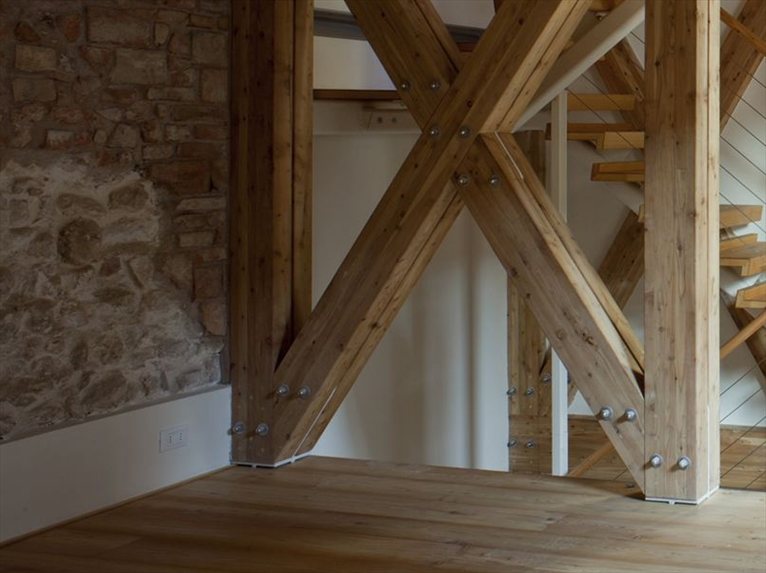 Casa Ceschi in Vicenza, Italy was renovated by Giovanni Traverso and Paola Vighy and backs onto the ancient 12th century boundary walls. The building was carefully "listened to": restoring its original walls using conventional techniques, while inside an independent project was developed permitting a redistribution of the internal rooms in a functional manner.

The vision of the restoration as a quest for sustainability was achieved in the broadest sense of the term, including technical, economic and energy issues. A structurally light and reversible intervention was chosen, built with high-tech content systems, which permitted a prefabrication phase along with a rationalisation of the execution and assembly phases.

A new structure was fitted inside the emptied walls in the casa Ceschi restoration work. It is a skeleton of laminated larch wood which extends the full height of the building, defining its distribution and establishing a collaborative relationship with the container with excellent seismic features.

Indeed, the new structure makes no changes to the external bearing walls, but replaces the structural function of the existing internal partitions with a light frame system. All the elements making up the structure were prefabricated based on a high level of precision in phases of surveying, design and execution. Glass is used in the interior for its diffusion of light, both for structural solutions and interior design: the natural light coming from the outside is filtered by horizontal and vertical glass surfaces and creates a sense of continuity between the spaces.