'Berlin Brain' Foster and Partners redevelopment of one of Germany's most important academic institutions is completed with the opening of the Free University's Faculty of Philology Library. The scheme includes the faithful restoration of the university's iconic Modernist buildings in addition to the design of the new campus library. The distinctive cranial form of the library has already earned it the nickname - 'The Berlin Brain'. Its four floors are contained within a striking curved translucent enclosure that creates a dramatic diffusion of daylight and is naturally ventilated for 60 percent of the year. Housing the combined former collections of 11 separate libraries, the Faculty of Philology Library occupies a site created by uniting six of the University's courtyards. Clad in aluminium and glazed panels, the building is organised on a radial geometry. An inner fabric membrane of glass fibre filters the daylight and creates an atmosphere of concentration, while scattered transparent openings allow momentary views of the sky and glimpses of sunlight. The bookstacks are located at the centre of each floor, with reading desks arranged around the perimeter. The serpentine profile of the floors increases capacity for the reading desks and creates an edge pattern in which each floor swells or recedes with respect to the one above or below it, generating a sequence of generous, light-filled double-height spaces in which to work. Set to consume 35 percent less energy than a comparable scheme, the progressive energy strategy is rooted in the innovative double-layered skin of the building which creates even and diffuse daylight conditions and directs air through a series of openings in the diaphanous enclosure, enabling natural ventilation. Water pipes embedded in a chilled concrete interior structure act as thermal stores to heat and cool the re-circulated air, regulating the interior temperature, and leading to substantial energy savings. The University's mat-like campus was designed by Candilis Josic Woods Schiedhelm, and when the first phase was completed in 1973 it was hailed as a milestone in university design. The facade was designed in collaboration with Jean Prouv, following Le Corbusier's 'Modulor' proportional system. It was fabricated from Corten steel, which when used in appropriate thicknesses, has self-protecting corrosive characteristics. The rusty appearance of these buildings led to the nickname of 'die Rostlaube' - the 'rust-bucket'. However, in the slender sections used by Prouv the steel was prone to decay, which by the late 1990s had become extensive. As part of a comprehensive process of renewal the old cladding has been replaced with a new system detailed in bronze, which - as it patinates naturally with age - emulates the details and colour tones of the original. Foster and Partners' redevelopment of the campus has also involved a comprehensive process of planning and reorganisation. Many of the original colour schemes have been restored in the fit-out, to the extent that the carpets came from the original suppliers. As Lord Foster noted, the structural system proved so flexible that much of the remaining structure from the reorganisation could be demounted and reerected in different locations. This proved that "the original design of the Free University was, in many ways, years ahead of its time - an inspiration that we drew from as we designed the new library to be a forward-thinking exemplar of environmental building." Speaking at the Opening Ceremony, Lord Foster said "Foster and Partners are delighted to have been a part of the redevelopment of the Free University, Berlin's largest university and one of its most important cultural institutions. Our new library has been designed to enable generations of students to study in an building that is filled with natural light and air - and is an exemplar of environmentally progressive design. It was a privilege to restore the university's famed modernist campus, designed by heroes of mine on the admirable principles of democracy and open communication."
21 users love this project 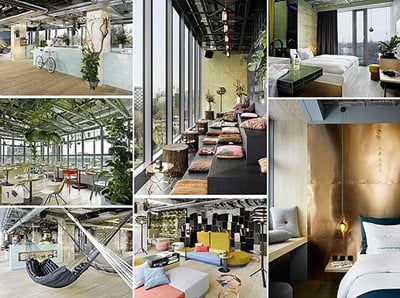 Travelling with an architect : discovering Berlin

'Berlin Brain' Foster and Partners redevelopment of one of Germany's most important academic institutions is completed with the opening of the Free University's Faculty of Philology Library. The scheme includes the faithful restoration of the university's iconic Modernist buildings in addition to the design of the new campus library. The distinctive cranial form of the library has already earned it the nickname - 'The Berlin Brain'. Its four floors are contained within a striking curved...