The Old Water Tower is a new four bedroom certified 'Passivhaus' family home on the edge of the village of Chieveley in West Berkshire.

The house is conceived as a modern interpretation of the timber framed barns of the area, that when seen from the distance reads as a simple, traditional, agricultural building. On closer inspection it reveals itself as a crisply designed, carefully made, contemporary interpretation of the historic buildings it draws inspiration from.

We have aimed to create a house that is on the cutting edge of sustainable design, yet eschews the “hair shirt” approach to sustainable living that many people think of when considering environmentally friendly homes. The house is as easy to live in as any “normal” home, yet costs virtually nothing to run and could be entirely self-reliant if a suitable number of photovoltaic and solar thermal panels were fitted to the roof.

Another critical aspect of the Passivhaus way of building is that the house provides exceptional levels of internal comfort, year round. A Mechanical Ventilation & Heat Recovery (MVHR) unit provides constant background ventilation, removing stale air and drawing in fresh air, so the house always has a fresh, ventilated feel, while maintaining its warmth.

The house has triple glazed windows, which are openable (debunking another “Passivhaus” myth which is that the house must always be closed) and large triple glazed sliding doors. External blinds on the East, South & West elevation are automatically deployed when the internal temperature of the house reaches 21 degrees, thus reducing the chance of overheating.

The house is entered via a drive from the lane. A gate between a bike store and bin store opens into a small paved court and a path leads through a beech hedge and across the main garden to the front door, which is set back into the facade.

The east elevation has small windows, to reduce heat loss and to avoid overlooking adjacent houses.

There are only glimpses of the landscape beyond, through windows and the front door. The house sits away from all boundaries, so it can be walked around, but towards the western edge of the site to take full advantage of the views.

The north elevation only a few small windows, as the greatest heat loss is from this side of the house, and to avoid privacy issues with the nearest neighbours.

The house has delightful views over open countryside to the west, and the whole orientation of the house has been geared towards these views, even though it is not an ideal aspect from a Passivhaus point of view.

Fenestration is carefully arranged to take advantage of the views from key points in the main rooms. All the windows on the west elevation have automatic electronic external blinds to deal with the potential of overheating due to solar gain.

The garden to the west is raised by 400mm above internal floor level to allow full views of the landscape while eating and sitting outside.

The southern elevation has large windows formally arranged at ground floor opening onto a big paved terrace area, while at first floor level randomly placed small fixed windows at high level offset the formality of the facade, and are inspired by the vernacular openings in dovecotes. The windows are set at high level to avoid overlooking neighbours to the immediate south, and the sunlight through them creates playful patterns in the two “children’s” bedrooms.

The front door is set deep into the east elevation, a simple device that provides a shelter while fumbling for the keys or taking off muddy boots, whilst also allowing one to enter the building in the middle, rather the edge.

The tight entrance porch area is deliberately enclosed to ensure the sense of release that stepping into the entrance hall, which is 8m high, is accentuated. This is intended as physical representation of the relief of returning home after a long day - the joy of returning to the nest, of being safe, warm, able to relax and unwind and spend time with family and friends.

The arrangement of the ground floor rooms hangs off two key axes that run longitudinally through the plan, perpendicular to the entrance axis, and parallel to the all-important westerly views.

The distinct spatial separation of the key living areas, as previously described, is countered by these two axes, and the lack of doors on the ground floor (there are only two - into the utility room and WC), accentuates the importance of the internal vistas through the house.

The arrangement of the first floor is by necessity the opposite of the ground floor, as described previously.

The four bedrooms have distinct characters and all be the “guest” room (which has an attic with storage and plant above it) take advantage of the roof form by opening up to the internal apex of the roof to create a feeling of space in a relatively tight floor plan.

The two bathrooms, placed on the east side of the building, where their requirement for small windows fits with the principle of reducing easterly glazing to prevent heat loss, also open up into the roof pitch. 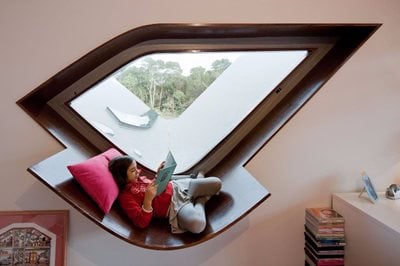 How does design encourage children to play?

The funny side of architecture
Draft
comment
Enlarge image

The Old Water Tower is a new four bedroom certified 'Passivhaus' family home on the edge of the village of Chieveley in West Berkshire. The house is conceived as a modern interpretation of the timber framed barns of the area, that when seen from the distance reads as a simple, traditional, agricultural building. On closer inspection it reveals itself as a crisply designed, carefully made, contemporary interpretation of the historic buildings it draws inspiration from. We have aimed to create...