Standing 383 meter tall, the Altitude facade is designed with a ball balanced between four bats to commemorate the 1996 Cricket World Cup achievement of the Sri Lankan cricketers. This signature residential along with Indoor Cricket Facility, Hall of Fame, Museum, observatory and Specialty Restaurant. The team has selected Colombo as the location for this project. The mixed-use project is an amalgamation of residential units with retail outlets and public space.

As the name suggests, the tower is 96 storied, with varied spaces:

• The Basement Level is a covered parking lot due to extreme weather conditions. It also houses the lift lobby for commercial floors, theatre and the restaurant.

• The Lower Ground Level is also a covered parking lot with a vehicular drop off point on the South side of the tower, and the ticket counter for the 360° Observatory (Level 92) and Sri Lankan Cricket Legends Museum (Level 93).

• Retail outlets spread over an area of 4483 sq. m on the Ground Level, along with an entrance lobby on the East side for the restaurant, theatre, and escalators going down to the 360° Observatory Ticket Counter. On the North side of the plot, a ramp and a stairway leads to a 4.5m level that acts as a separate entry for the residents. The lobby consists of 4 elevators for the residents and 2 elevators for domestic help, leading to the residential lobby (Level 6). A 10m wide vehicular ramp leads the residents to the parking levels (Level 6 to Level 12).

• Level 1 to Level 3 consist of retail outlets that spread over an area of 3783 sq. m. 6 elevators cater to the retail and theatre levels. 18 escalators provide smooth circulation in the retail area. Level 3 hosts the 360° Observatory exit.

• A 6 screen multiplex with a seating capacity of 1420 people is spread across Level 4. Separate elevators are provided for the night show exit.

• Level 5 A & B are allocated commercial spaces for office use with four offices of 770 sq. m each.

• Level 6 is a covered parking for the residents with vehicular drop off point and the residential lobby. The level hosts 9 elevators for residents and their guests, and 3 elevators in the service core for domestic helpers.

• Residents parking is located between Level 7 to Level 12.

• Level 51 to Level 64 host 8 residential apartments per floor of 4BHK.

• The entertainment deck with lounge and coffee shop, gymnasium, spa, out-door yoga and sky decks is situated on Level 66.

• Level 94 and Level 95 hosts a revolving restaurant offering a panoramic view of the city of Colombo.

• An Indoor Cricket Training Academy is located on Level 96.

Despite the various uses and users stacked vertically, each has been provided individual and independent functioning. Designated parking areas, different access elevators and lobbies, and independent services ensure minimal overall between the different users. Altitude has a total of 50 elevators, including two double-decker elevators for the observatory. The elevator speeds vary from 4m/s to 8 m/s.

ARK believes that the infrastructure of a high-rise should enable it to be self-sufficient in terms of its basic energy requirements. The idea behind using alternate energy sources is to make the project self-sustainable. In fact, in case the structure is capable to generate additional units, the advantage can be passed on to the smaller establishments in the vicinity or to the grid itself. Wind turbines have been incorporated and the glass dome that houses the indoor cricket academy has photovoltaic cells which also generate electricity. Suggestions are being made to the HVAC Consultants to use the multi-storey parking façade and natural atmospheric pressure to lower the temperature of the water for the air-conditioning plant instead of using large fans.

Backed by the Sri Lankan government, Altitude designed by ARK promises to be a landmark structure standing tall in Colombo’s skyline. In the recent publication World’s Highest Observation Decks by the Council of Tall Building and Urban Habitat (CTBUH), the observatory at Altitude standing at 350 meter high is listed at #28.

Altitude shall be to Sri Lanka, what the Eiffel Tower is to Paris, and the Pyramids are to Giza; a must-visit landmark that defines the city. A visit to Sri Lanka shall remain incomplete without experiencing the magnificence of Altitude. 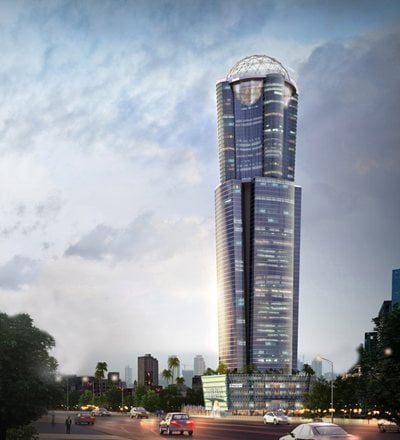 Balancing the needs of Mixed-use Developments without impacting Users

Standing 383 meter tall, the Altitude facade is designed with a ball balanced between four bats to commemorate the 1996 Cricket World Cup achievement of the Sri Lankan cricketers. This signature residential along with Indoor Cricket Facility, Hall of Fame, Museum, observatory and Specialty Restaurant. The team has selected Colombo as the location for this project. The mixed-use project is an amalgamation of residential units with retail outlets and public space.   As the name...