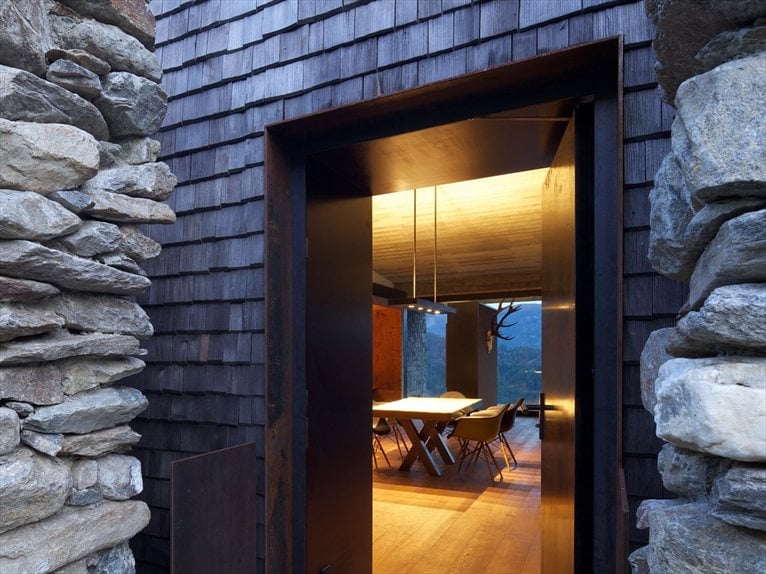 Bergmeisterwolf Architekten has recently completed its work called “Vicino la Cappella” or near the chapel. The project concerned renovating a dilapidated farmhouse at 1400 m above sea level near Vipiteno, in an area with four houses and a chapel.

The strength of the historical chapel suggested the creation of a mountain complex to be exploited as new holiday house for the Brunner family. The project approach envisaged the integration of the various functions in the landscape from the initial phases and working with the objects found, with the landscape and with the remains of the farmhouse (the stone walls and the shingle roof). The building was to have been divided by function, shape and material but form a unit in any case. The project characteristics were to have been opening and moderation which the designers achieve by means of a blend of architecture, landscape and art.

“Having prepared the fundamental elements of the project, the concrete starting point was the stone wall of the old farm” - state the architects. “After a great deal of research we were able to find artisans (stone artists), capable of building the drystone wall without employing mortar according to ancient techniques”. The body of the house has been clad with wooden tiles, exposed to the elements for a year and a half and which recall the chapel roof.

Access to the building is through a small metal bridge. Inside there is a staircase located in a glazed area which passes between stone walls on one side and wood tiles on the other and leads down to the sleeping area.

Simple materials like steel, cement and rough wooden planks characterise the internal space where the body of an old Tyrolean style country breakfast nook can be recognised. The modernness of the work consists of the reuse of ancient materials and of their combination with new ones.