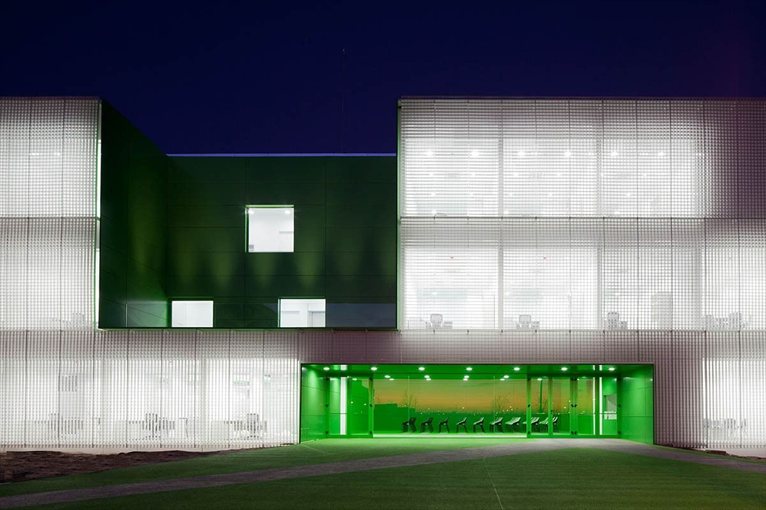 The project of the new Social Services Center in Móstoles, by architects dosmasuno arquitectos, had two strong conditioning factors: first of all, the fact of having to host several areas identical to one another (a large number of unipersonal offices) and to build a large aseptic building whose features do not interfere with the road design and the plot orientation. Secondly, the need to base the relation of the architecture with the surrounding environment on respect for the landscape, thus employing traditional techniques rather than advanced technological systems.

The building, situated in the third biggest city in central Spain, in Móstoles, has been constructed by respecting the existing urban fabric in terms of alignment and volumes and at the same time by combining different functions in order to optimise the internal accessibility around the structure. This type of organisation of the space required a compact volume, guaranteeing simple and inexpensive maintenance.

There are three fundamental phases in studio Dosmasunos' project: during a first phase, the designers wanted to give the volumes of the building great luminosity by extracting mass and by alternating fills and voids, obtaining open and functionally versatile spaces  linked to the different storeys and directions.

The second phase consisted of inserting an independent volume which includes the main entrance of the building and a multi-purpose hall, defining the representative image and the fundamental core of the services centre.

In the third and final phase, the building was covered in a light and flexible envelope which has the function of a thermal and visual shield, guaranteeing good visibility from inside while concealing views from outside.