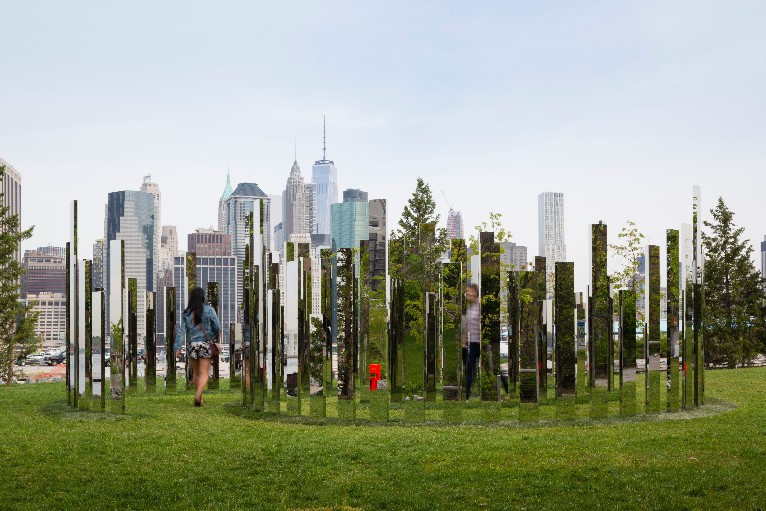 Engaging visitors through pieces that are both accessible and surprising, the exhibition ‘Please Touch the Art’ shows 18 playful sculptures designed specifically for public interaction at Brooklyn Bridge Park by Danish artist Jeppe Hein. The show is open until April 17, 2016. 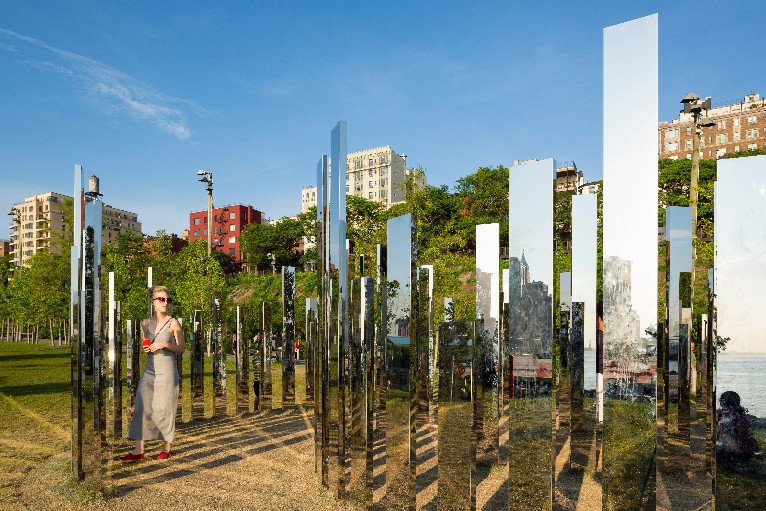 The project includes three distinct works: Appearing Rooms, a series of “rooms” formed when water shoots up from the work’s gridded base forming “walls” that appear and disappear throughout the day; 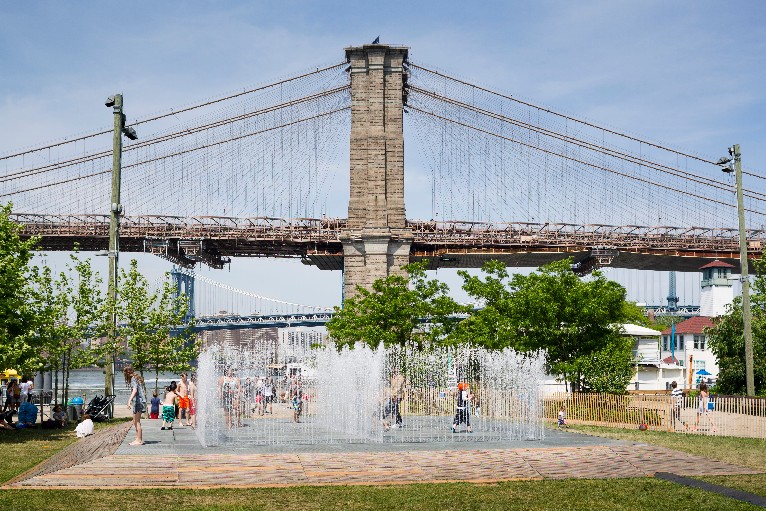 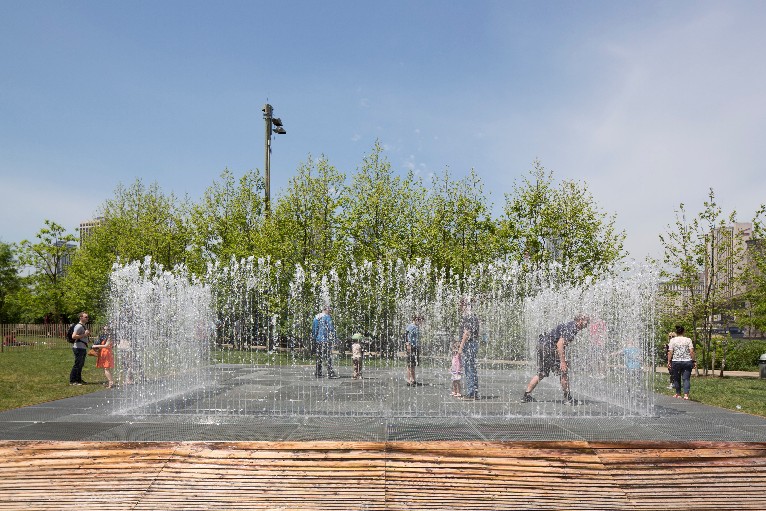 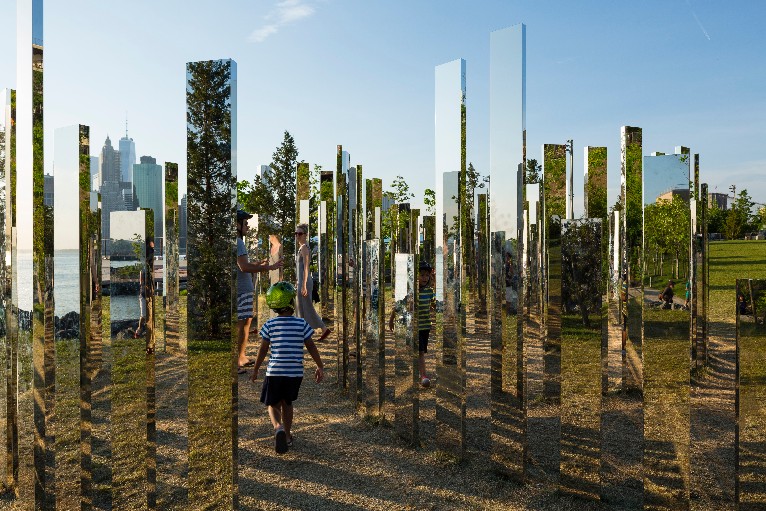 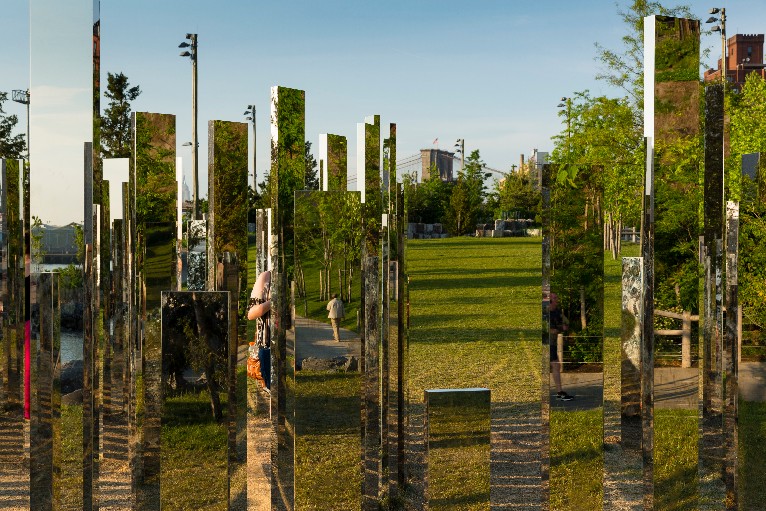 and 16 new Modified Social Benches that upend the idea of a traditional park bench with their unconventional angled, curved, twisted, and bent forms. 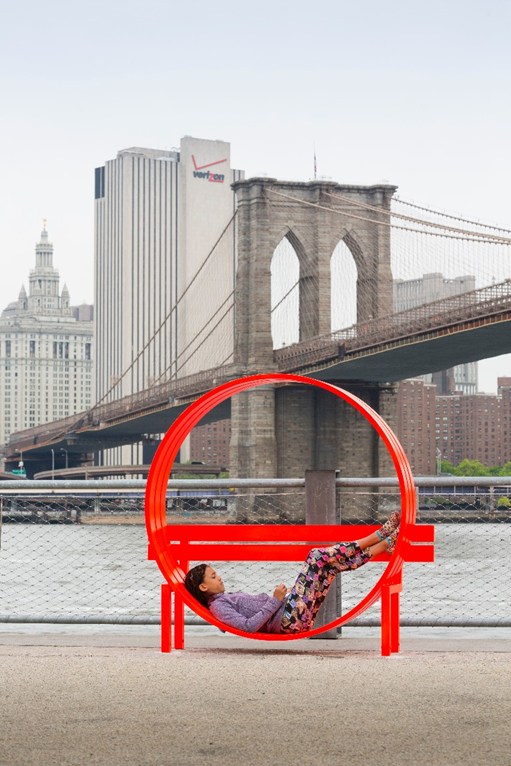 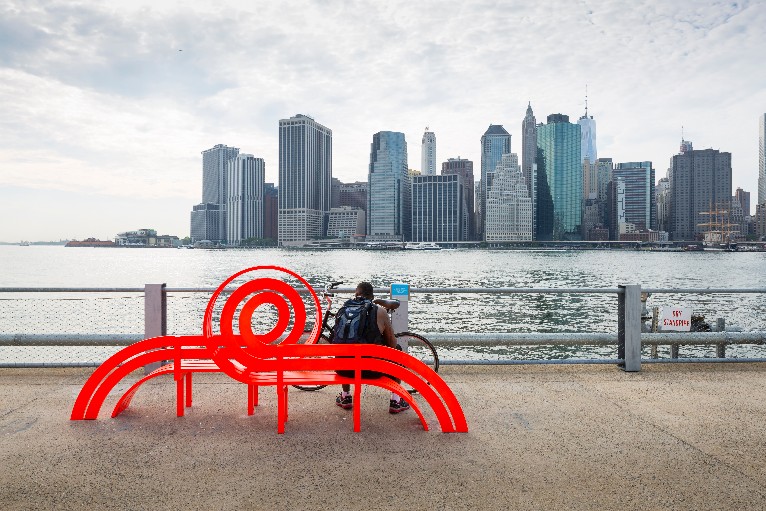 “Imaginative, whimsical, irreverent, and emotionally resonant, Jeppe Hein turns familiar expectations of works of art on their head. Instead of the respectful distance demanded in museums, Hein’s work invites participation,” said Nicholas Baume, Public Art Fund Director & Chief Curator. “Titling the exhibition Please Touch the Art, he encourages us to interact with his art in the most direct physical terms. Through that immersive experience, Hein hopes that his work will also touch us.” 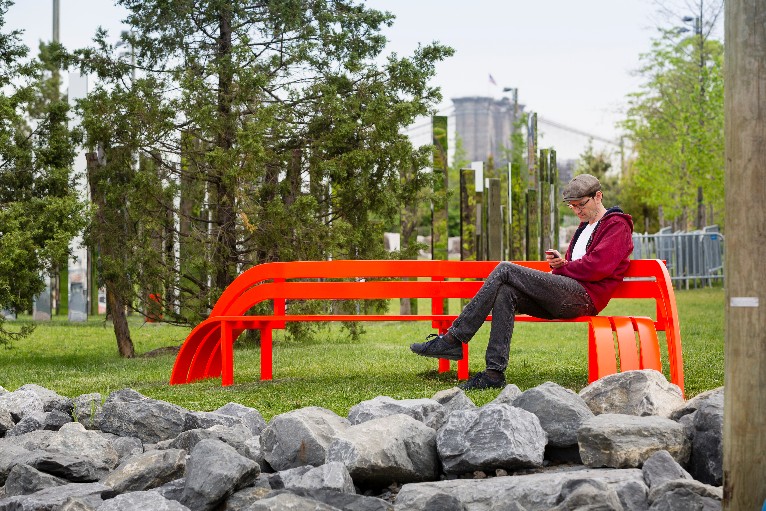 From the beginning, Hein has taken inspiration from nature and the built environment, often conceiving works specifically for public space. This ambitious exhibition brings together works that exist at the crossroads of art, architecture, and technology and responds to the character of Brooklyn Bridge Park. 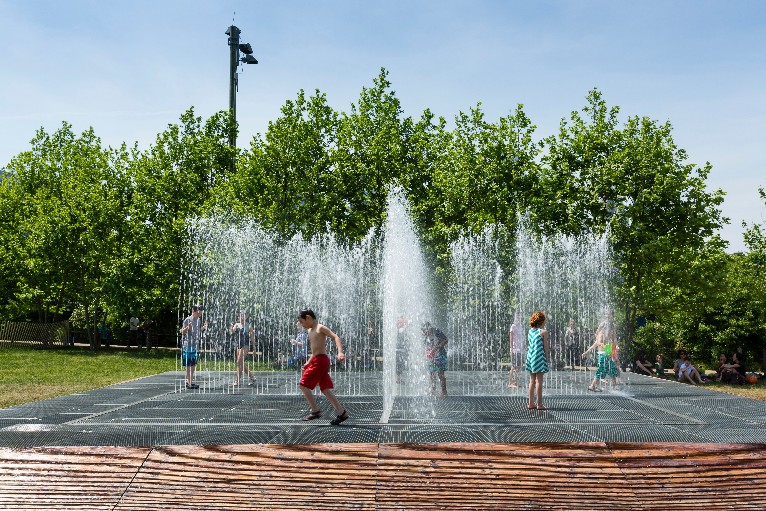 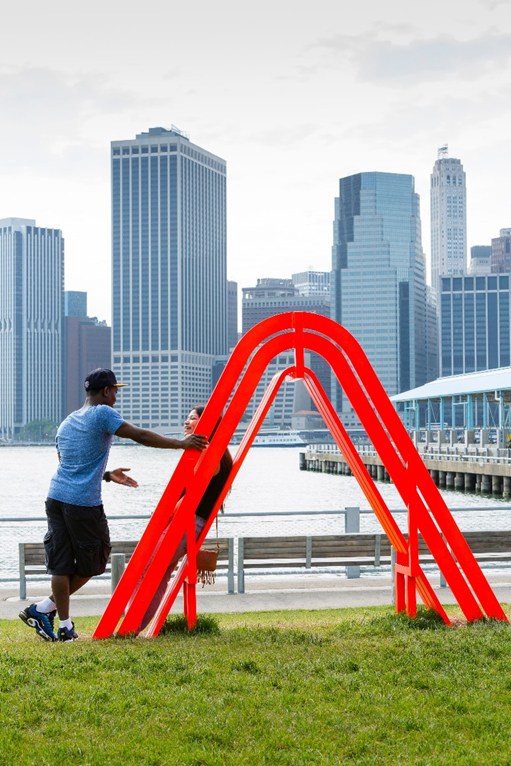 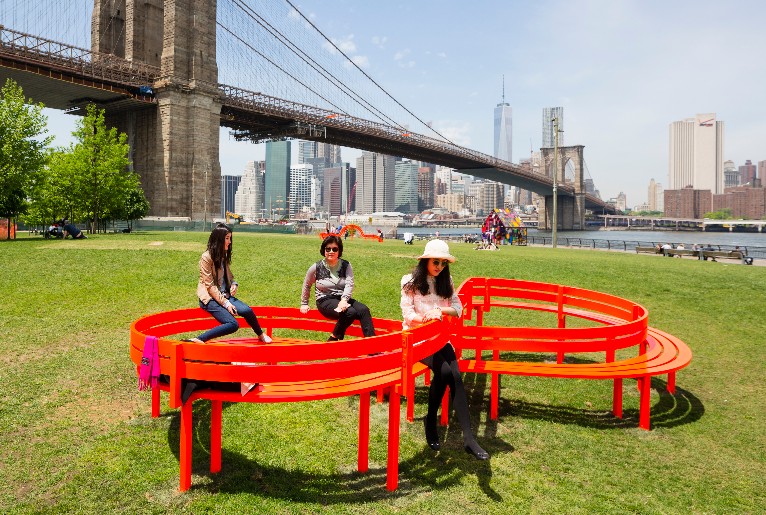 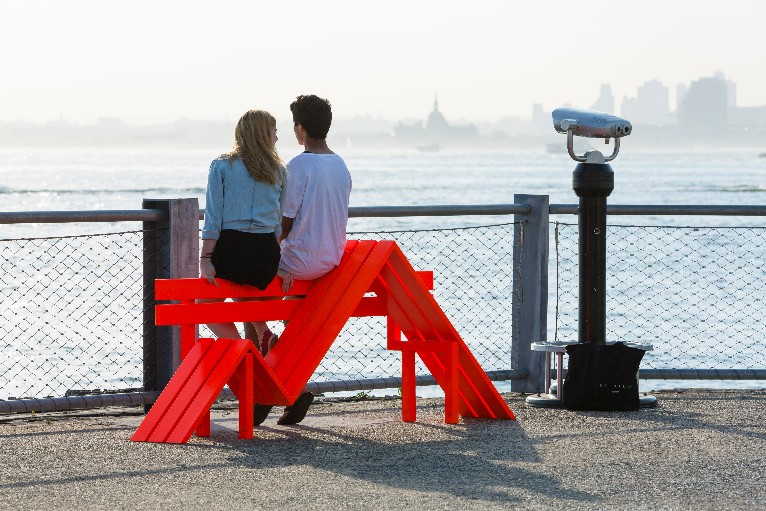 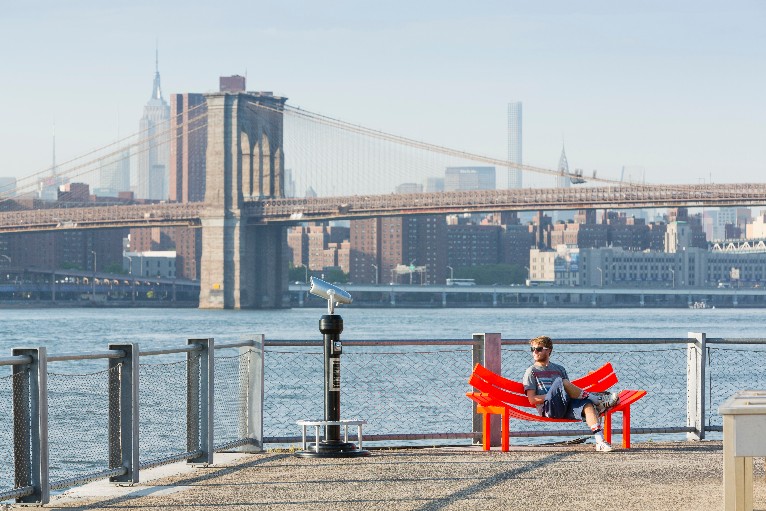 On view throughout the space, 'Please Touch the Art' extends from just south of the Manhattan Bridge down along the waterfront to Pier 6.

Jeppe Hein (b. 1974, Copenhagen, Denmark) lives and works in Berlin and Copenhagen.
He studied at the Royal Danish Academy of Fine Arts, Copenhagen, and the Städelschule, Frankfurt. He has had major solo exhibitions presented at institutions around the globe, including the Bonniers Konsthall, Stockholm (2014); Amos Anderson Art Museum, Helsinki (2013); Faena Arts Centre, Buenos Aires (2012); 21st Century Museum of Contemporary Art, Kanazawa, Japan (2011); IMA - Indianapolis Museum of Art (2010); ARoS Aarhus Kunstmuseum, Aarhus, Denmark (2009); Barbican Centre, London (2007); and Centre Georges Pompidou, Paris (2005), among many others. His work has also been shown in group exhibitions worldwide and is represented in major public collections, including those of the Neues Museum Nürnberg, Germany; Tate, United Kingdom; and Museum of Contemporary Art,
Los Angeles, among others. He is represented by 303 Gallery in New York, Johann Koenig in Berlin, Galeri Nicolai Wallner in Copenhagen, and SCAI The Bathhouse in Tokyo.

To find out more: PublicArtFund.org