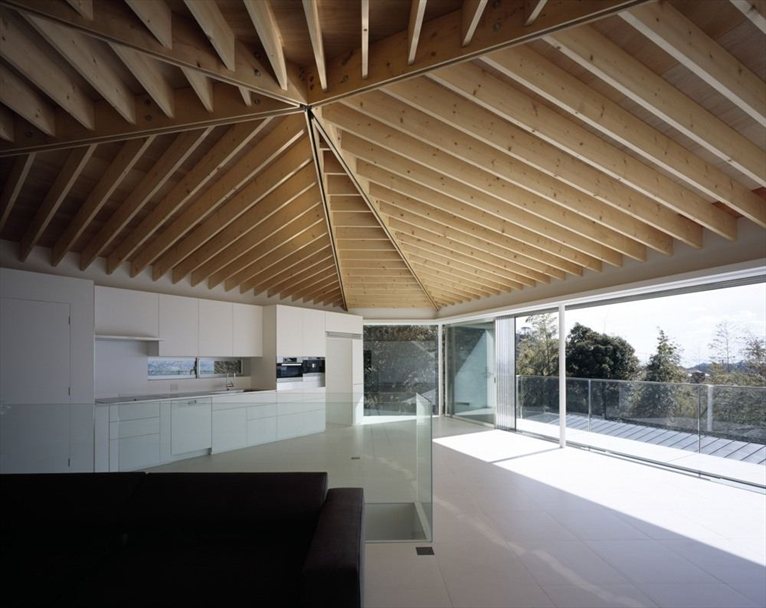 Situated on Mount Kamakura in Japan, the single family house Le 49, designed by APOLLO Architects & Associates, looks out over Sagami Bay. The client is a couple who had always lived in a condominium in the centre of Tokyo, but who fell in love with the panoramic view and the surrounding greenery and decided to move here.

The house consists of rectangular volumes with a concrete base to which a white photocatalytic paint has been applied. These volumes are staggered to create and overlapping effect which makes the project 'modern' while respecting the traditional simple and minimalist oriental aesthetic tradition.

The tree in the courtyard on the first floor ensures a certain degree of privacy. The bedroom and the annexed glassed-wall bathroom, on the opposite side of the ground floor, use the surrounding greenery like a “borrowed landscape” to create a relaxing atmosphere similar to that of a resort.

The second floor, contrasting with the privacy of the first, is an open and spacious area. The size of the windows has been calculated to contain the panoramic views of the forest and of the ocean, whereas the service areas have been stowed neatly within the walls.

The most surprising feature of this house is the pentagonal-shaped roof made of a mixture of steel and wooden beams, defined by the designer as being “somewhat bold”, but full of delicately crafted details.