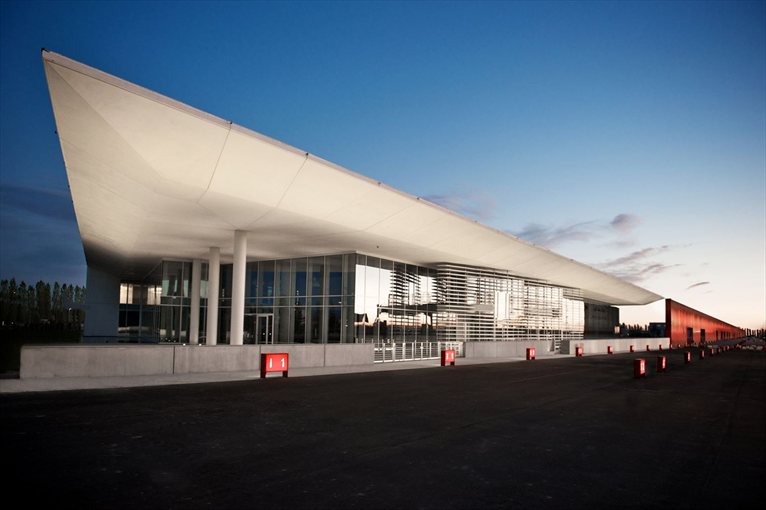 Italcementi Group's new Italcementi i.lab designed by Richard Meier, was officially opened last Monday at Bergamo in the presence of group representatives (18 countries represented) and the Italian Minister of the Environment Corrado Clini.

The building appears as a white “arrow”, a true landmark recognisable on the territory at one end of Jean Nouvel's famous “Kilometro Rosso”, visible from the motorway. In this great "machine for industrial research", which covers an area of 23,000 square metres, concrete becomes the element generating sustainable architecture and intelligent buildings.

Meier's project stands out for its detailed work on each component with careful attention paid to the quality of the large spaces which link people and functions.

Richard Meier imagined i.lab as an articulated structure two stories high above ground with three underground levels. i.lab re-proposes and underlines the “V” shape of the area as if it were to accentuate – in its layout in two wings looking onto a central courtyard – its opening towards the agricultural ornamental field i.land, especially created in the external area.

The great suspended point which covers and protects the entrance creates a large double height covered external square which continues naturally in the glazed access atrium which in turn leads into the two wings of the building.

The first wing of the “V”, parallel to the motorway, accommodates laboratories and offices. The second wing on the ground floor accommodates a large conference room which can seat up to 240 people, while on the first floor there are meeting rooms.

i.lab is characterised by many technical and industrial innovations. Amongst these: the glazing system which characterises the structure and which creates a contrasting effect between the solidity of the concrete and the transparent weightlessness of the glass.