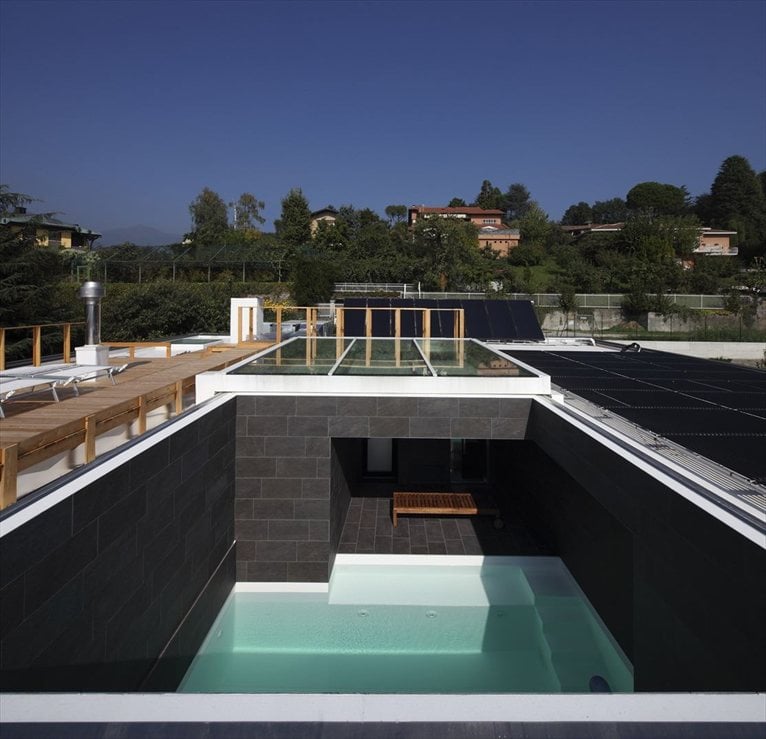 Restructuring existing building heritage is one of the themes that designers will have to be involved with more frequently in the next few years. In this case the renovation of a Two-family house, built at the end of the 1970's on the hills surrounding the town of Erba, provided the opportunity for architects Marco Castelletti and Patrizia Viganò to rethink the building not only in terms of energy, by adopting state-of-the-art technologies to keep down consumption, but above all to give it a new architectural appearance.

The house was originally designed with traditional materials, the random aggregation of the rooms of two apartments had generated an articulated and confused roof with a sequence of pitches and sheets.

The purpose of the restructuring was to find a solution to make the two units completely independent both in terms of entrances and underground garages and to reorganise the internal distribution of houses, recovering the area under the roof. After having demolished the pitched roof, the existing perimeter walls were raised to provide an attic floor and create a flat roof.

The most external perimeter walls and the containing wall at the rear of the house limit the new roof. It creates a great square flat area to which vertical metal structures are fixed. They support the wooden cladding which surrounds all the sides of the house and enclose it in a stereo metric volume.

The dual skin made up of the walls of the house and the external wooden grating creates double height spaces which create a transition between the internal rooms of the house and the external garden. This operation has made it possible to rethink the development of the house concept by imagining it as a single square plan solid volume, with the porticoes and balconies removed. This conception is made evident by the colour contrast between the black walls in contact with the perimeter of the external square of the wooden grating and the white background walls of the porticoes and balconies.

The restructuring preserves the distinction between the smaller apartment to the east and the larger one to the west, organised on three levels including the basement, connected by a system of vertical access ways consisting of a spiral staircase and a lift. The houses have entrances at opposite ends, they are organised with the living areas south on the ground floor and the sleeping areas to the north and upstairs.

Upstairs on the first floor above the kitchen of the biggest apartment, which occupies the space that was the open hall of the entrance to the original house, a “flooded room” has been suspended. It is closed in by perimeter walls and covered by a sliding glass skylight which is opened on sunny days leaving it open to the sky. This unexpected and hidden environment remains at the centre of the house and can be accessed at the first floor from both units.

The flooded room, which has a small Turkish bath, leads to the flat roof from a terrace which looks out on the portico behind the house. The flat roof contains the photovoltaic system and solar panels, the sliding window of the swimming pool and a wooden solarium from which there is a panoramic view southwards over the lakes.

The transformation has created a new house, where comfort and well-being can be perceived in the various rooms overlooking the garden and the landscape and culminate with regeneration and alienation in the floating water room where you are in direct contact with the sky and its infinite variations connected to the passing of days and seasons.