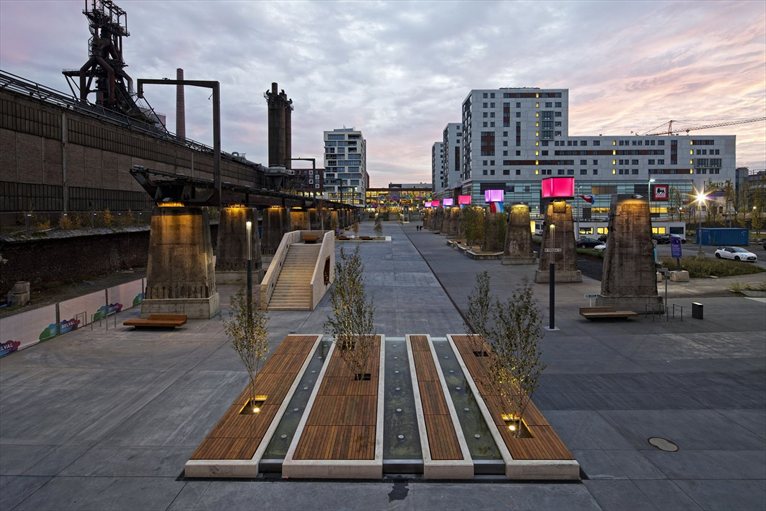 Austrian architects AllesWirdGut have found a novel purpose for a disused steelworks in the second largest city in Luxembourg, Esch-sur-Alzette, on the border with France.

They have created LUX, an excellent urban regeneration project carried out by the young Viennese architectural office who converted the remains of an industrial building on the edge of the city into a public square, re-using part of the original structure.

Thanks to a stimulating spatial connection, with intelligent routes and original overlays and functional integrations, the project uses the potential of the place without being overwhelmed by it, on the contrary it provides a highly personal re-interpretation.

More often than not when an industrial site is just cleared it is left in a state of abandon again. Indeed, they are already definitively modified areas where attention can no longer be focussed on the naturalistic setting alone.

Instead of beating around a bush of consolatory restoration of nature that has been so radically modified, attention has been focussed on the industrial landscape in its heavily modified form.

The name of the architectural office, AllesWirdGut (“everything will be alright”) may represent the manifesto of this young and unconventional way of dealing with such a thorny matter, full of stereotypes and clichés.

Thinking positive, in designing the post-industrial city, is, however, obviously not enough. A certain shamelessness, alert and full of energy, though may make it easier to cope with the complex nature of urban areas, providing truly sustainable concepts.

Apart from environmental and economic sustainability, which are fundamental but not sufficient, the designers have attempted to capture the many possibilities of use which make architecture an object of varied use and a place to live. This is an excellent but more subtle example of sustainable use.