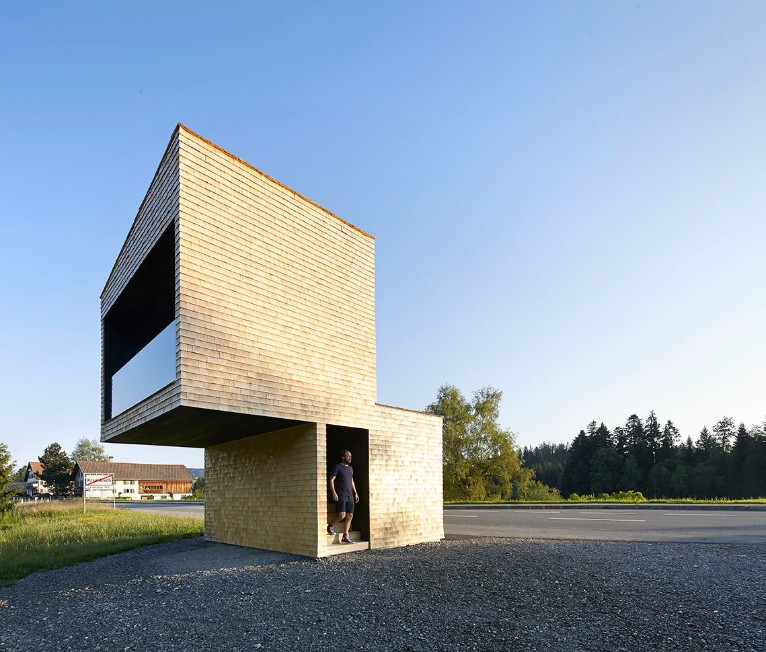 ARCHITECTURE _ Vorarlberg (Austria) has an international reputation as a region for architecture.This year to increase even more his prestige, the Council set in the project BUS:STOP Krumbach.

Seven international architects’ practices have been invited to design small bus shelters for our village of Krumbach.

The architects have engaged in a dialogue with the people, the landscape, the local culture of building and the traditions of skilled trades in the Bregenzerwald. With the help of architects from the region and skilled local craftspeople small functional buildings in public space are created. 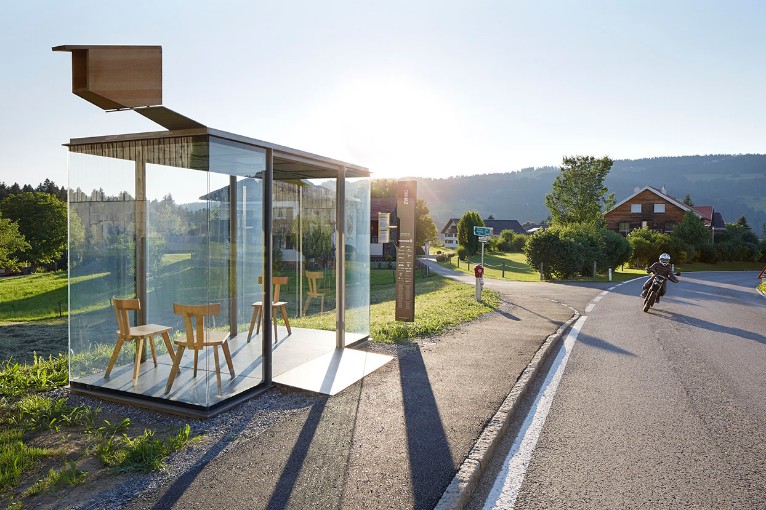 Smiljan Radić was clearly inspired by the handcraft and traditions in the Bregenzerwald. The result: a design with references to the Bregenzerwald house “parlour”. Radic transfers the intimacy to the exposed situation of a bus stop. A cut-out piece of “parlour” placed in the landscape, disengaged from the context of the interior. A precisely detailed glass pavilion with a coffered ceiling of black concrete. Rural wooden chairs are provided as seating. A bird-house provides a playful aspect that both attracts attention and provides distraction, at one and the same time. 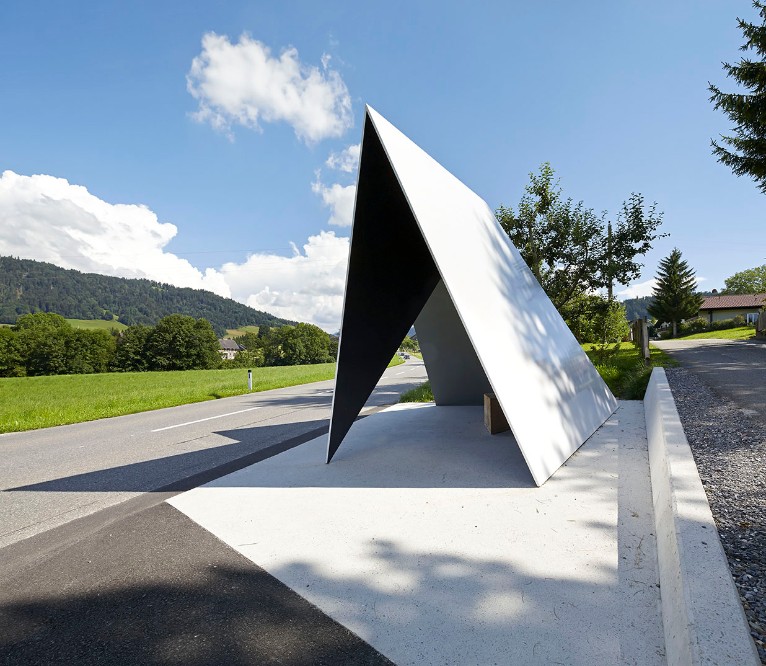 dvvt – Jan De Vylder, Inge Vinck and Jo Taillieu are among the main protagonists of the Flemish architecture scene. dvvt made their site visit on their way back to Belgium from the furniture fair in Milan, by breaking their journey in Krumbach. Crossing Alpine passes in a car made a strong impression on them. And then there was a chance encounter with a picture on a wall somewhere in Ghent. The geometric abstraction of a triangular form could have been made by Sol Lewitt. But at the centre of it was an irritation: a handyman had mounted a doorbell in this wall painting. Disrespectful. Now we look at the location of the BUS:STOP: an acute- angled situation, where three directions meet. And dvvt bring together their impressions and influences to make an object precisely for this place. A poetic act of folding triangular surfaces. A narrative about the place, about Sol Lewitt and about the Alps – called “April”. 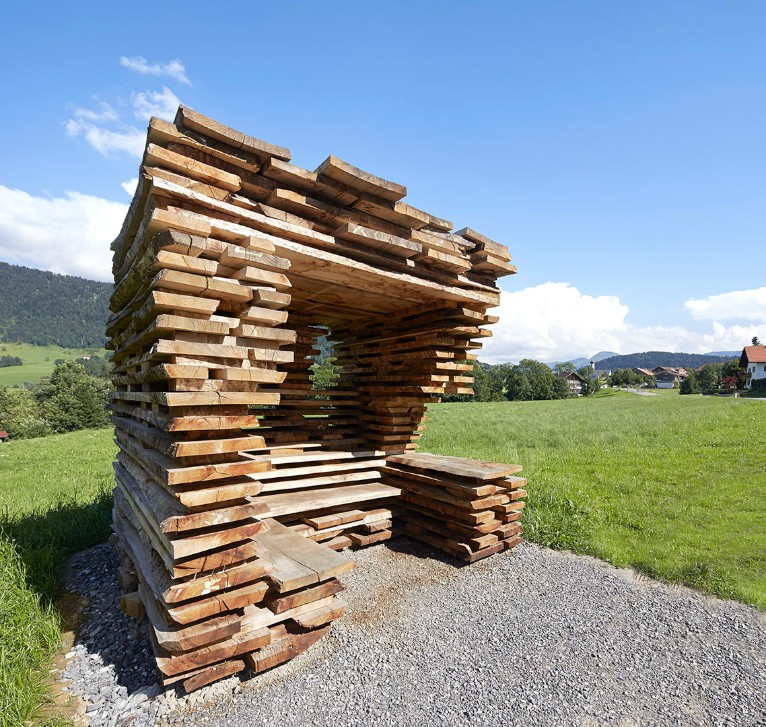 Ensamble Studio sees itself also as a research institute for architecture. Time and time again they test materials by taking them to their limits. Ensamble Studio were fascinated by the elementary quality of rough, untreated oak planks and they way they are stacked to dry in timber workshops in the Bregenzerwald. The challenge was to make this into a spatial situation for the BUS:STOP. Just by layering the rough planks, arranged and positioned in way that produced a space that was both protected and open. The architects regard it as most important that the oak planks should remain untreated, their smell and the process of ageing makes the place somewhere specific. 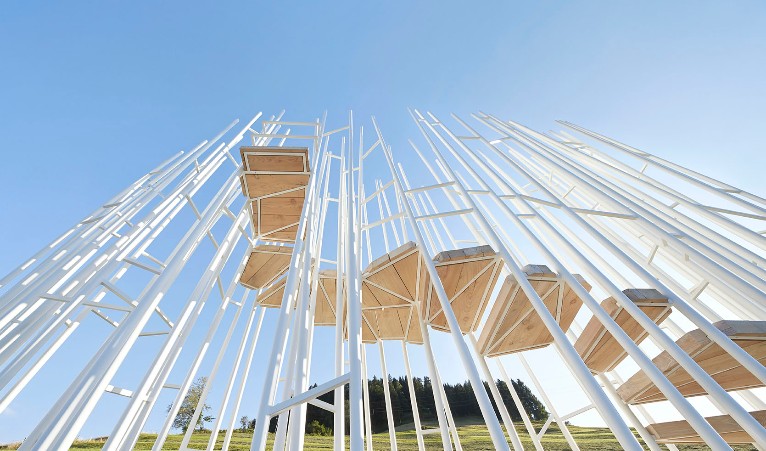 Sou Fujimoto’s architecture derives its strength from the dream of a new unity of architecture and nature. Here architecture should not adapt itself to nature, should not imitate it but through its own geometric laws ensure for nature the space it deserves. With this philosophical approach architecture no longer has a protecting function. It is an open dialogue with nature. For this Sou Fujimoto offers spatial frames as possible forms for interaction. A further development of this concept is his BUS:STOP for Krumbach. A “wood” of thin, steel rods. In this open structure a staircase winds upwards. No, this BUS:STOP offers no protection against the weather, but instead opens up new dimensions in the perception of place, space and nature. 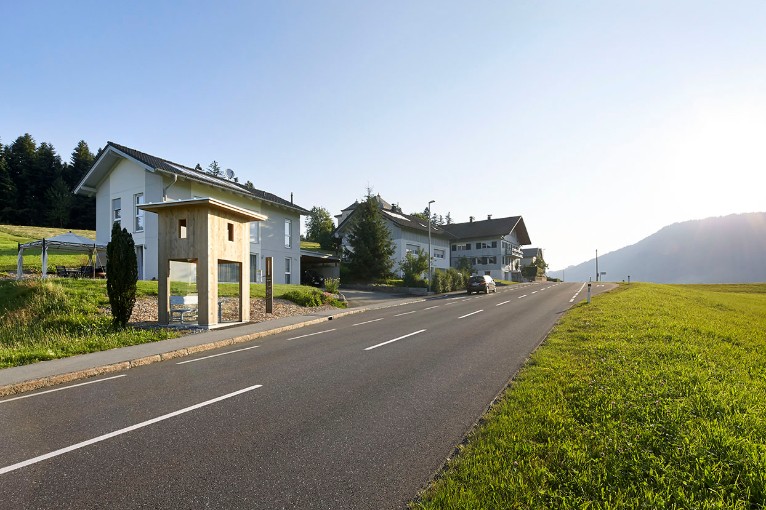 Alexander Brodsky was confronted with a difficult site for his BUS:STOP. A small left-over area at the edge of a site occupied by a neat single-family house stands. But he reacts in a fundamental and sovereign way to this restriction and places a radically simple but precisely built wooden tower on the site. At the same time his tower has a striking archaic quality. Openings on all sides, glazed on three of them. And then there is the “first floor” with its small unglazed windows. Here the wind blows and birds can fly through. With a table and bench Alexander Brodsky provides a relaxed atmosphere to wait in, if the bus should happen to be late. 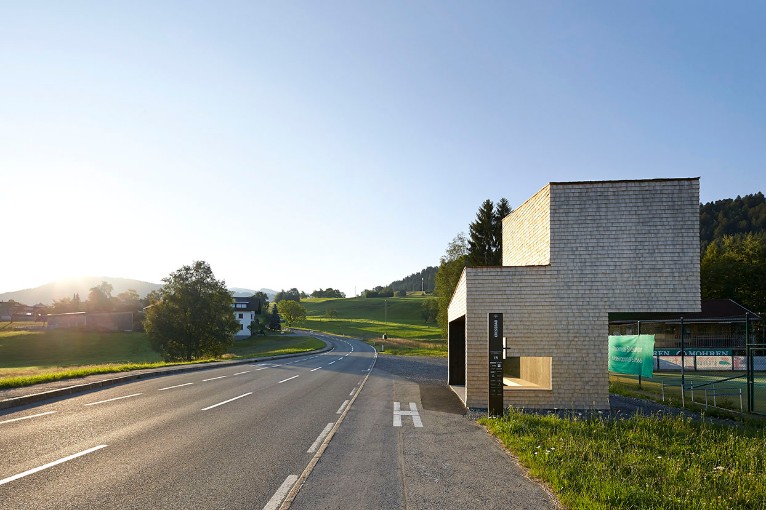 Rintala Eggertsson Architects move along the boundaries between architecture, design and art. Their “objects” respond to the place with densification to create a special narrative. This is the background to their decision to use the tennis-court site. It was only here that they could augment the BUS:STOP with an additional social function. It is both a shelter for people waiting for the bus and a small, metaphorical, yet entirely functional, spectator stand for the tennis courts. Very reduced and traditional, timber-built, shingle-clad. The special aspect of the interpretation is the combination of need and possibility. 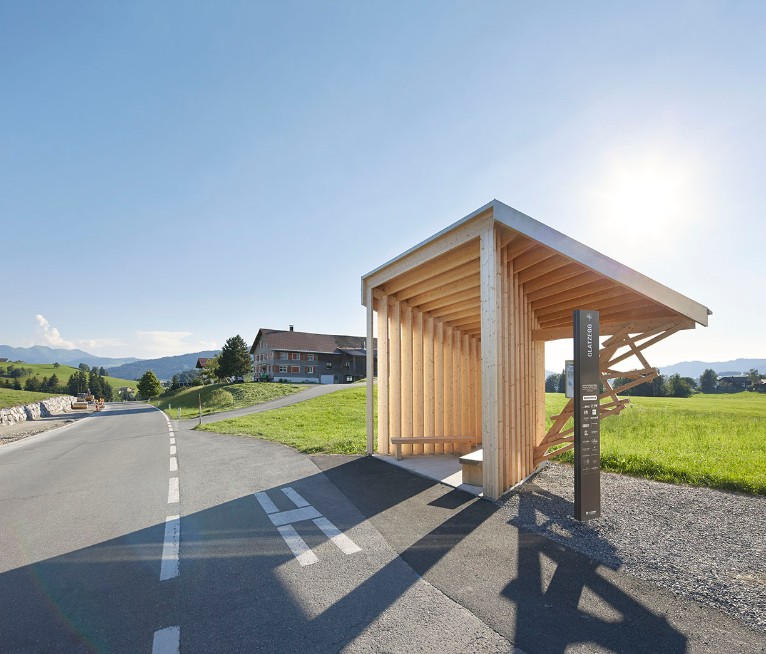 Pritzker prizewinners Wang Shu and Lu Wenyu from Hangzhou, China addressed the special location of this BUS:STOP with an unobstructed view in both directions. They designed a camera obscura, a conical space that opens to the street and, with a window in the rear wall, frames the visual axis to the mountains. In this way they created a space with a special, focused perception of the landscape, which in all their projects is always more important than the buildings themselves.

Find out more in the map below 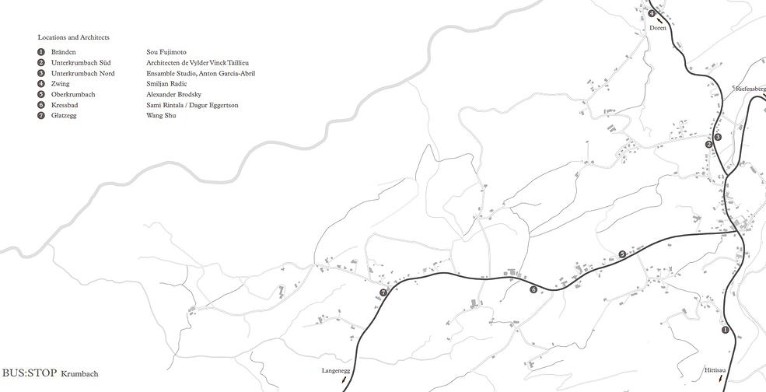