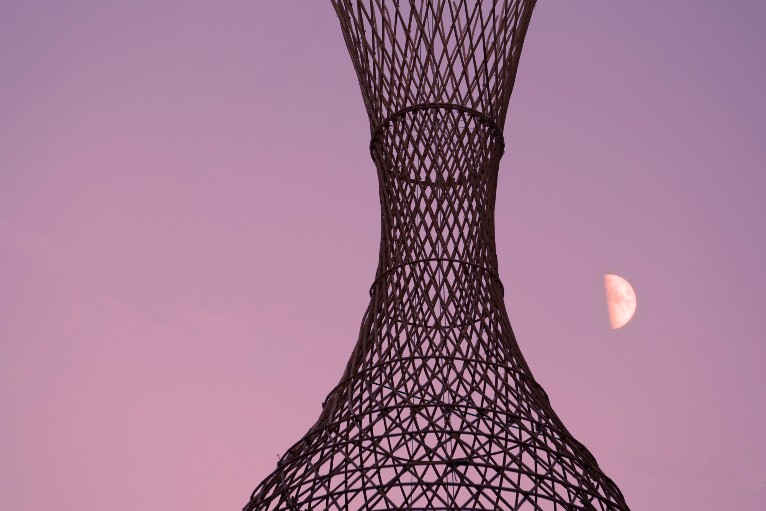 Can an idea, a project, change habits and solve a global crisis such as drinking water? An Italian architect has raised the issue: Arturo Vittori, the architect founder of Architecture and Vision, during his first trip in Ethiopia. With a “spatial” know-how, gained from projects in collaboration with government agencies such as ESA, NASA ... and so confronting hostile landscapes and designing with what the region can offer.

In a historical moment characterized by economic, environmental and social crisis, so here is the return of the self-made: the handicraft and the tradition of "home-made" regain importance. This is an alternative to the capitalist model that has not been able to reconcile human activities with nature, the activity of the individual with those of society. As Vittori says: "The self-made is fundamental when designing a base for the Moon or on Mars. For the lunar settlements of first generation, man will be confronted with a very hostile and extreme environment with few but precious available resources. When the first astronauts and the first robots will arrive, they will have to approach the problem with a self-made, they will have to do everything by themselves. In a way, go to places like Ethiopia is a bit like going to the Moon."

The Warka Water, the tower that captures drinking water from the air, was created just as a self-made in his first voyage, in 2012. In the Ethiopia countryside, Vittori comes into contact with the real crisis of the shortage of drinking water. A workshop was organized in situ in collaboration with the University of Architecture in Addis Ababa: the study of possible solutions and of materials to be used begins. A clash with the genius loci, where the most important resources were and are human... many people able and willing to do.

The testing scenery is the north-east Ethiopia. A landscape of subsistence agriculture, characterized by plateaus that reach 5,000 m with villages scattered throughout the territory. Here, the process of collecting water by condensation can happen thanks to the climatic conditions, combining with the crisis and with the practical need of drinking water. Once the manpower and low cost materials (Ethiopia is the leading producer of bamboo in Africa) were acquired and the place has been defined (Awra Amba, a small village of a few hundred inhabitants, whose economy is based on craft textile), the concept of warka begins to take shape in a prototype scale of 1:10.

But what is the Warka? What does it do? And why WarkaWater?

Everything starts from a small insect, the stenocara. The Namib desert beetle, one of the few creatures that can survive in deserts. During the day, it lives in the sand, "a bit as you would do on the moon, surviving in extreme conditions protected from regolith, the lunar sand". At night, when temperatures drop, it comes out: it lifts the hind legs so tilting the upper shell (approximately 35°). Therefore, during the night, it collects water for condensation on its body positioned at the proper angle for allowing water to slide forward and to be assimilated. The accumulated water is rich in iodine and elements that allow the stenocara to survive for seven to eight months without eating.

The stenocara, and in particular its exoskeleton, was studied by British researchers: such study has allowed the Ministry of Defence of the United Kingdom to patent a special fabric, the same used for the Warka. This fabric has been used for special military suits that are currently being tested to provide water supplies to the Her Majesty’s army in the desert. Indeed as the skin of the beetle, the water-resistant fabric does not absorb water, on the contrary, it allows the water flows out.

"This insect has been the inspiration... if we could do with our buildings, with our homes and skyscrapers a tenth of what the stenocara does, the water consumption would be solved... with a little of intelligence and without high technology, just by discovering the traditions of some populations who use this approach in several ways".

Returned from Addis Ababa with clear ideas about the objectives of the concept, Vittori proposes a second workshop: this time at the IUAV in Venice, with the desire to make a 1:1 scale model. Here, with the help of software that allow a parametric and algorithmic design approach, the Warka evolves. A 9 m high tower: it consists of a lattice structure with triangular mesh and made ​of natural materials typical of Ethiopia such as bamboo and bulrush. With a weight of only 60 kg, the tower is composed of 5 modules that are installed from the bottom upwards: these modules can be lifted and assembled by 4 villagers without the need for scaffolding. Inside: the special fabric that can collect drinking water from the air through condensation and a receptacle at the base. 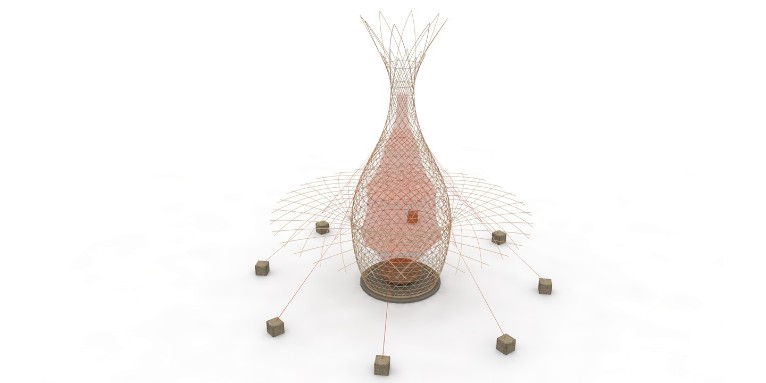 In “Ethiopian” climatic conditions, where mild temperatures characterize the day and the thermal excursion is very strong at night, the temperature difference between air and tissue that the air in contact with the fabric condenses and releases water, element anyway present in the air in a more or less high percentage. In the morning, up to 100 liters of drinking water can be found under the. Drinking water useful to cover the needs of a family.

Vittori describes villages where women and children depart barefoot in the morning to go looking for water. Walking for hours in the sun, they arrive in places with extreme conditions, where the water is anything but drinking. The scene is repeated throughout the day. To do this, the village children do not study, they do not receive instruction: they are sent in search of water until sunset, at which time, in the village, life stops due to lack of electricity. 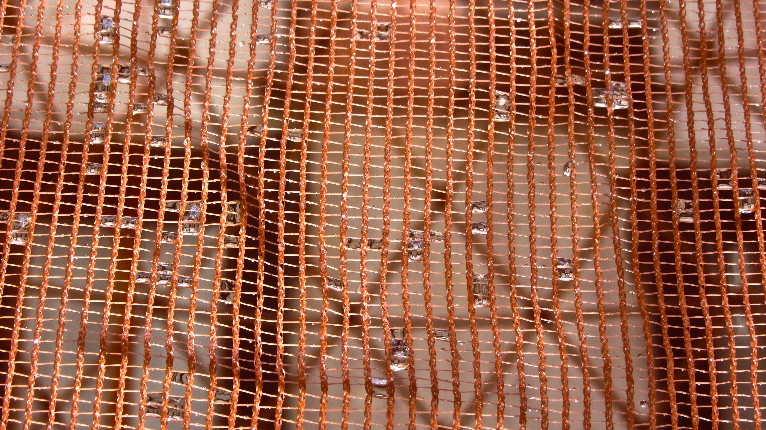 The objective of WarkaEnergy and WarkaPeople (variants or rather further steps of the project) is to become in a sense the center of the village. Around these structures, with the help of small photovoltaic cells and canopy, even in the evening, children can meet, read, study and play...

"The Warka then becomes a resource center."

Not coincidentally, the name of Warka is taken from a particular fig tree native to Ethiopia. A giant wild fig tree traditionally used for public gatherings and school education.

“In short, an urban space that for our Italian culture is equivalent to the square."

Teach these people a method, a resource... will trigger a culture of doing: a culture already in place but once fully accepted by the inhabitants of these territories, it will become a knowledge to be passed on. We are talking about a structure that performs a very important function and if it is integrated with the life of a village, it will have a strong impact on the anthropological level ... "Now it is impossible to define what will happen, but certainly we know that once inhabitants have water, the children can study and the women do not have to turn away... an upheaval that has occurred already in the society"... a sort of civilization.

Then the Warka was replicated again: this time at the 13th International Architecture Exhibition of the Venice Biennale. For Vittori this is the opportunity to promote the project beyond national borders so as to reach the exhibition spaces of the "Cité des Sciences et de l'industries" in the Parc de la Villette in Paris. In 2013 the warka was installed at MAXXI for the exhibition Erasmus Effect. 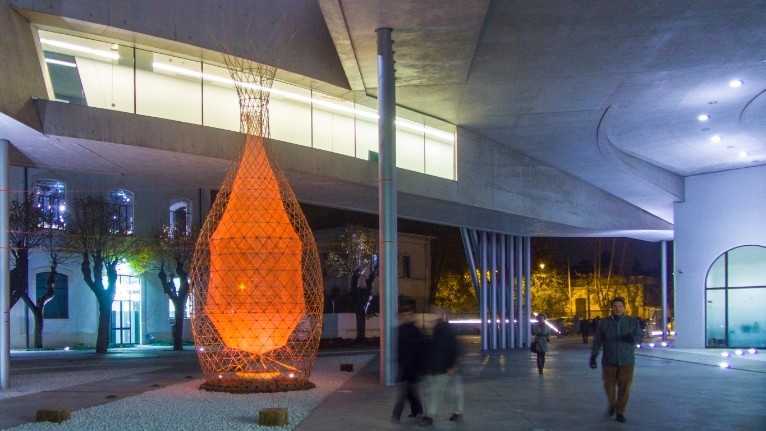 Currently the Studio and the Partnerships are working for the Warka Water 2. The new Warka expands the possibility to collect rainwater, dew and fog. The conic shape improves stability and optimizes packaging and transportation. The 'crown' is designed to keep the birds away. 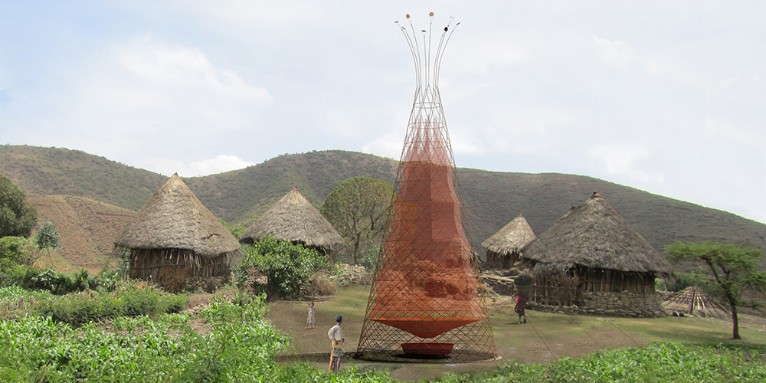