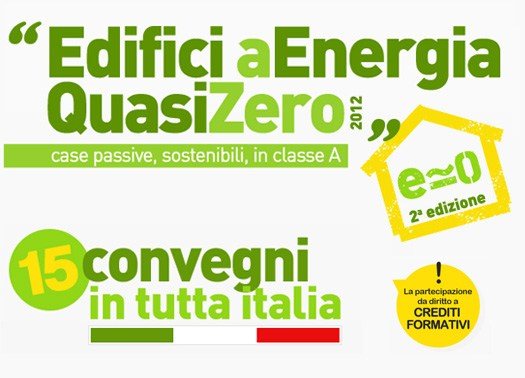 The national Tour “Edifici a Energia Quasi Zero” or Nearly Zero-Energy Buildings is back with its second edition starting today March 19th at 3 pm (CET) with a conference in the Aula Magna Attilio Alto in the Polytechnic of Bari.

The Apulian stage of the event promoted by Edilportale and Archiportale, on energy efficiency and sustainability will mark the beginning of the road show around Italy with a further 14 stages in various regions of Italy.

The great success of the first edition, which involved thousands of participants and experts in the sector, begins with a series of meetings and will continue until June 6th with the last stage to be held in Parma.

The Big news for the Tour 2012 will be participation in the sixth edition of the Sustainable Energy Europe Awards 2012, promoted by the European Commission (http://eusew.eu/awards-competition ) for the most outstanding, ambitious and innovative projects in the field of energy efficiency and use of renewable resources.

The stages of Rome, Perugia and Florence, on the other hand, come within the calendar of the European Solar Days 2012, the European campaign on solar energy which gets takes place from 1st to 13th May.

This afternoon, after the introductory speeches of the Dean of the Polytechnic University Nicola Costantino and of Giambattista De Tommasi, Civil and Environmental Engineering lecturer, Angela Barbanente, Councillor for Territorial Quality, Antonio Lumicisi of the Environment Ministry and other personalities from the sector of energy efficiency will also speak.