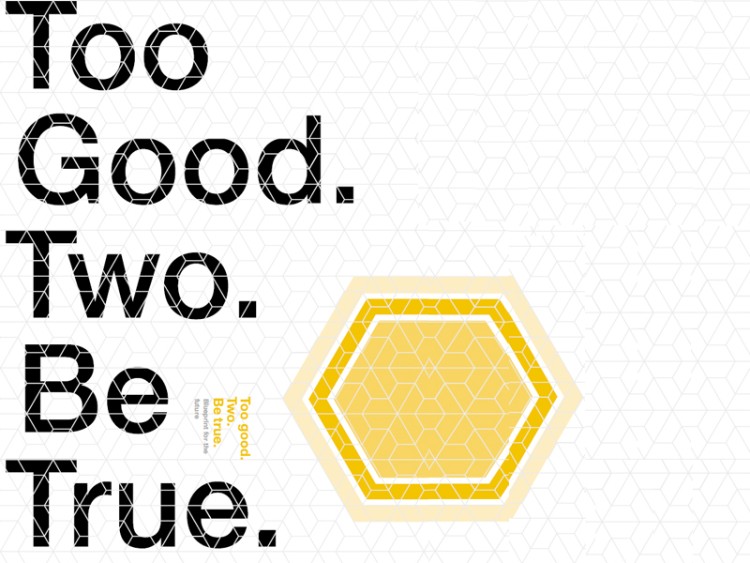 The 2014 Architecture Biennale in Venice revolves around the hundred year period 1914-2014 in which a technological and globalised modern world has come about. In this period, helped by the two world wars, the dream of flying became a reality for everybody. In 1914 there were no airports, just airfields for taking off and landing and hangars for sheltering the planes. 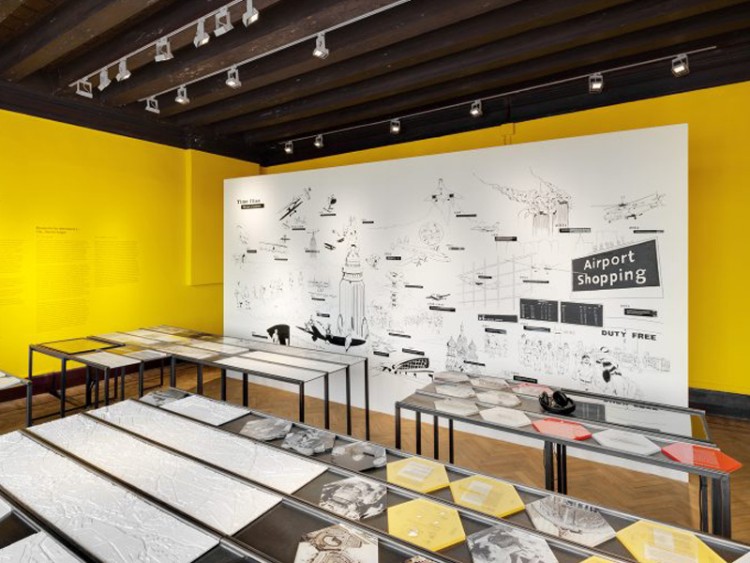 gmp Architekten's exhibition at the Venice Architecture Bienniale called “Too Good. Two. Be True.” focuses on the first airports of globalised architecture created for the early fliers (Berlin-Tegel) which was “Too Good” for the early needs. Then more recently GMP has been involved in the yet to be opened airport number “Two” in Berlin, the Berlin-Brandenburg airport named after Willy Brandt, the former Mayor of West Berlin who did so much to try and reconcile West Germany with the Soviet countries. The common element linking both airports is to “Be True” to their users, the passengers... hence the name of the exhibition. 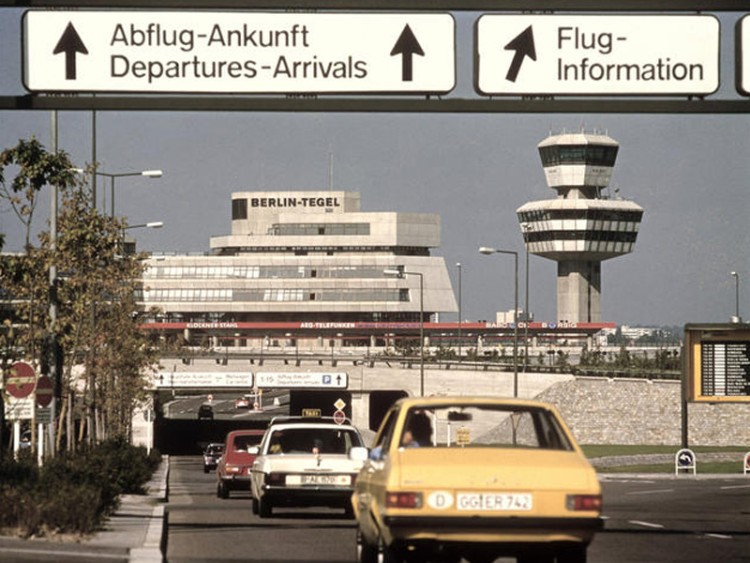 The tale’s moral is to remember the – positive! – future-oriented origins of globalised architecture in order to find the right responses to its – often negative! – repercussions. 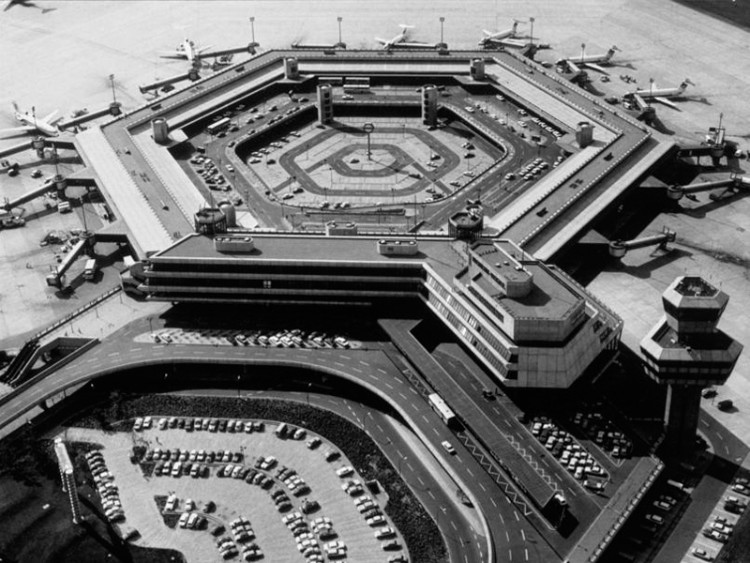 The work on the Berlin-Tegel Airport began in 1965 (almost exactly halfway through the hundred year period this year's Biennale focuses on) with an ideas competition. The briefing stipulated a design that “allows for stepped enlargement of the airport and later use of the development for other purposes”. 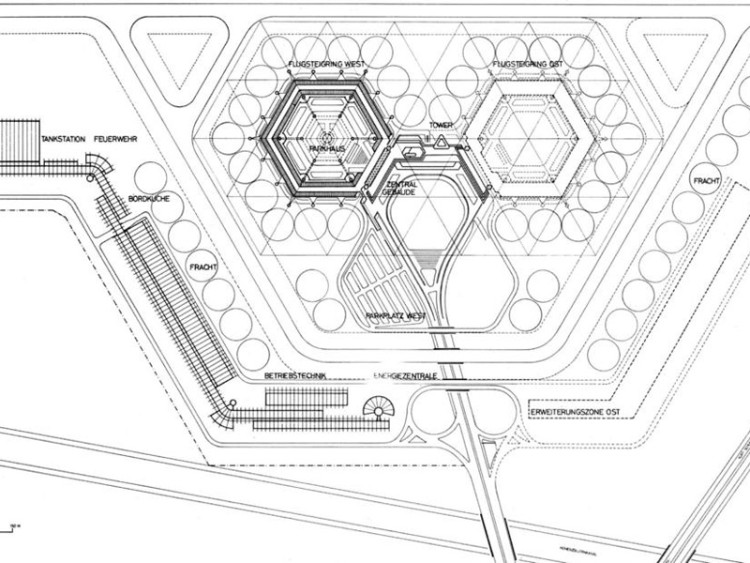 Meinhard von Gerkan, Volkwin Marg and Klaus Nickels, at the time freshly graduated young architects, developed a geometric modular principle. A hexagonal grid of equilateral triangles with edge lengths of ten metres. Likewise, all construction elements such as ceilings, floors, staircases and fixtures were developed with the same geometric pattern, which almost gave the development its own corporate design. 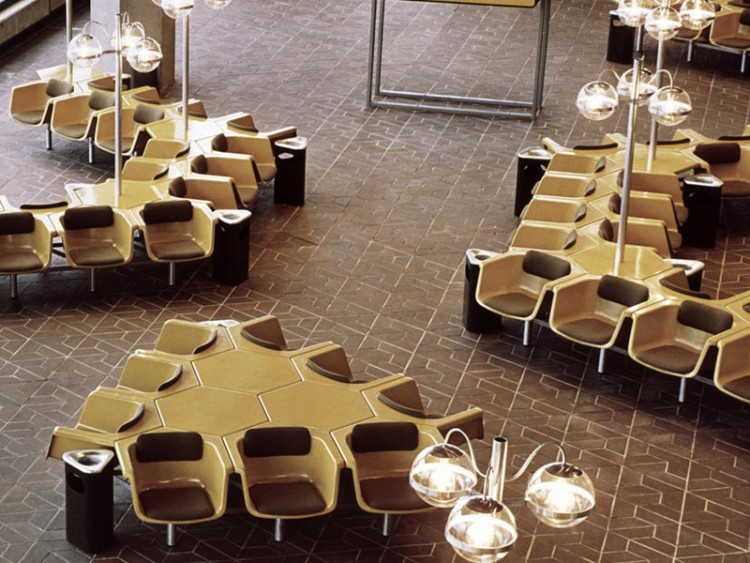 The hexagonal terminal was arranged over two floors with an atrium and roof terrace, and served the decentralised direct handling of passengers and aeroplanes, giving rise to the term “airport of short distances”. 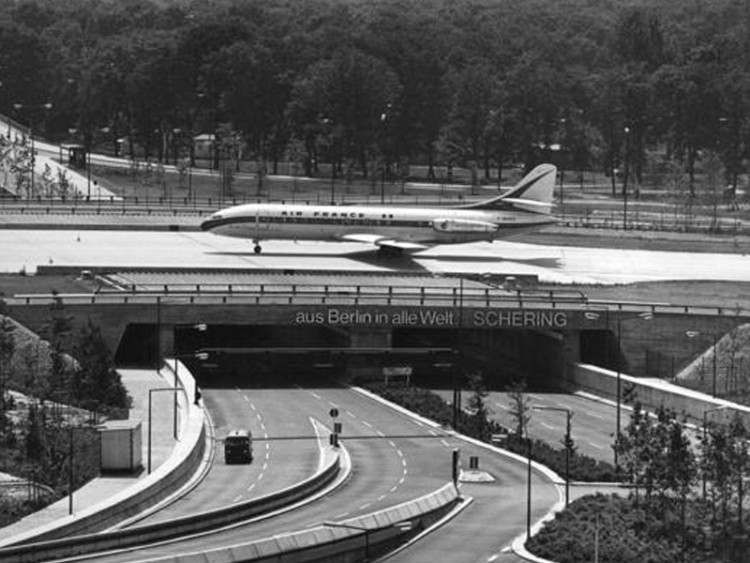 The idea of the drive-in airport was systematically applied so that it became possible to drive into the interior of the terminal, directly to the passengers' respective check-in area. This meant that arrival at the airport and entering the plane was nearly one and the same thing. 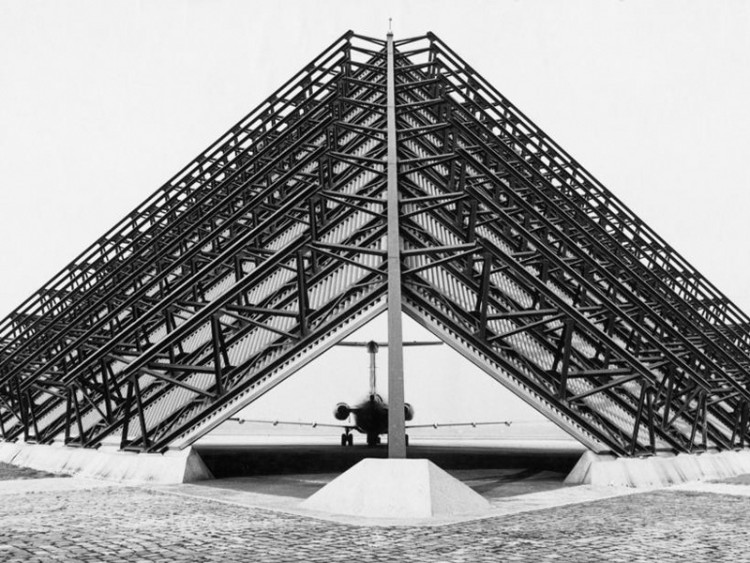 There was not even 50 metres between the two. There were a total of 14 positions where aeroplanes could be brought directly to the building in nose-in position, enabling passengers to board or alight. 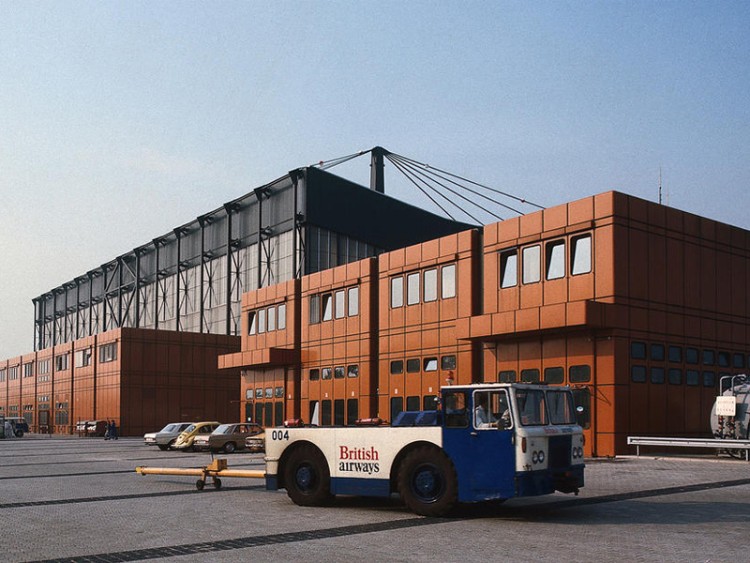 Departure and arrival were on the same level. The basic design feature was selected to be fair-faced concrete. This rather technical/rational image of the building is contrasted by playful image elements and an expressive colour concept. 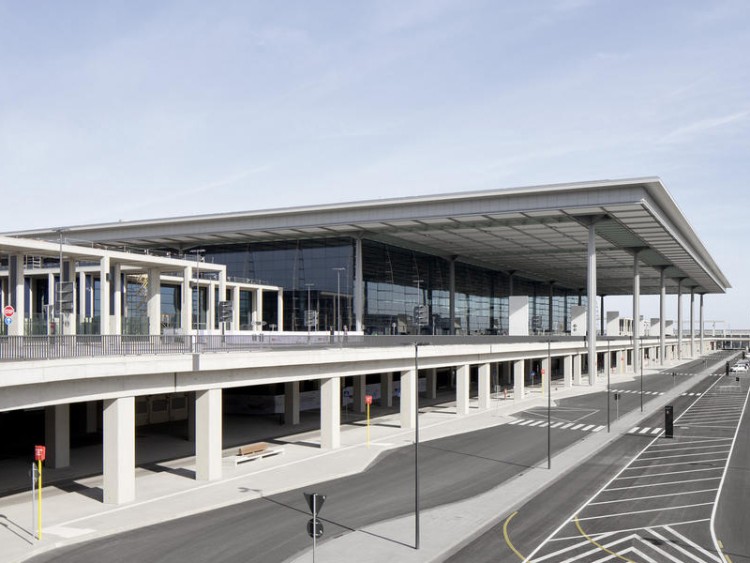 The design for the Berlin Brandenburg Willy Brandt Airport (BER) began towards the end of the period which the Venice Biennale focuses on. The winner of a design competition in 1998, it was intended to create a functional and organisational unit encompassing all elements of a modern airport. 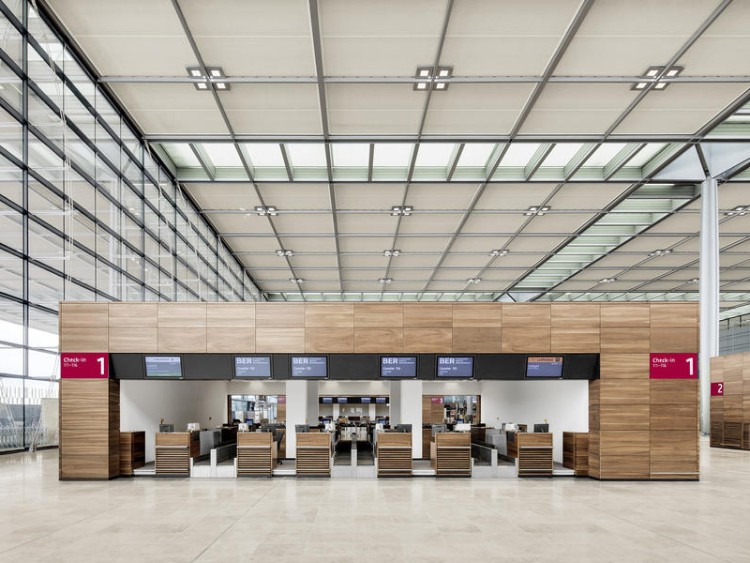 Thirty years after Tegel, the world had changed enormously as had Germany in general and Berlin specifically. New airports no longer had the passenger at the top of their list, now security and consumerism had become the new Gods. Now it's a question of keeping the passengers inside the terminal as long as possible inviting them to consume. However, the new Willy Brandt airport will not abandon the idea of short distances thanks to the grid layout, making it possible to interchange with other transport modes in the same building providing the shortest routes compared to other European airports. 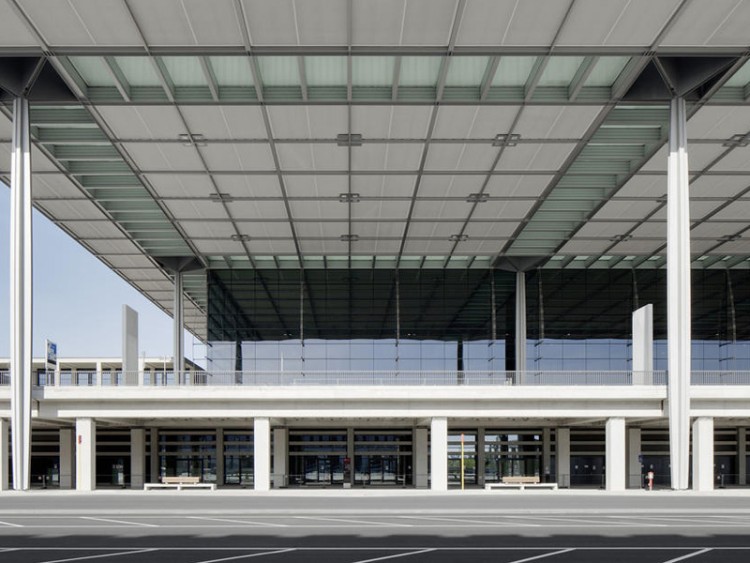 The terminal is subdivided into two levels. The departure lounge with its generous, light-flooded design forms the main level which is roofed over by a filigree construction in steel and glass. The U-shaped layout of the piers allows for a maximum number of plane positions near the building. It is also possible to extend the north and south piers. The terminal, the piers and Airport City with its offices and hotels are located between the two existing parallel take-off and landing runways laid out from east to west in the main wind direction. This is also the symmetrical axis of the airport with the existing railway line and road access to the entire airport facility. Along this axis lies the central entrance area – the main hall. 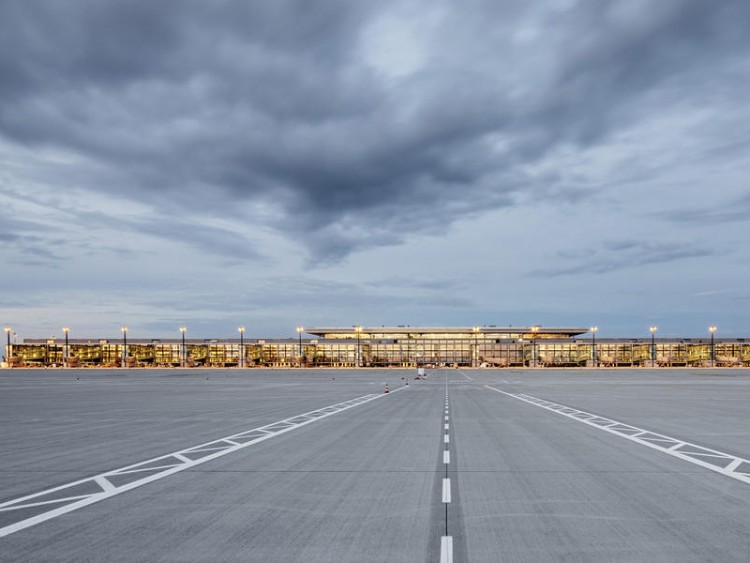 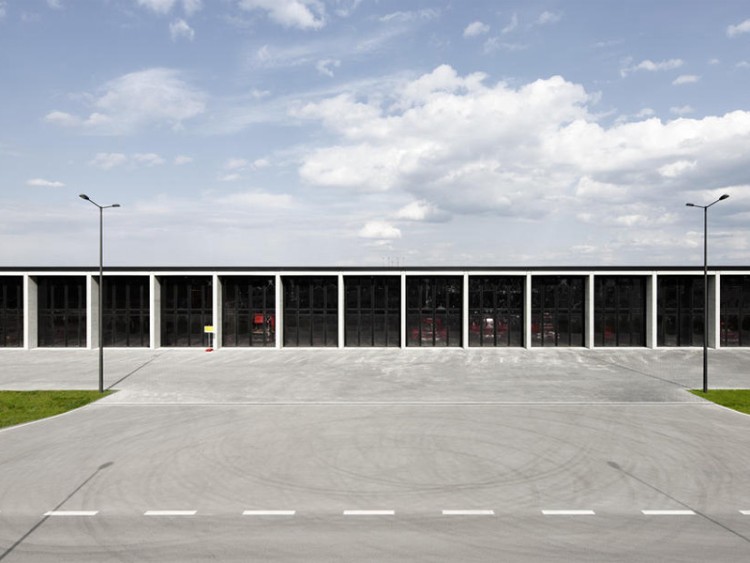 All elements – including the passenger terminal, Airport City, the waiting areas to the west and the service and cargo areas to the east – are laid out within the axial arrangement and form an architectural as well as a functional unit. 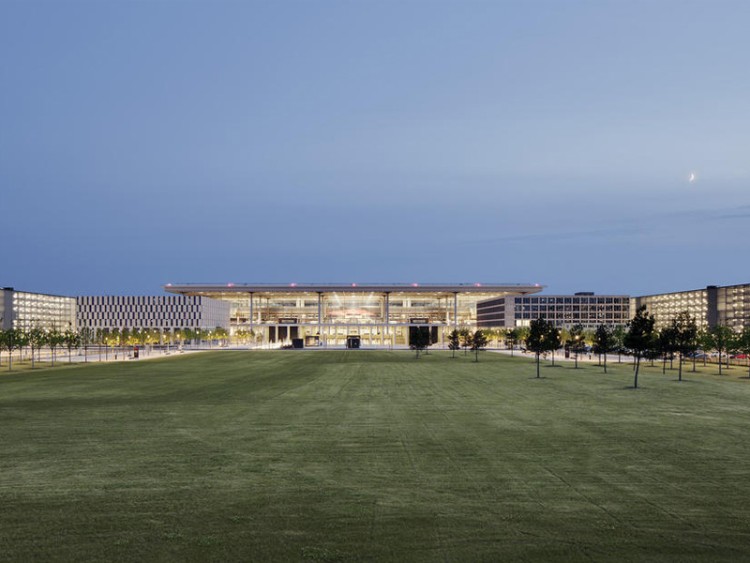 The ideal that both Tegel and Berlin Brandenburg pursue is not least an ideal of truthfulness. Both airports take the passengers seriously rather than treating them merely as a consumer or a security risk. To do that, they stay true to what is essential. Increased complexity does not invalidate this ideal. On the contrary, it makes it more important than ever before.