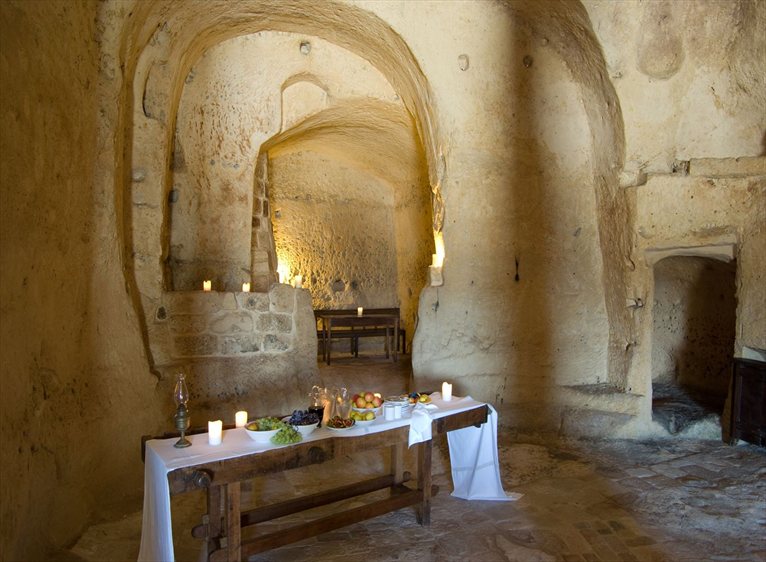 Le Grotte della Civita in the Sassi area of Matera in Puglia in Southern Italy is a hotel project created to provide a one-off hospitality experience, unclassifiable in “stars” and far from any traditional concept of luxury. It has been described by the New York Times as one of the most unusual destinations in the world, the Times included it in its list of the ten most beautiful hotels in the world and for Tatler Condé Nast it is one of the hundred most beautiful hotels on the planet.

In 1993 Unesco declared the Sassi of Matera World Heritage, thus making it possible to exploit the exceptional and unique nature of these places, where the dwellings blend in with the rock or open into large grottoes. Some of these had been turned into Rupestrian Churches in the Dark Ages by Christian Monks, and these monuments still retain their unspoilt beauty after centuries.

Sextantio Le Grotte della Civita is located in the oldest part of the town called La Cività in the caves overlooking the river Gravina, opposite the dramatic scenery of the Murgia Park and its Rupestrian Churches. This one-off hotel has eighteen rooms inside enormous caves, characterised by extreme preservation and recovery, only using recovered materials, from the flooring to the furniture, even the linen comes from unused brides' trousseaux.

The project was devised by Daniele Khilgren and Margareta Isabel Berg, artistic directors, with the collaboration of the studio Spa-progetti of Matera.

The structure whose overall capacity is forty guests, is developed over three levels, connected by a staircase and a system of terraces which provide independent access to the individual rooms. All the external environments including the large entrance terrace, a garden with plants and flowers typical of the Murgia Hills and a vegetable garden overlook the gorge excavated by the river Gravina, overlooking the dramatic scenery of the Murgia Park and its Rupestrian Churches.

The caves have been restored and furnished by taking preservation recovery to its extreme. The furniture, with its essential, plain look, is made of centuries-old recovered wood using ancient craft techniques; the linen, coming from unused early 20th century wedding dowries, has all been hand stitched. In line with the principles inspiring the project, none of the rooms has a television or minibar. However, each grotto has a modern heating system with radiant floor panels and an Internet connection.

Guests, to the grotto, have a non-stop supply of fresh water, fresh fruit of the season, candles and essential oils of the Murgia Hills scenting the environment. Breakfast is served in the ancient Rupestrian Church dating back to the 13th Century and includes cakes, biscuits, jam, cheese and cold meats produced by a local organic farm. In the evening guests can sit in front of the enormous fireplace carved out of the tuff stone and taste genuine Lucano products and wines.