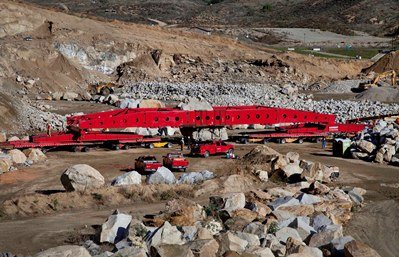 Tomorrow (February 28 2012) Michael Heizer's tear-shape lump of granite, which is part of his new and one of the largest environmental art creations ever placed in an urban setting, will begin its journey to the Los Angeles County Museum of Art. The Sisyphean journey (although hopefully it won't last as long as the mythological Greek king's journey!) begins from the quarry where the artist finally found the boulder he was looking for to complete his 'Levitated Mass' project. The boulder is the size of a two-storey building, weighing 340 tons and will be transported by a 196 wheel 44 axle transport vehicle. Up to 60 people will be involved in the monumental task. The whole trip has been made possible thanks to the sponsorship of Hanjin Shipping.

The size of the boulder (it covers almost three freeway lanes and is as long as a football pitch) has made it necessary for the route to be meticulously planned to avoid overhead obstacles and the vehicle will only travel for a few hours each night to disrupt traffic as little as possible.

When it reaches its destination (it is expected to arrive in the early hours of the morning on 10th March), it will straddle the 456 ft long trench which the artist has already built on the campus of the museum behind the Resnick Exhibition Pavilion. When the work is completed and latest projections suggest that it might be in November, visitors will be able to walk along the trench under the suspended monolithic boulder, thus having the rare opportunity of seeing one of Heizer's works from close up.

You can follow the journey of the boulder at http://www.lacma.org/levitated-mass-map