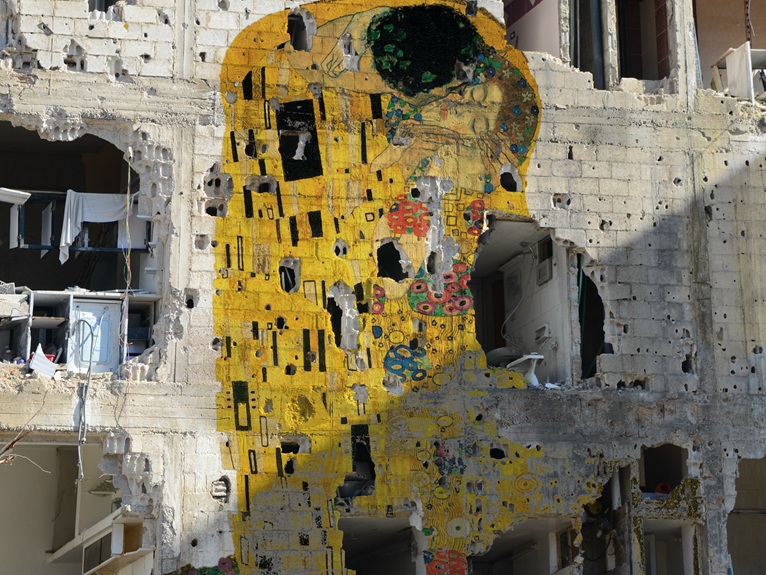 PHOTOGRAPHY_ Syrian artist Tammam Azzam has his first UK solo exhibition this December at Ayyam Gallery London, coinciding with a show of his work at Ayyam Gallery Beirut from 5 December 2013 – 30 January 2014.

Following the outbreak of violence in Syria, Azzam has used his artistic practice to reflect on the worsening situation in his homeland. After living in Damascus during the first seven months of the revolution, Azzam was forced to leave Syria with his family to escape conscription into the army. Following the loss of his studio due to the relocation, the artist - who was previously a prolific painter - has focused on using digital media. He has also increasingly referenced street art in his work, recognising both this and digital media as powerful and direct tools for protest that are difficult to suppress.

In early 2013, Azzam made headlines worldwide when his work Freedom Graffiti (2012) went viral on social media. He used one of the most iconic kisses in art – Gustav Klimt’s The Kiss - to highlight his country's suffering, superimposing this powerful image of love over the walls of a bullet-ridden building in Damascus. The work was one of a series, Syrian Museum, in which Azzam inserted appropriated imagery taken from masterpieces of Western art history into photographic scenes of devastation across Syria. These images serve to focus attention on the destruction of Syria’s cultural heritage and to juxtapose the creative capacity of humanity with the damage it is also capable of inflicting. The series will be on show in London and a new presentation of Freedom Graffiti will be included. 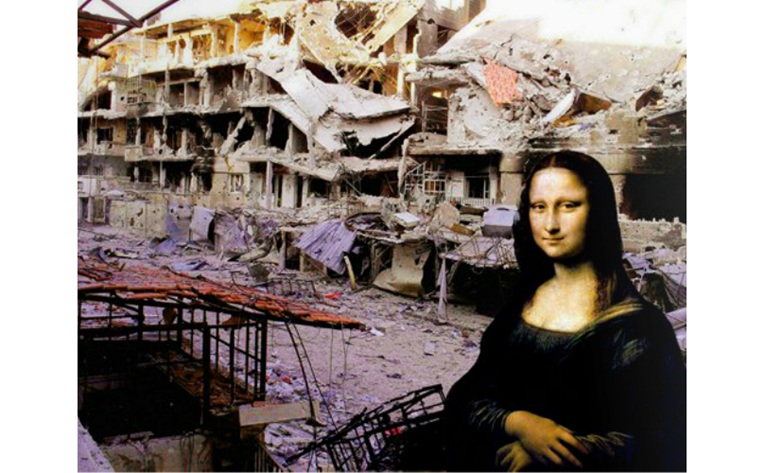 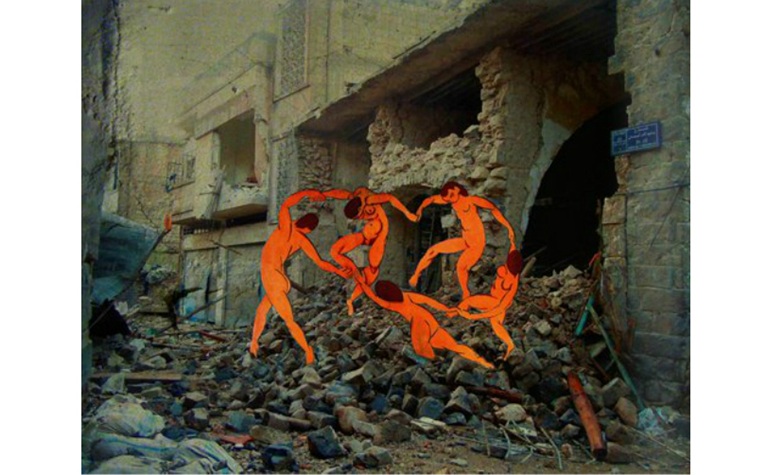 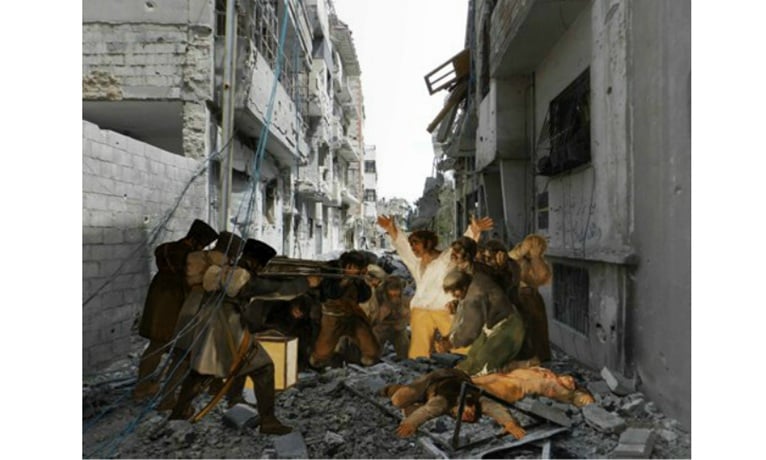 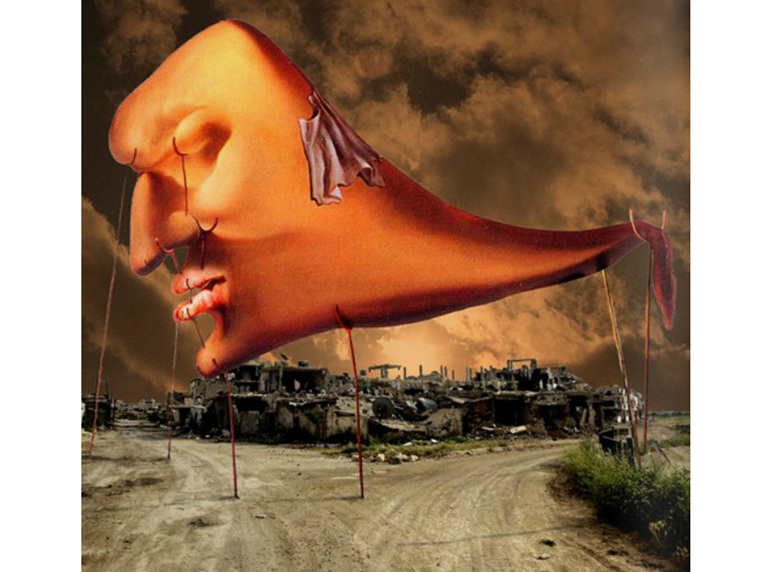 In Bon Voyage (2013), the newest body of work on show, Azzam highlights the fragility of political structures in the wake of revolution. Within his digital collages, brightly coloured bunches of balloons carry war-torn buildings lifted straight from the streets of Damascus high above some of the world’s best-known political headquarters and landmarks. The buildings below also teeter on the edge of destruction: the UN headquarters in Geneva lie poised to disappear into a sink hole, while a whirlpool in London’s the River Thames threatens to swallow up the Houses of Parliament. 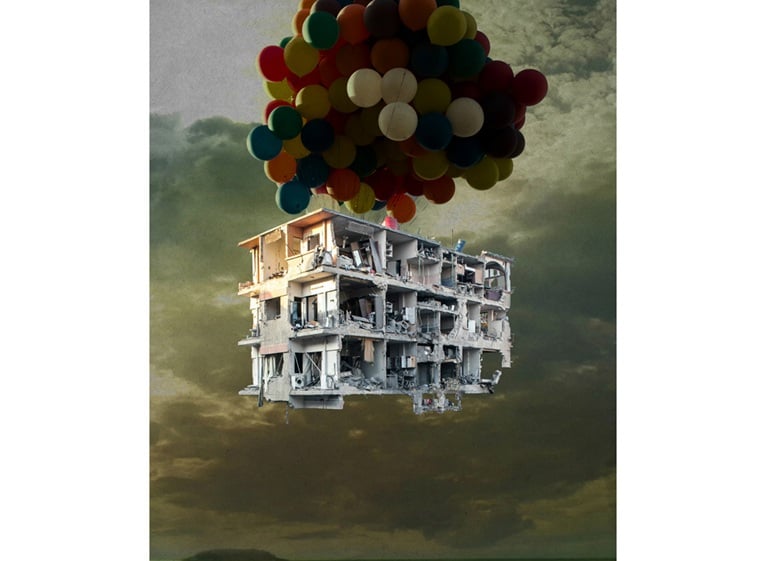 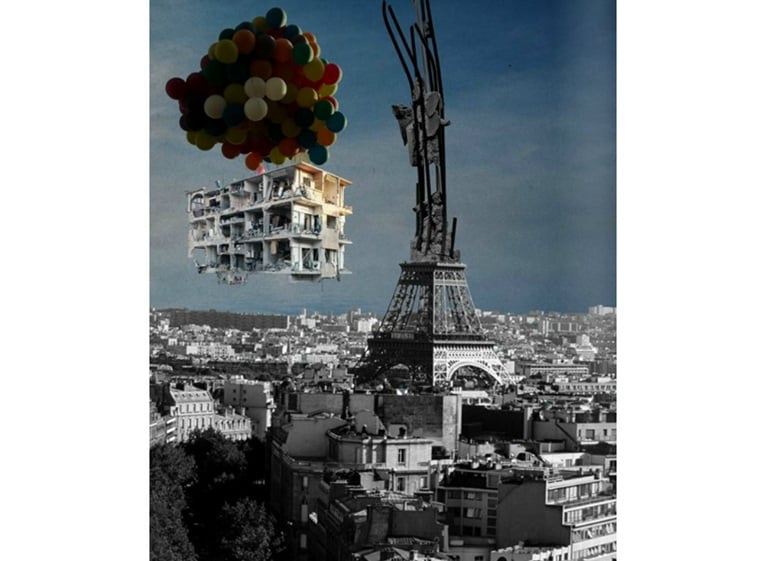 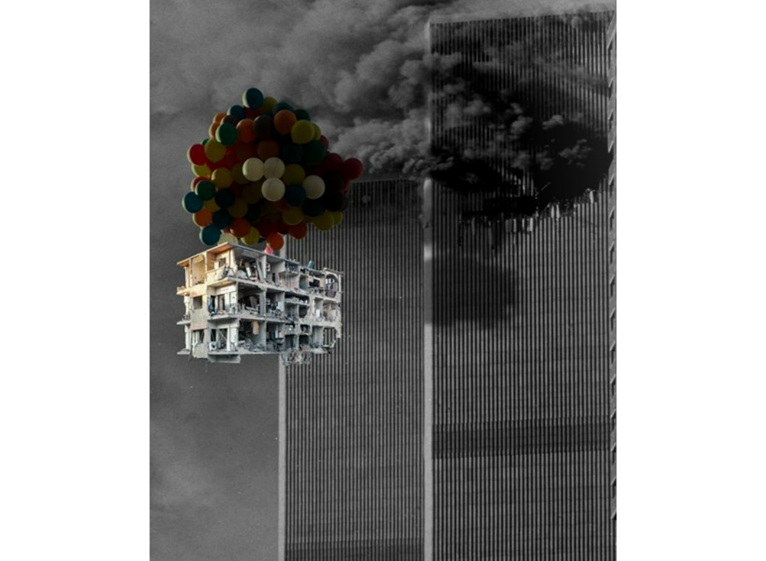 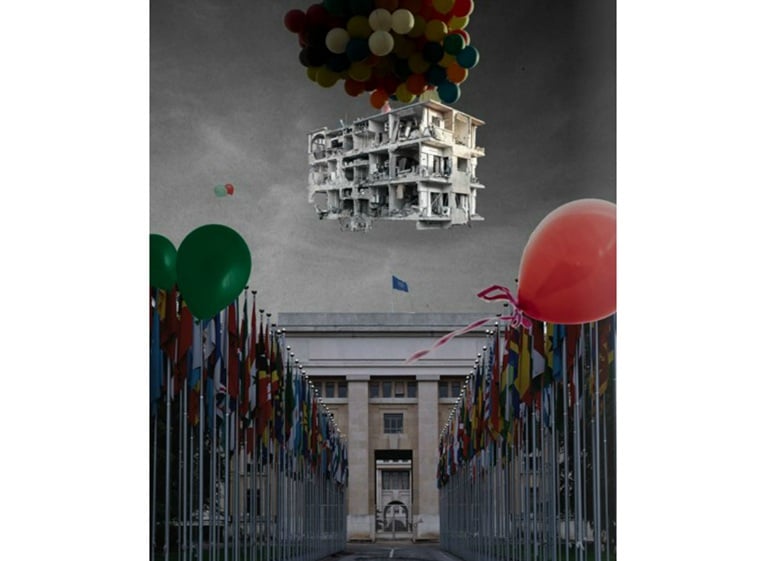 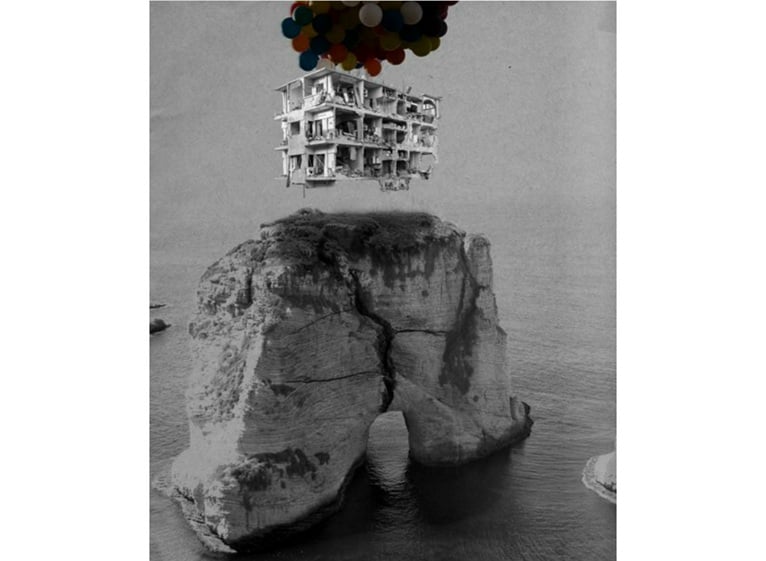 In both Syrian Olympic and Exit (both works 2013) Azzam adopts the stencilled imagery common to street art, bringing together universally recognisable symbols on concrete-like surfaces to articulate the situation in Syria. In Exit, a row of armed soldiers stand to attention while a hunched over figure carrying a sack humbly edges out of the frame, echoing the continued exodus of Syrians from their homeland. 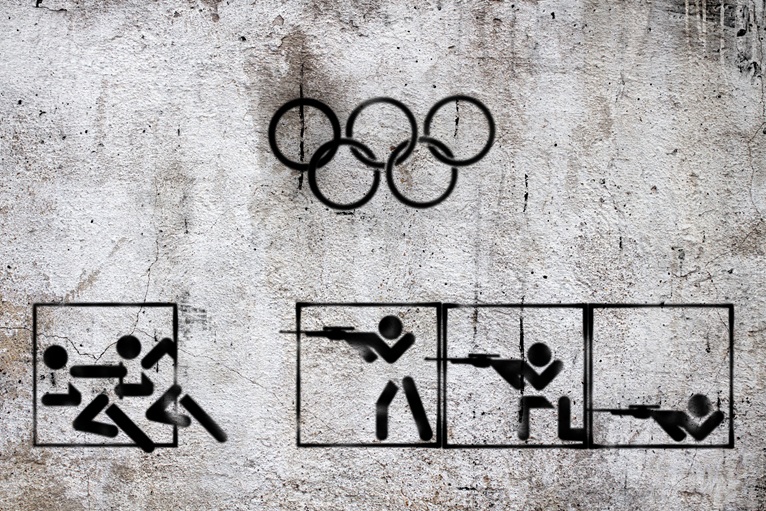 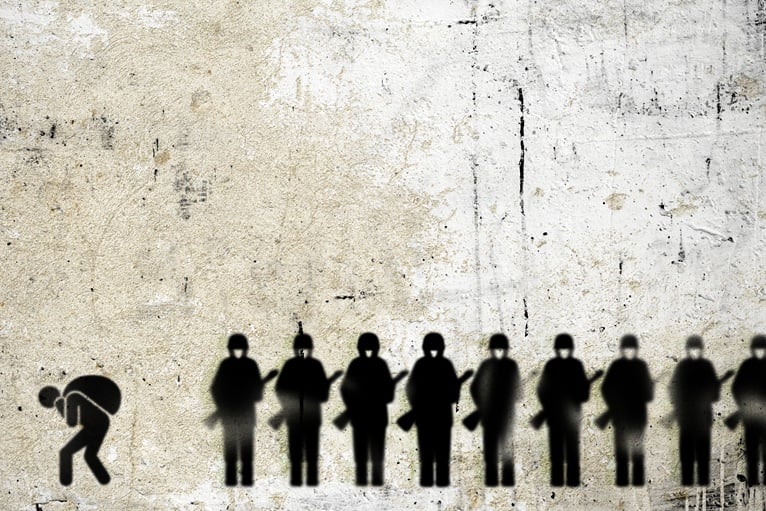 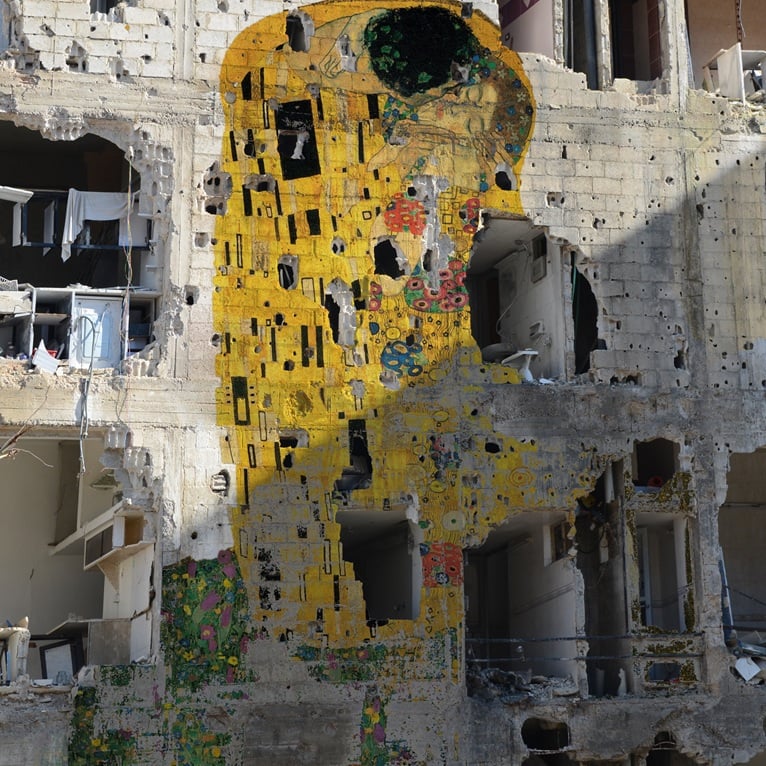