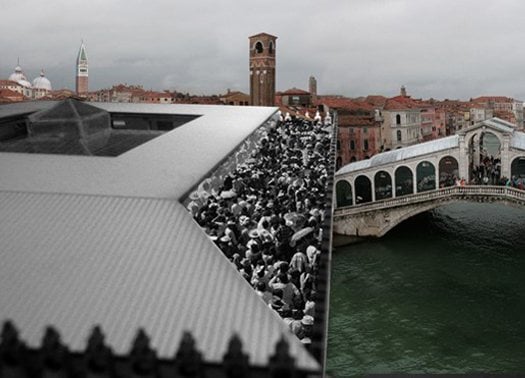 The City Council and the Treviso fashion group have reached an agreement for the project of the Benetton's new Rialto megastore. It has been designed by Office for Metropolitan Architecture (O.M.A.) Rem Koolhaas and will occupy the building currently housing the post office opposite the Rialto bridge.

The building, called Fondaco dei Tedeschi, was erected in the 16th century as a trading post for German merchants. It currently houses the most incredible (in in some ways the most improbable) post office in Italy. Its enormous courtyard represented a surprising exception in the city's maze of lanes and squares. It was even more surprising that this place housed a public office, moreover much too small for its boots!

In 2008 the Benetton Group purchased “Il Fondaco” for 53 million Euro to create a "megastore with a strong symbolic impact". The project envisages controversially adding escalators to the courtyard, a new panoramic inset terrace, refurbishing the rooflight to create another floor and demolishing parts of the balcony. To tell the truth, the view chosen for the rendering of the terrace, which has got everyone talking and which is reproduced above, is a bit misleading.

The project inevitably left Venetians either outraged or infuriated, but viewed from a different angle, it is much less invasive and was obviously well thought out. Use of the building for commercial purposes is, in itself, in line with its original function and with the past and present vocation of the city.

This place, as we know it today will be missed by the many tourists who queued up here puzzled by the red tape that has even found its way into Italian post offices. It will be missed even more by the Venetians who used to go there to pay their bills or pick up the post, looking for a gap where they could “park” their gondola in some side canal but it will be missed most of all by those who sought solace in this relict of public space, a haven of peace in the most crowded city in the world.

The future mezzanine used to house the postman's bar where you could buy a sandwich for 2 Euro and an espresso coffee for 70 cents, sitting at a table in a period building with a view over Rialto!