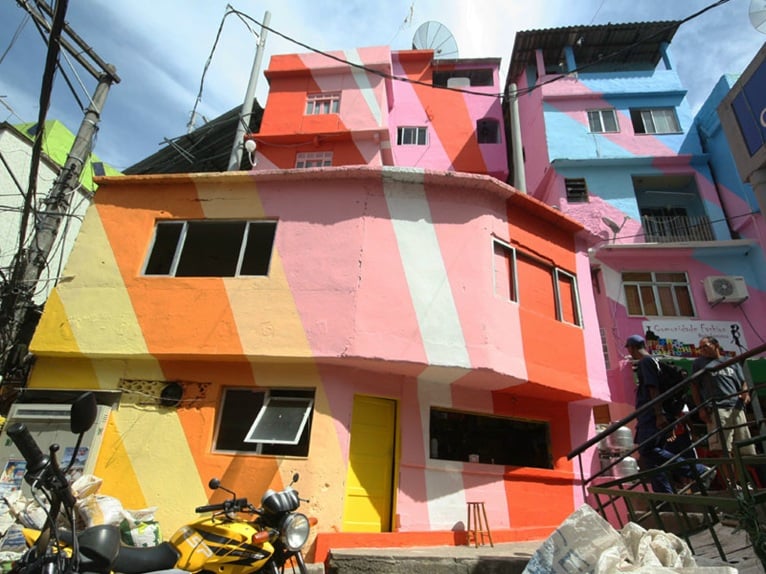 INTERVIEW _Thinking of a real improvement in an awkward environment like the favelas and slums is probably one of the hardest challenges of architecture in these days. Many factors are involved in the resolution to guarantee better living condition to the inhabitants: political interest, economical resources and planning decisions.

Many times discussion about these topics seems a kind of utopian challenge, often forgotten behind bigger and more profitable plans like international events.
In my opinion, smaller proposals with closer dialogues with the people truly into the matter are probably more effective, although inconclusive. 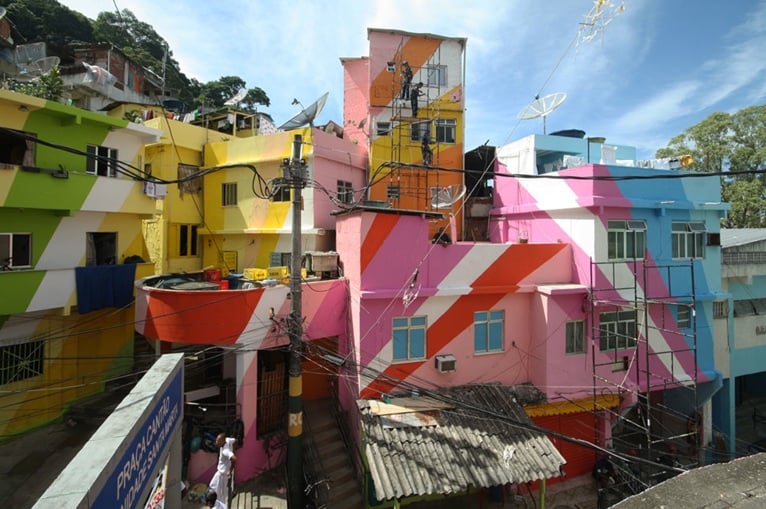 “Not just to beautify, but also to create a dialogue with their surroundings”

I had the opportunity to chat with the artist about the projects and the aspirations for the future.

How was the idea of Favela Painting Projects born?

When we were in Rio de Janeiro filming a documentary for MTV about the role of hip hop in the lives of the youths in the slums of Brazil, we became very inspired by the attitude of the inhabitants. They seemed very positive and always busy with somehow moving forward. The message in their music was about having pride about living in a slum and always trying to somehow better your situation. But this feeling is also embedded in the architecture and structure of the favelas. All self built and mainly self managed, there just seemed to be an overall attitude of fighting for a better tomorrow, using creativity and optimism. This inspired us to think whether there could be ways for us to help them get this message across. 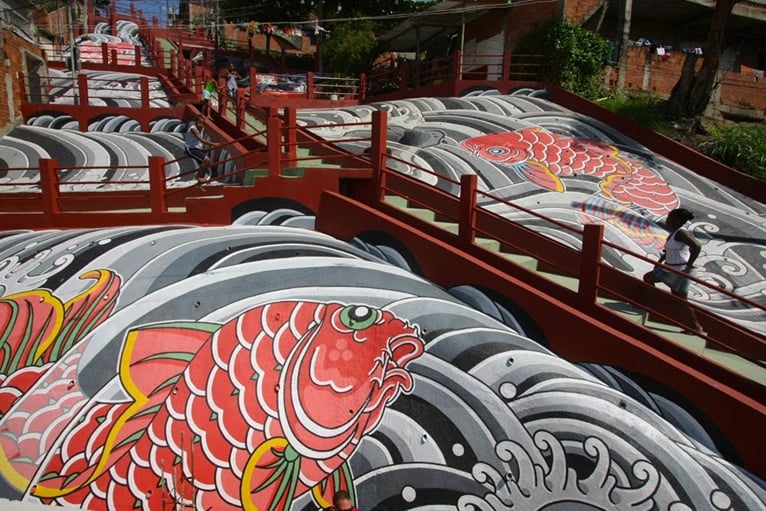 Did you have any graphic references to develop the project?

As we started without any idea on how to approach these projects, our first painting took about 3 months and covered only three houses with a total of 150 m2. Our second one, the river with Koi, a total of 2000m2...took about 8 months. For the last painting, more than 3 times the size (7000m2) - we used a much simpler design and included a much larger group of painters, so the actual painting only took about a month. Every step in the project, we learn how to be more efficient and how to involve more people. Also, the choice of design is a very important factor, not only for esthetical reasons, but also regarding efficiency. Because of this, Jeroen spends a lot of time experimenting with different models and sketches, coming up with designs that are effective and easy to apply with a large group of people. 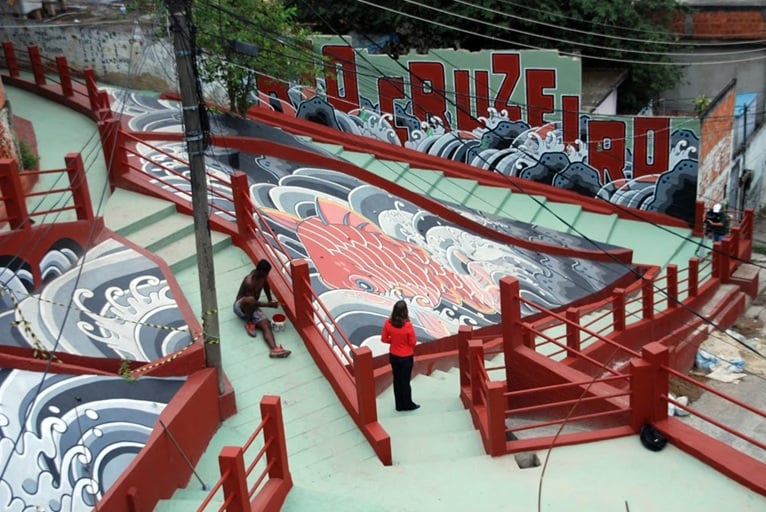 The world's attention is focused on Rio for the Olympic games, do you think that the council is doing enough for the favelas communities?

We haven't been around enough to know much of what is actually going on during the preparations but you read things here and there. Mostly about houses being torn down and people relocated.

What is the approach of the communities to the Favela Painting Projects?

Everywhere we have painted, be it Rio de Janeiro or Philadelphia, people have embraced the projects in a very strong personal way. Sometimes because of the way it looks, sometimes because we offered some alternative, or sometimes simply because we moved in and spent our time in communities that others might avoid. We have celebrated our birthdays there, made lifelong friendships, got drunk. We make most design decisions together with the building owners and users. We go door to door and talk about the project, discuss their preferences. It’s a very long process, but the only way one can afford to go to someone’s neighborhood with such an immense project. It has to become everybody's project first. 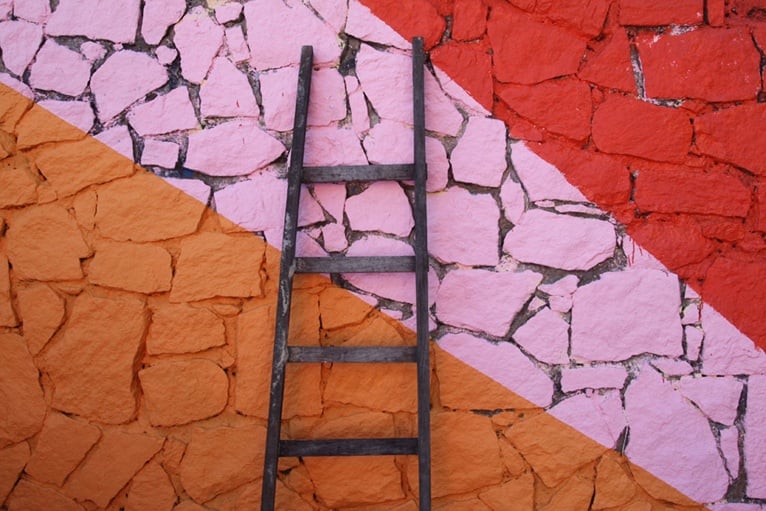 Any new projects and collaboration in the near future?

We have been invited to many countries, from Colombia to China to discuss potential projects. Philly Painting was the first project we did ‘by invitation’. It was an initiative from the Philadelphia Mural Arts Program, working together with several partners. We like to think that the project idea can be ‘translated’ to other cities, but it’s important to realize that every place demands a different approach.
If the Kickstarter funding with the help of the crowd permits, the Favela Painting project could spread out to multiple areas in Rio de Janeiro, and possibly, to other cities in Brazil. 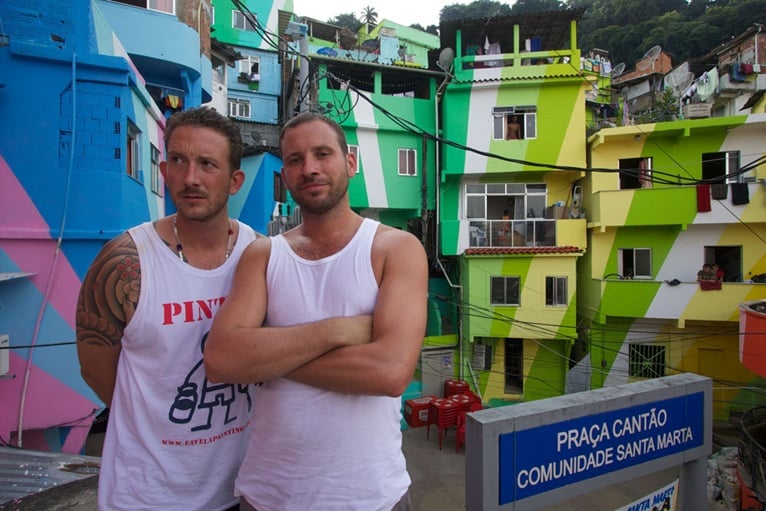