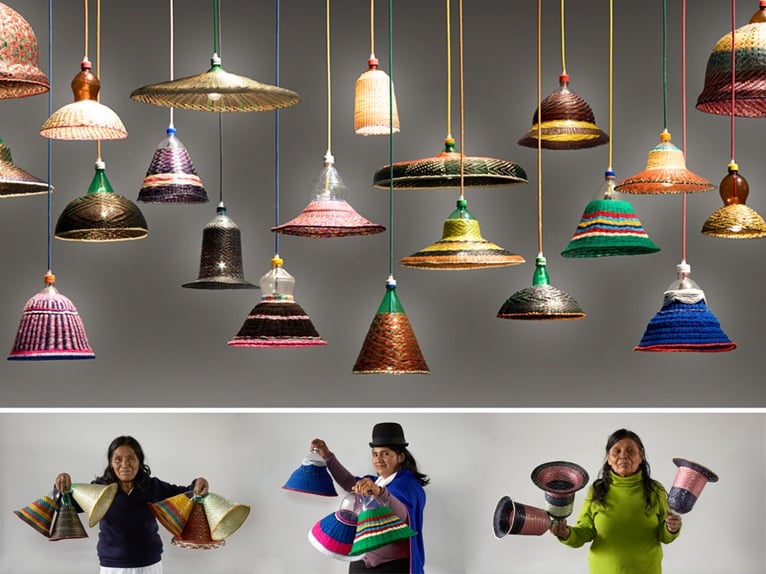 DESIGN_Alvaro Catalán de Ocón is a product designer that was able to fuse one of the most produced industrial objects like plastic bottles with one of the traditional crafts most rooted to the earth. The bottle changed from being container for liquids into being ceiling lamp: it became a Pet lamp. 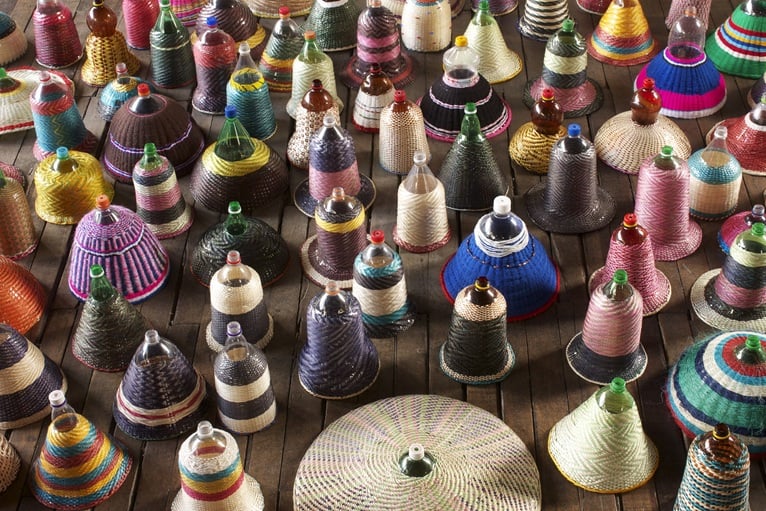 “In the Summer of 2011, on a visit to Colombia, I was invited to form part of an attractive project focussed on the reuse of plastic bottles PET. I could see that the pollution generated by the plastic bottles that we use every day is a problem that affects us on a global level. It was because of this that I decided to develop a project that would provide answers, from a design viewpoint, to this global issue.”

A growing quantity of plastic waste is invading every corner of the plannet, PET bottles have a very short useful lifespan - which seems scandalous when you consider the effort required to produce them - so they believe in reuse as the counterpoint to recycling. Their objective was to think about the validity of the object over the long term, and to avoid it becoming obsolete after only a few minutes. The right manipulation of the bottle would allow its transformation into a coherent, functional and desireable product for the market.

They took advantage of the bottle top to join the electrical components to the lamp shade, the neck as the structure and the body of the bottle as a surface on which to weave. The principle of weaving is reinterpreted and the surface of the bottle is converted into the warp through which the artisan weaves the weft. 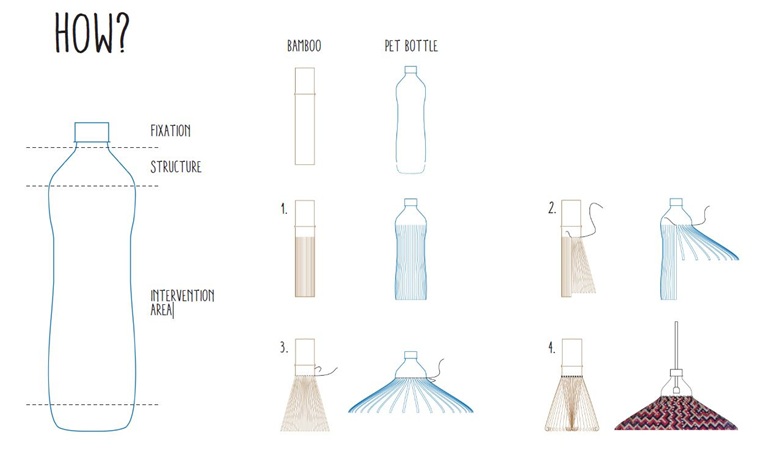 The starting point regarding how to manipulate the bottles came from analysis of the bamboo stirrer from the Japanese bamboo tea ceremony since both objects had many elements in common: they are both made from a single material and made in one piece. Furthermore, in form they have a structural element (the knot of the bamboo) and a flat surface that can be spun. Weaving on this warp, the piece acquires and maintains its desired form.

Analysing the bottle as an industrial piece, we can see in it traces of its maunfacturing process. Therefore, the lines where the molds meet serve as horizontal and vertical references for cutting and spinning. 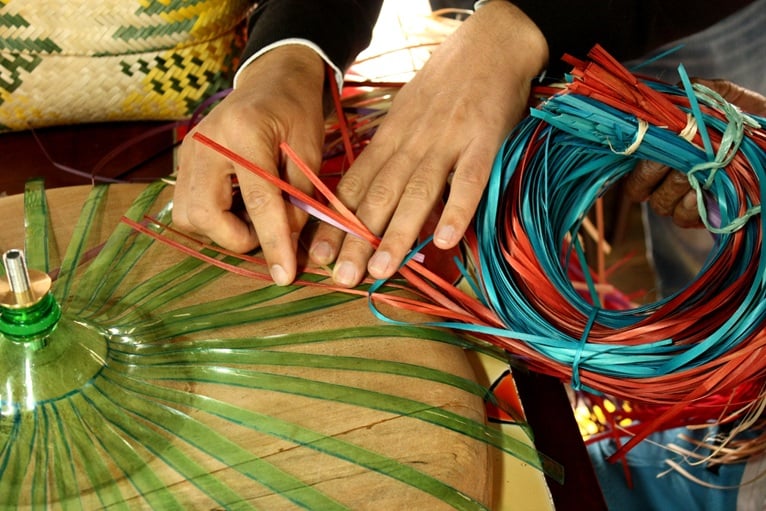 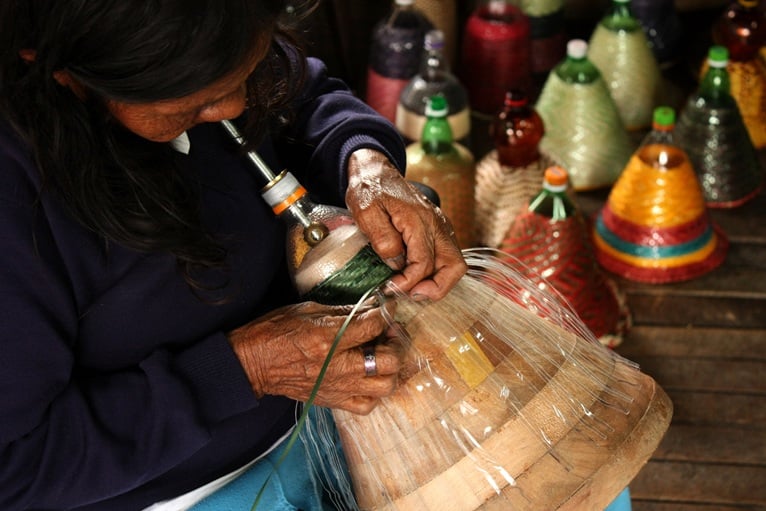 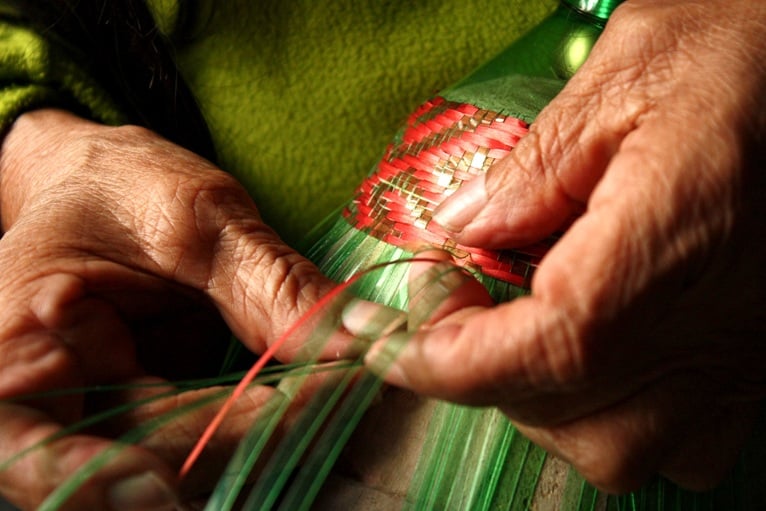 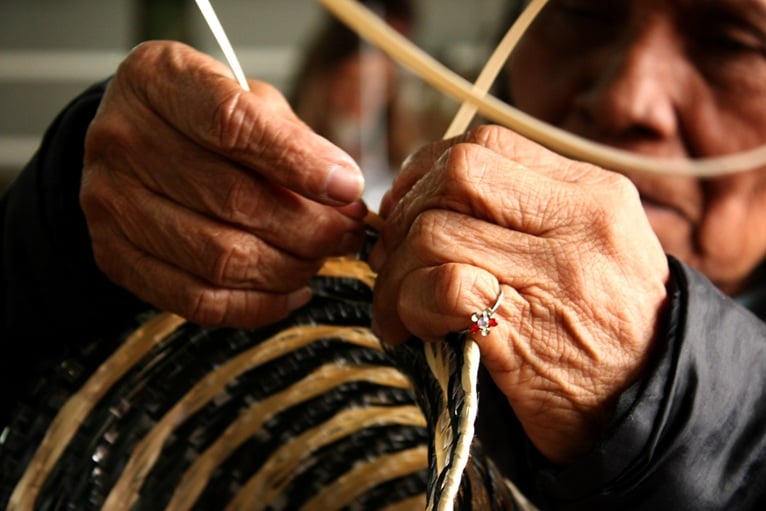 How do this project became an industrial production??

"From Madrid, the challenge as industrial designers was to transform this half-finished product, the lamp shade created by artisans in Colombia, into a product ready to be sold on the market: the lamp.

Given that each lamp shade is unique we chose to offer individual lamps as well as big installations. For this we designed an adornment which is cilindrical and made out of mechanised iron and later phosphated, like a black hole from which all the different cables fall.

The choice of cable was fundamental to connect in a natural way the language of the lamp shade to the cilinder and to the different electrical components. For this we decided on a textile cable, specially made for us, in vivid colours and with the perfect texture and fall.

Avoiding becoming stylised, we wanted to keep the protagonism of something as characteristic of the bottles as the bottle top and its neck. The transparency of this last part allows one to make visible a ring of engraved iron, giving weight, authenticating the lamp and allowing the client to know the origin and history of each lamp." 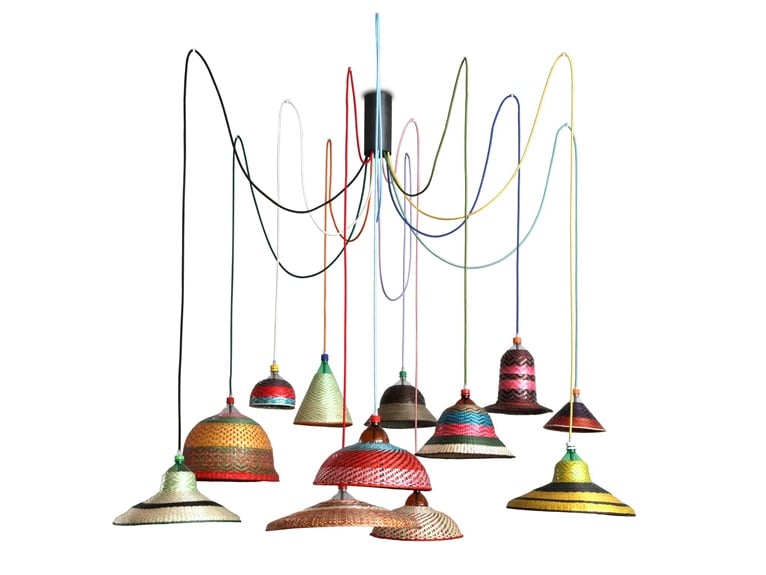 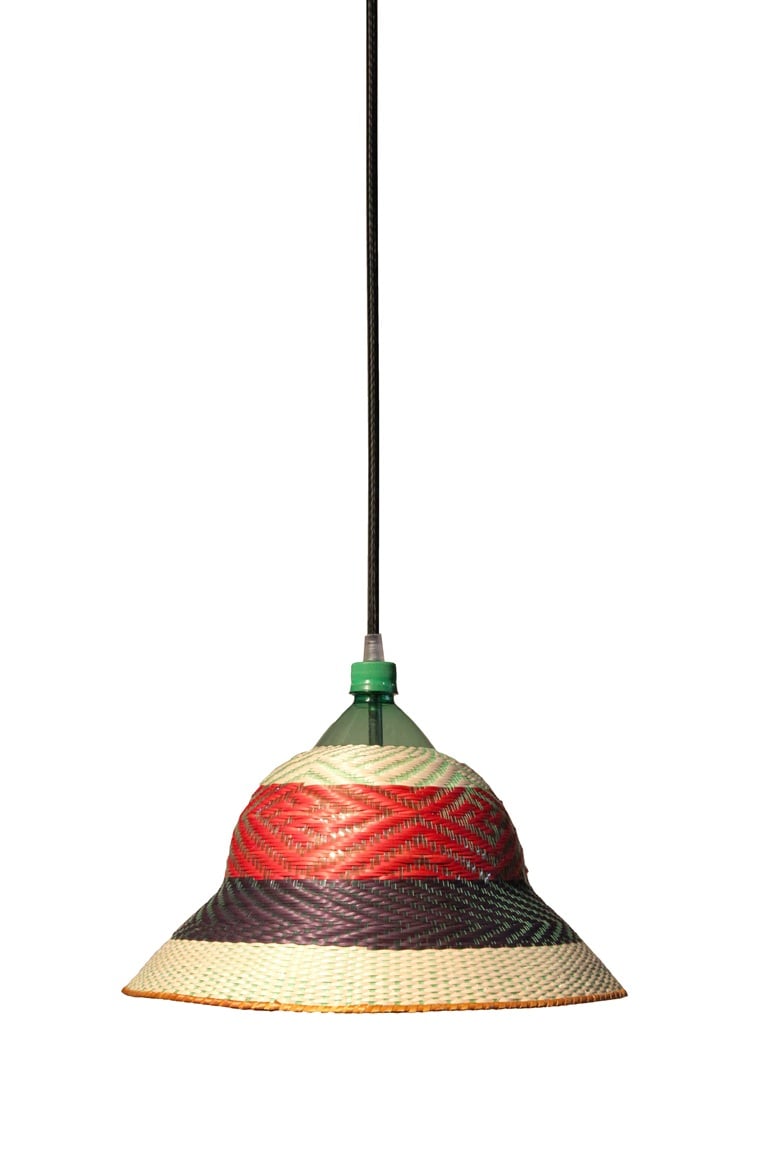 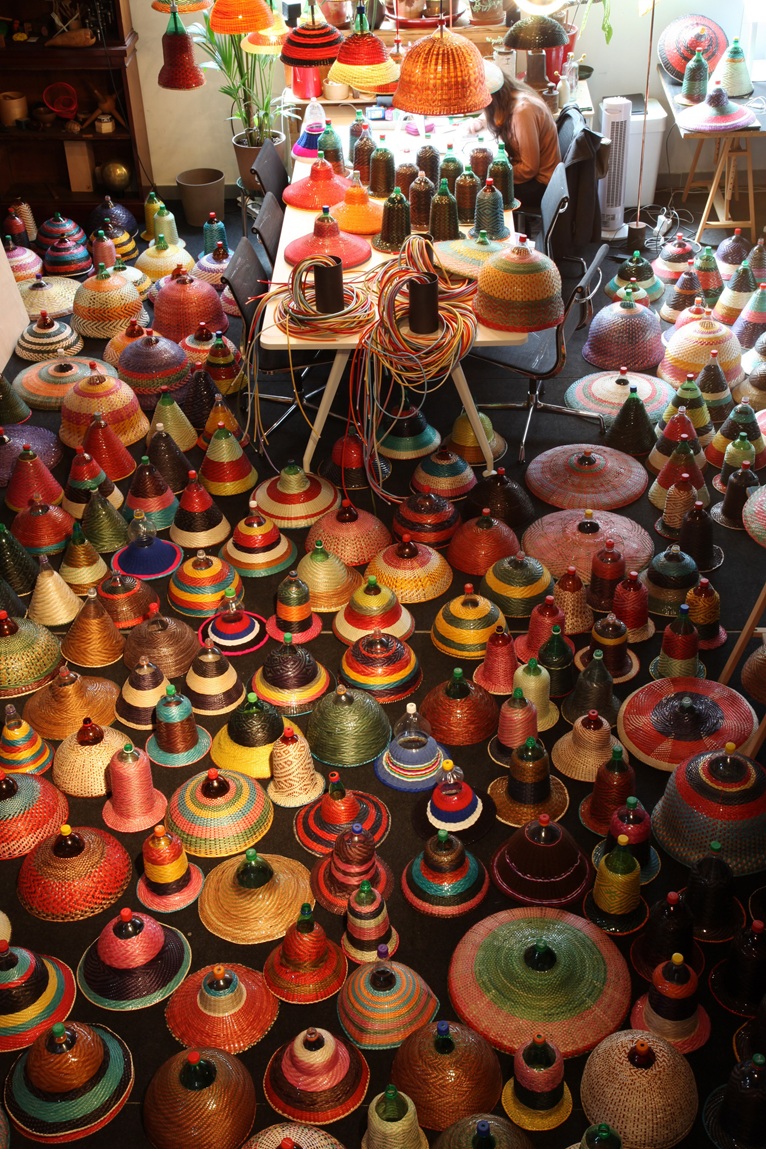 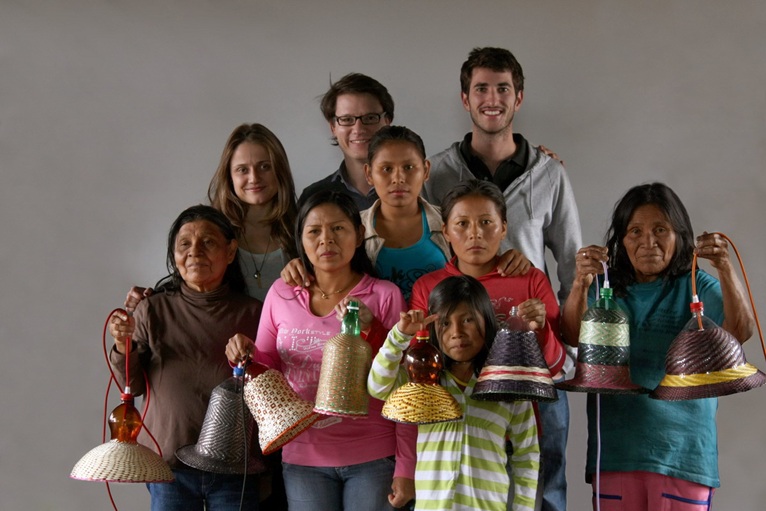 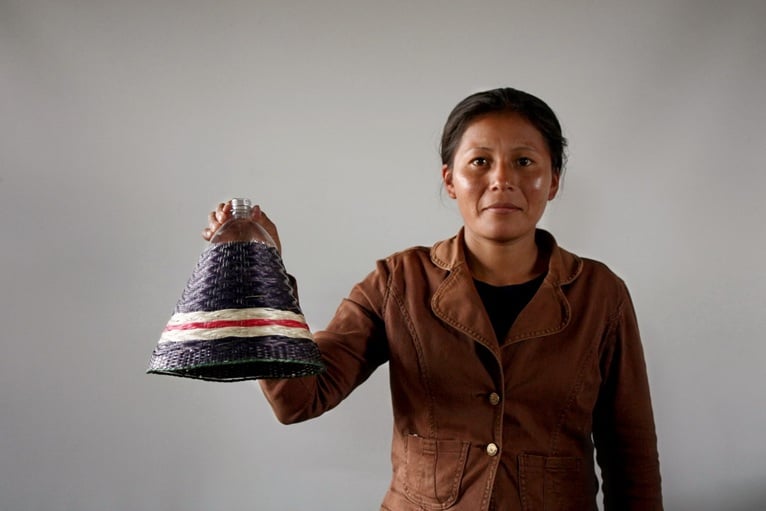 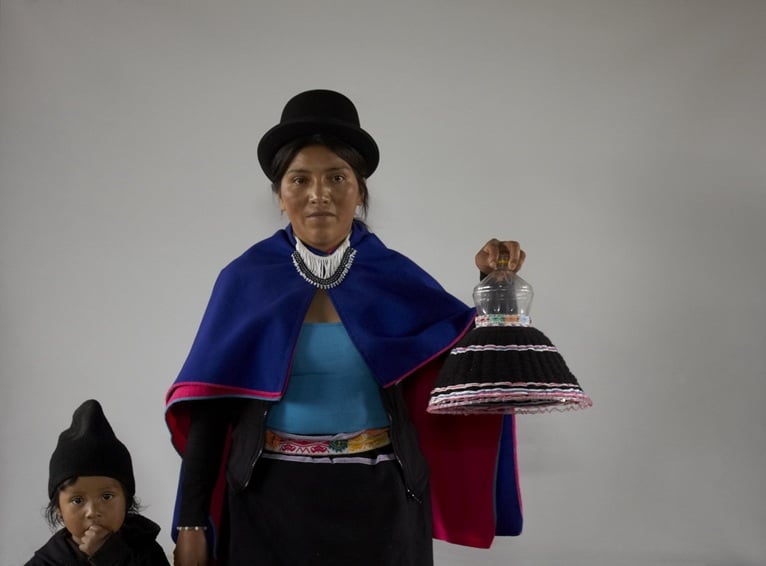