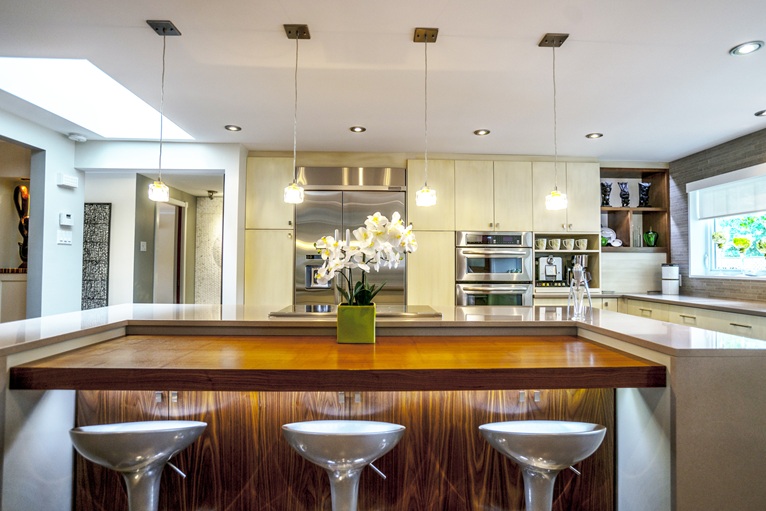 Like Julia Child, the famed American chef and TV personality, Pierrefonds interior designer Tania Scardellato loves to cook. And like the towering Child, whose kitchen was customized with raised counters to accommodate her height of six feet, two inches, Tanya had to customize her kitchen, But Tania did it by lowering the counters because she is five feet even.

And just to complicate the issue further, Tania designed her new kitchen to take into account that her husband Jean Bernier is six feet, four inches.

“We had to play with certain heights of the counters and the island. Some are at 33 inches and some are at 38 inches,” says Tania, whose company TOC Design (touch of class) for homes and interiors was founded in 1995.

“I mostly work where the island is and that is 35 inches high and he mostly works where the sink is. He does the dishes – he cleans up behind me,” Tania says with a laugh.

Her kitchen was completed last year after engulfing the adjacent dining room and boosting the space from 156 square feet to 271 square feet.

“When you are entertaining everybody is going to get in the kitchen. So I said let’s open it up so I can be with my guests when I am cooking,”

It is a showpiece for people who want and need plenty of storage space and tricks to reduce back-bending lifts of heavy appliances.

For example, the food processor sits in a cabinet under the island and can be raised to counter level with a finger thanks to a metal lift. Special cabinets were built into the island to accommodate five sets of dishes that Tania uses for entertaining.

Normally, a lunch counter on the island is 12 inches deep, she says, but hers (in walnut) has been expanded to 20 inches allowing people to “be very comfortable.”

And underneath the counter and its quartz top, the cabinets have been deepened to 16 inches to accommodate some of those sets of dishes, the rice cooker and large mixing bowls.

“Everything should have a home. It helps you organize your space, and you would be surprised how much time this saves” she says.

Espresso and regular coffee makers rest on a pull-out shelf of their own under the cabinets and nearby a roll top cover hides other small appliances.

As you might have gathered, the island, a generous 10 feet two inches by four feet nine inches, is a busy place, but there is still more going on.

It also contains a 36 inch GE monogram stovetop with six burners and a wine cellar at the end open to the new dining room. She will receive up 50 guests for a buffet meal who can help themselves while Tania whips up Italian dishes so loved by her father, French cuisine embraced by her mother and Mexican and Thai picked up on travels.

Beside the cooler is a drawer containing corkscrews and bottle openers so guests can do the honors to the bottles while Tania focuses on the preparing her dishes.

Another nifty feature is the concealed ventilation system, which rises out of the counter behind the stovetop at the push of a button – another innovative space saver. With the ceiling only seven feet five inches from the floor, light flows unimpeded from the enlarged windows above the sink toward the far end of the island.

The house was originally built as a sugar shack in 1965 and Tania bought it 10 years ago. She and her father did an initial renovation – work that lasted nine months and cost $30,000 at the time.

The new kitchen, part of a complete house and office renovation by Tania’s TOC design’s construction team, has taken a small, dark kitchen with lighting and storage issues and turned it into a sleek, modern space that serves the needs of a couple and is convenient for hosting large gathering of friends and family. 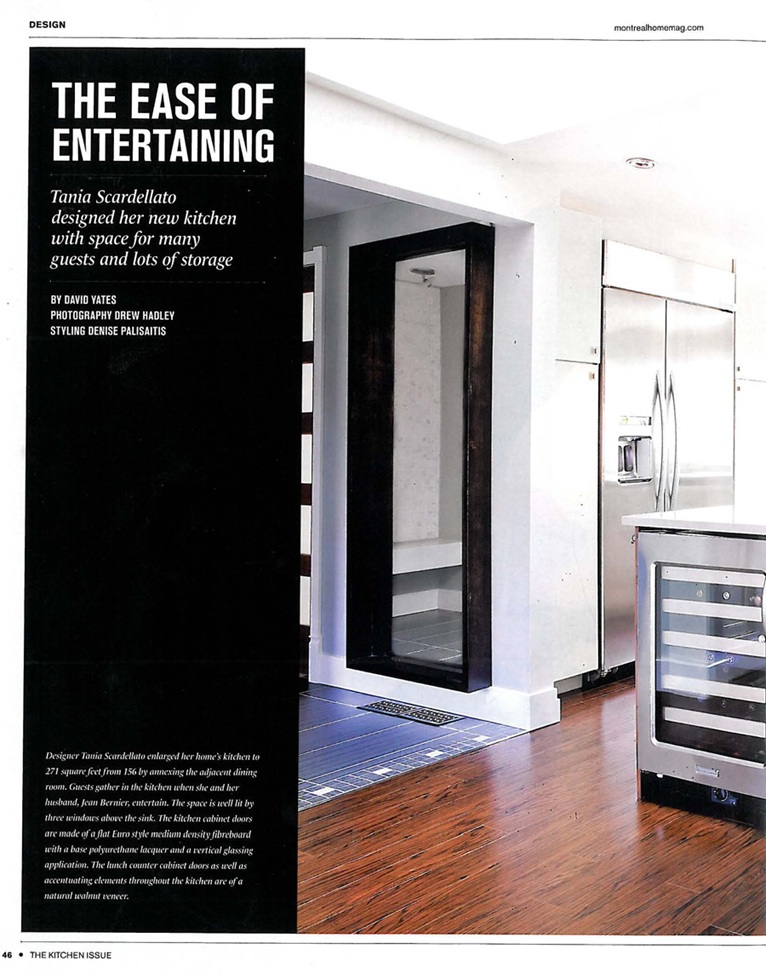 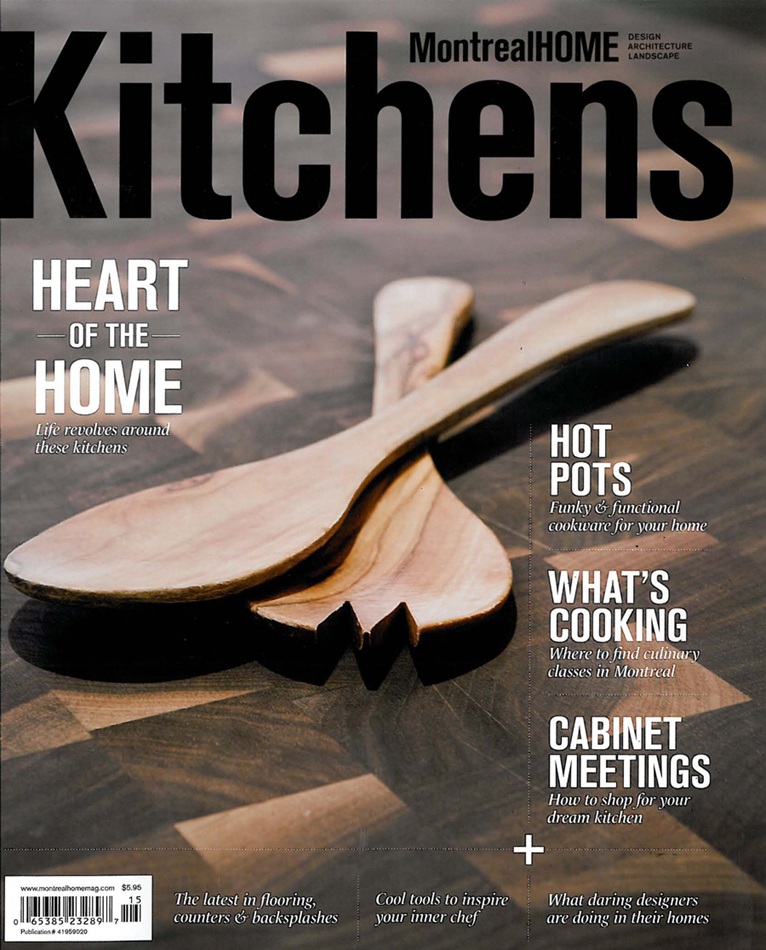 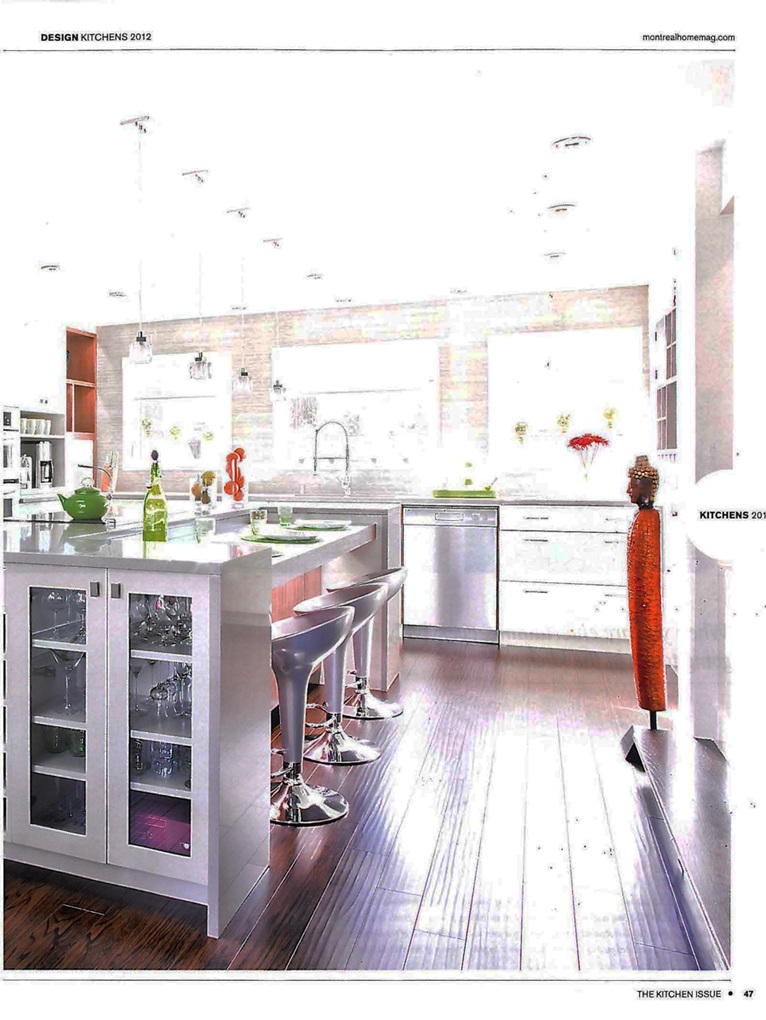 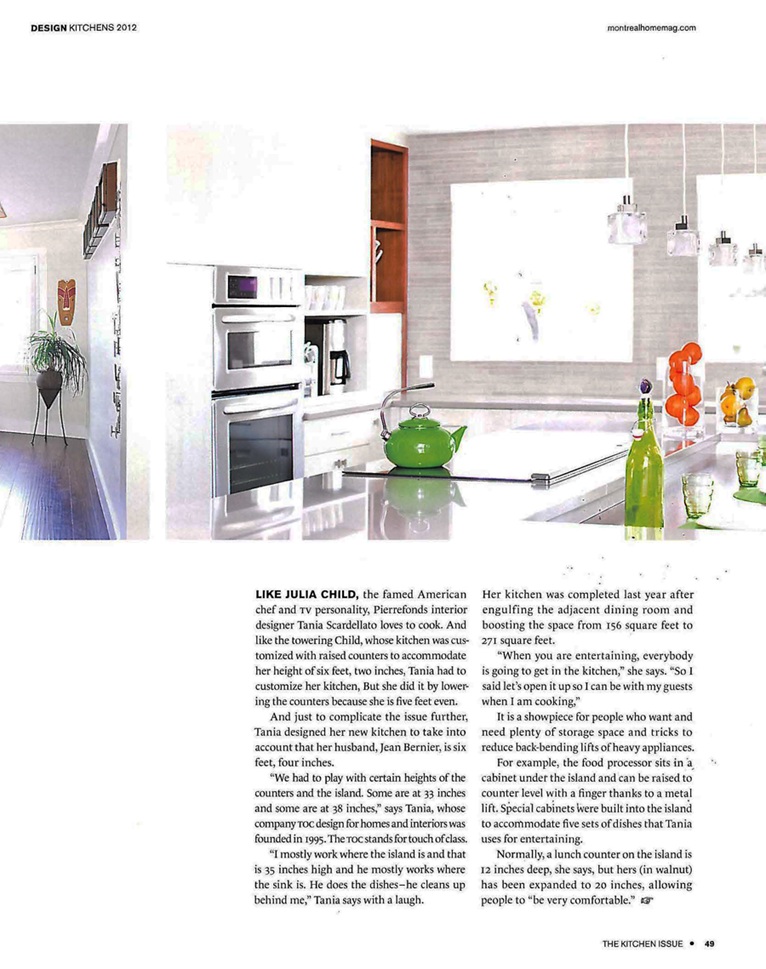 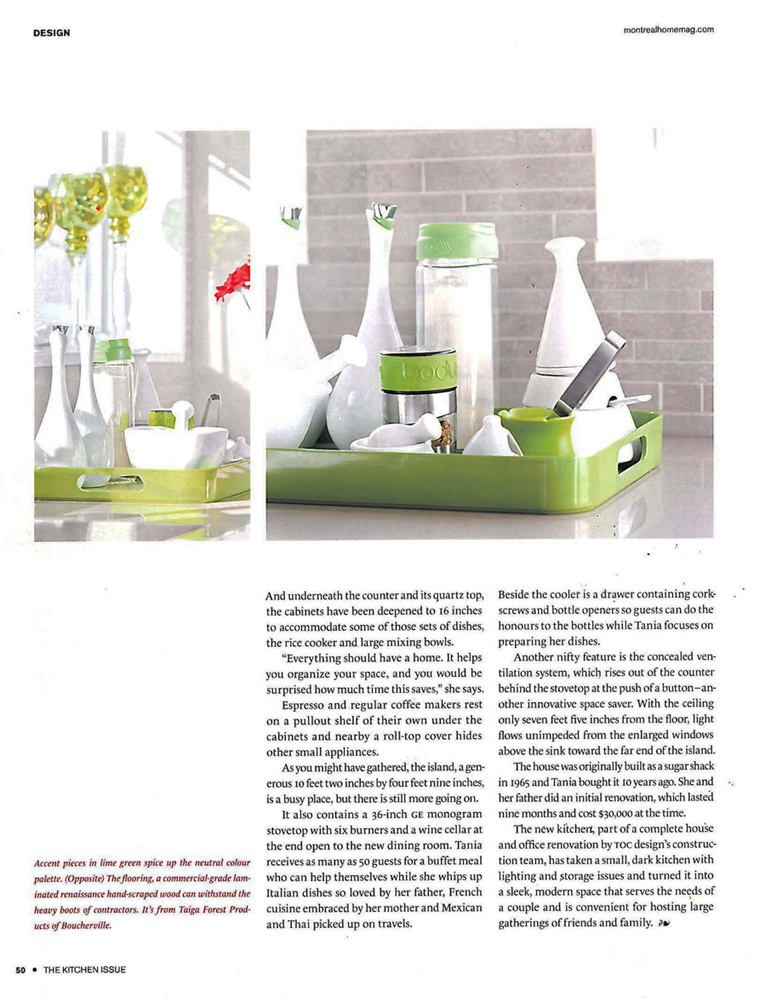 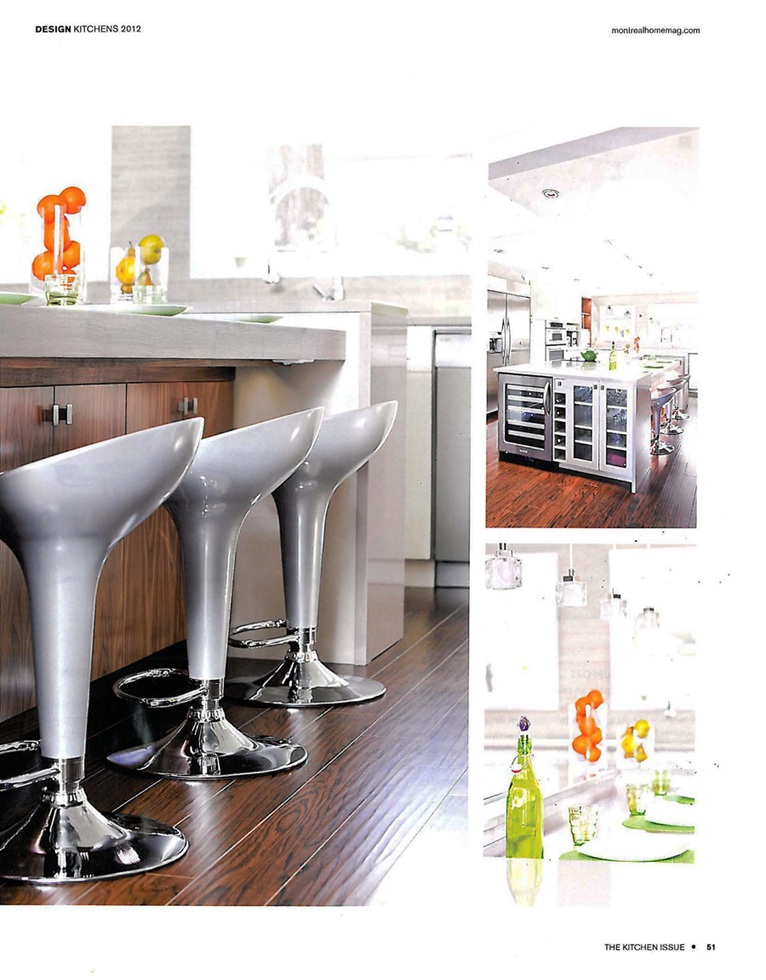 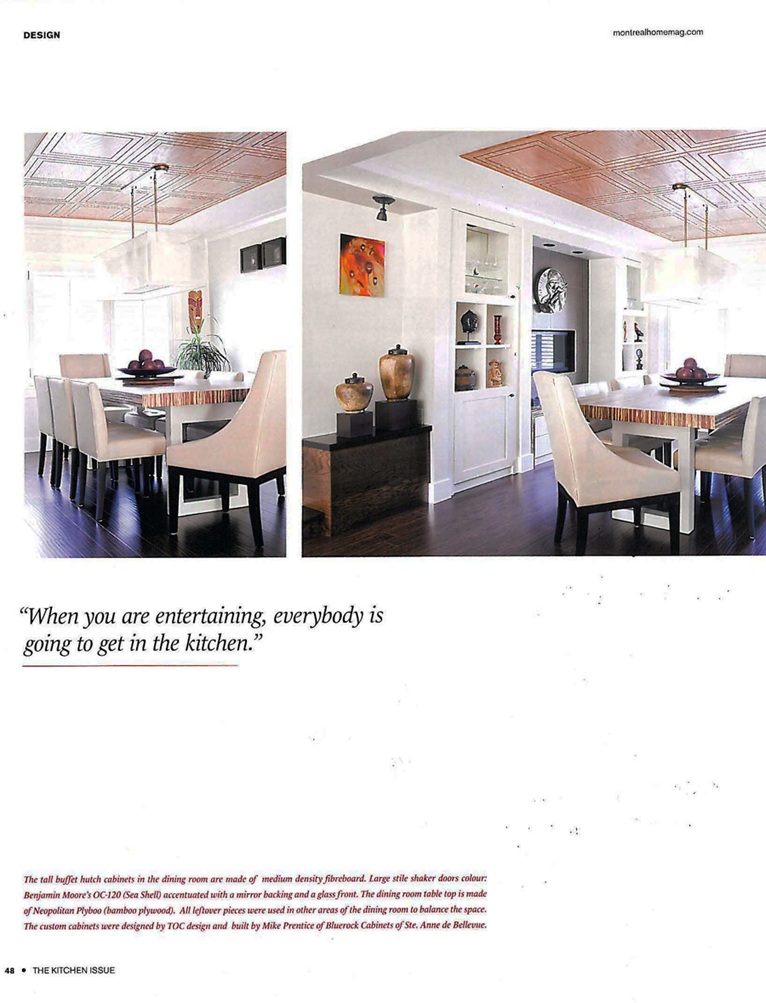